What can you assume that the speed limit is in an urban or residential district without speed limit signs?

The standard speed limit is 30 mph in urban/residential areas in Georgia, unless otherwise posted.

In case of an accident, you must notify law enforcement if:

In Georgia, you must notify law enforcement after an accident if there is property damage exceeding $500 or if anyone is injured/killed.

Are drivers over 21 years old permitted to text or read messages when driving?

Drivers of ALL ages are strictly forbidden from texting or reading messages when driving.

"Bicyclists in Georgia are entitled to a full lane width". Is this statement true?

Bicyclists need, and are entitled to, a full lane width. Respect bicyclists in traffic and keep in mind that they’re more vulnerable in traffic.

Driving with a BAC of 0.08 or more is considered a DUI. The penalties include license suspension, fines, community service and possible jail time.

Driving with a headset is:

In Georgia, it’s illegal to wear a headset or any other in-ear device that impairs your hearing. Sound queues are very important when driving, and without them you will have a hard time knowing what is happening around your vehicle.

You’re caught littering on the road from your vehicle. What may happen?

Littering on any public OR private property in Georgia is against the law. The penalties include fines and possible jail time.

When parallel parking on a level street, your vehicle must be:

In Georgia, your vehicle must be no more than 18 inches from the curb when parallel parking on a level street.

You see a vehicle parked 20 feet from a fire hydrant. Is this permitted?

In Georgia, parking is prohibited within 15 feet of a fire hydrant, but you may stop briefly to drop off/pick up passengers. The reason being that the fire brigade need to have an easy and unobstructed access to available fire hydrants.

When are you NOT required to stop for a stopped school bus with its flashing red lights activated?

The only time you aren’t required to stop is when you’re traveling in the opposite direction from the bus on a divided highway (separated by a median strip).

A driver pulls out of a driveway in front of you, forcing you to brake hard. How should you react?

Don’t react aggressively, all drivers make mistakes. Be alert near driveways, parked cars, and whenever other road users can cross your path.

What is the purpose of the oil dipstick?

To check the oil level:

Which of the following signifies defensive driving?

Defensive driving is about preparing for the unexpected and not being taken by surprise. Drive in traffic in a way that doesn’t anger, offend, or cause any danger to others.

Ask yourself what you would be irritated about in traffic and understand that others often feel the same. Most people are, for example. angered by other drivers tailgating them and/or moving into their safety margin.

How can you calculate the following distance?

How should you use your GPS so that it doesn't distract you when driving?

A GPS is useful when driving on unfamiliar routes. Don’t adjust your GPS while driving as it will severely distract your attention from driving.

When you’re hydroplaning, you will often skid uncontrollably due to your vehicle ‘surfing’ on top of the water.

Whenever driving a new vehicle (e.g. a friends vehicle):

Before you drive any vehicle, make sure that you’re comfortably seated and able to reach all the controls. If you think that your friend will be upset, you can always change back the seat and mirrors to their original position when returning the car.

The mirrors should be positioned so you can scan the area around your vehicle without changing your position.

Your car plunges into water of unknown depth. What should you do?

When crashing into a body of water, you need to get out of the vehicle immediately - the vehicle will only float for 30 seconds up to 2 minutes. If unable to open the window, break it using nearby tools or by kicking out the window.

You’re being passed by another vehicle. What should you do?

Don’t increase your speed while being passed. If possible, you should keep to the right and leave space in front of your vehicle so the other driver can return to the right lane after passing.

In what direction must you drive in a roundabout?

Roundabouts allow for traffic to drive in one direction only. Always enter on the right side of the central island and you’ll drive in a counterclockwise direction.

Entering or exiting in the incorrect lane can be all it takes for a crash to occur. 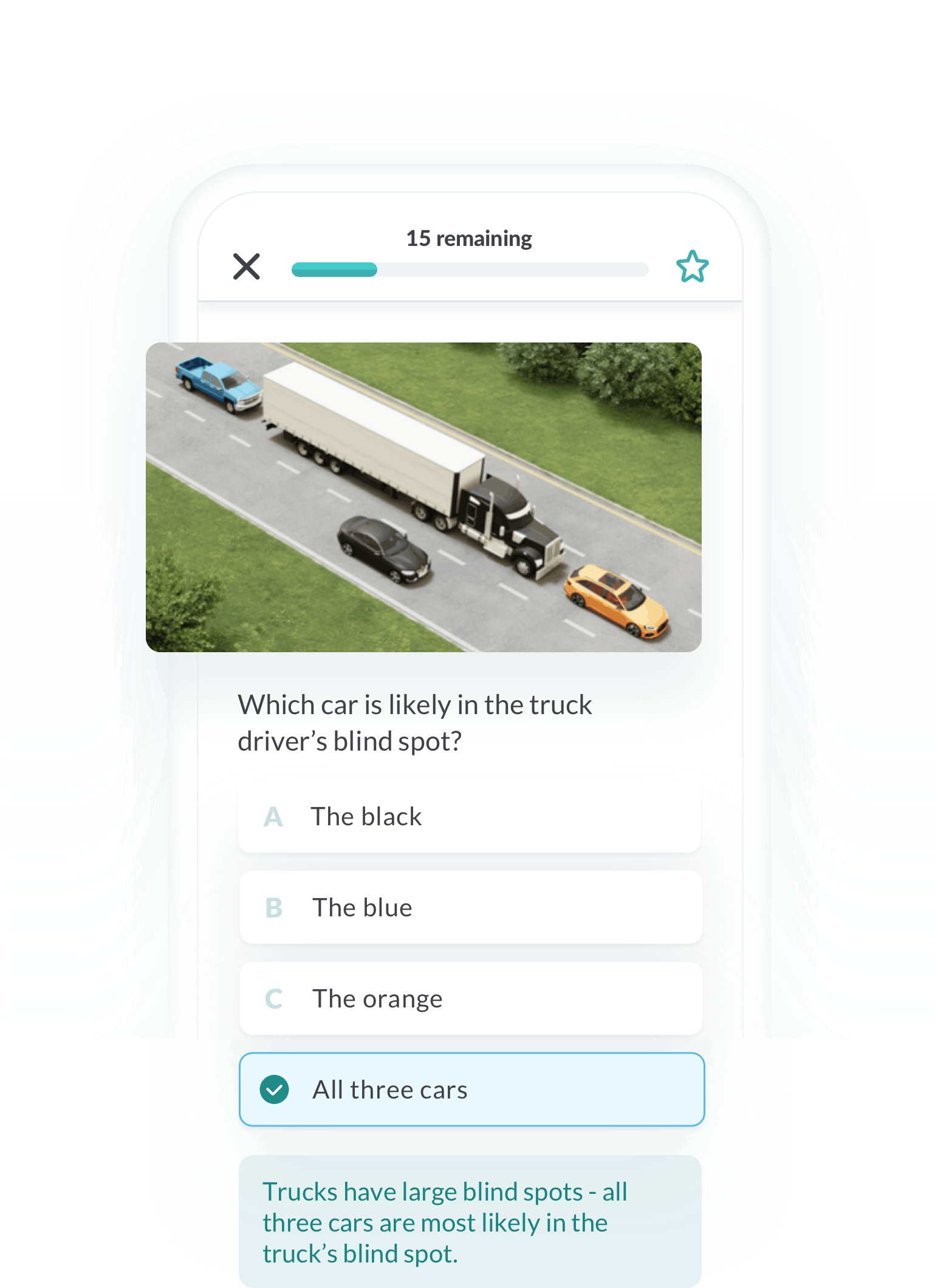 The Georgia permit test is easy for some and hard for others. It all comes down to how effectively you are studying. Many who have tried to get through the Georgia driver’s manual will know how hard it is to transfer that knowledge to the actual test. Nationally, around 50% of people fail to get a passing score their first time taking their learner’s permit test due to unpreparedness. The best way to study for your permit test is with Zutobi’s popular prep course.