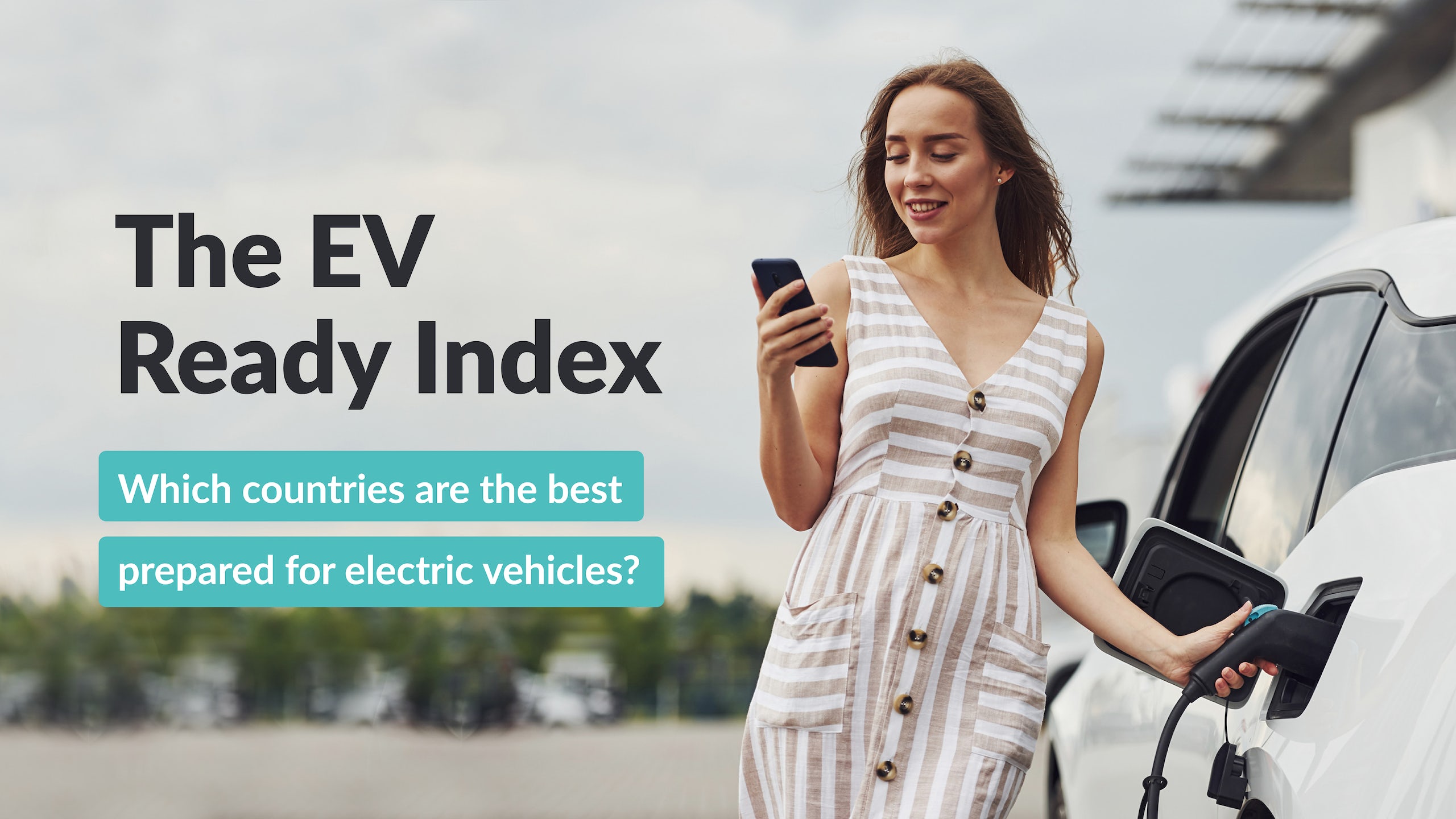 Which countries are the best prepared for electric vehicles?

With the looming threat of climate change, many people, companies, and nations are looking to reduce their use of fossil fuels and produce a lower carbon footprint. One way they are attempting to implement this is by making road travel better for the environment, by way of switching to electric vehicles (EVs) rather than traditional cars powered by petrol or diesel-powered internal combustion engines.

Many countries have set lofty electric vehicle targets, for example in the United Kingdom the government is committed to only selling new electric vehicles from 2030. Meanwhile, Joe Biden has announced that he would like half of new American cars to be electrically powered by the same date.

But which countries are best prepared for electric vehicle adoption? By taking into account the data for numerous different factors the experts here at Zutobi have been able to establish the best countries in Europe for EV use. On top of this, we have analyzed the EV readiness of the United States, Australia, and cities in the UK too. 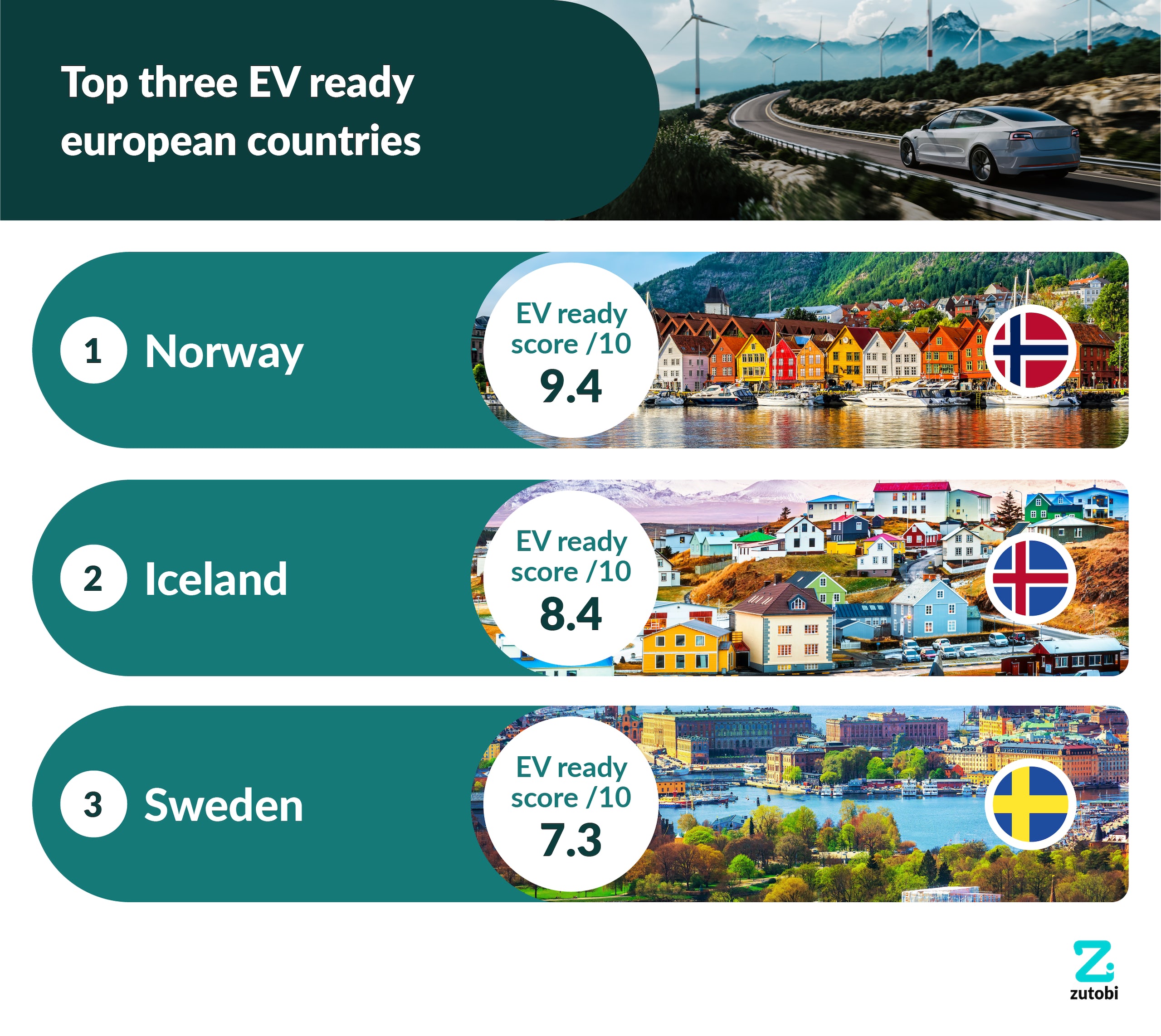 Keeping its 2021 title as the country most ready for EV adoption is Norway, which achieved a score of 9.4. Norwegian strategists have covered the landscape with 18,656 public charging stations, a marginal decrease of -0.3% since last year, and in such a small country it means that there are, on average, 35.67 charging stations per km of road, a drop of 0.3% since 2021, as 63 charging stations no longer operate in the country.

Iceland is the second most EV ready country in Europe rising from fourth place in 2021, although its overall score was a little behind that achieved by Norway. Iceland now ranks fifth for its proportion of electric vehicles, down from second in 2021. It also holds third place for the number of charging stations per kilometer of road, rising by 134.2% since 2021 showing that there is widespread public interest in EV adoption.

Next is Sweden with a score of 7.3/10, this makes Sweden the third most EV ready nation in Europe, rising from seventh place in 2021. The number of charging stations encapsulates the Swedish determination to become EV ready, as there are 25,197 in place across the nation, which is equal to 3.91 per km of road. Although, this has dropped by a whopping 20% since 2021 due to the massive increase in the length of its highways which have trebled in a year. 6.8% of all vehicles registered in the country are electric, compared to only 1.8% last year, a rise of 5.6%. 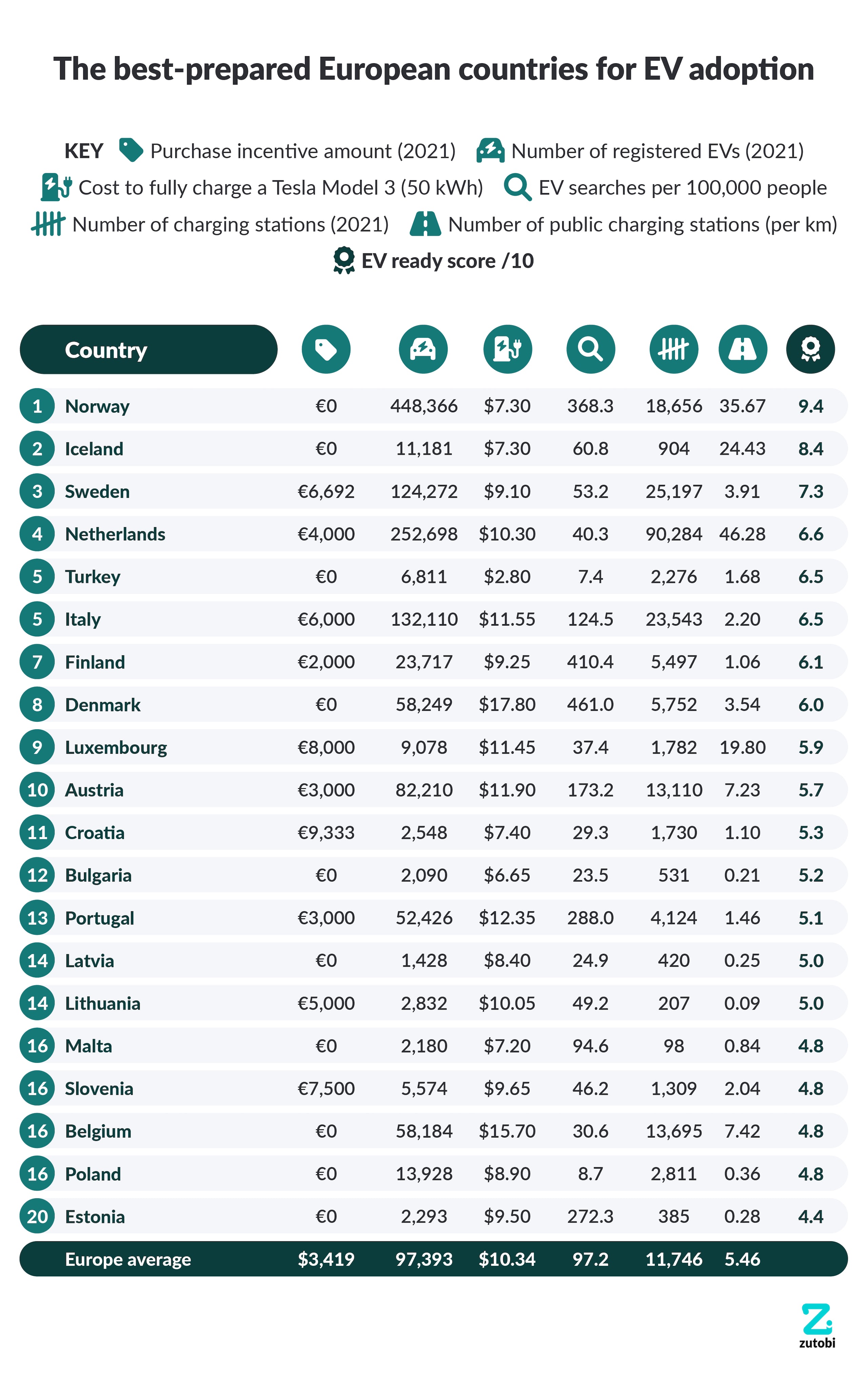 The Best-Prepared US States for EV Adoption

While we have established the European nations most ready for electric vehicles, we now turn our attention to the other side of the Atlantic and see how the gas-guzzling nation of old is adapting to the future. The American attitude towards car making has often been the bigger the better, especially in the ’50s and ‘60s when the Detroit giants produced copious cars with huge engines and luxurious trimmings.

But in recent years US car-making innovation has turned to electric cars, with Elon Musk’s Tesla leading the way from their Texan base. But are the US citizens ready to set aside their muscle cars and big pickup trucks, and ready to adopt electric vehicles?

In August of last year, Joe Biden made a big statement regarding the future of American motoring, as the president issued an executive order pledging that 50% of new American vehicles will be EVs by 2030. However, some environmental groups did not think this was good enough as it is not legally binding, and therefore (they believe) the automotive industry will ignore the target. Although EV sales have risen by an average of 17% in the US every year, this is far lower than the 60% in Europe and the 36% in China, and they are also lagging in terms of public charging stations. 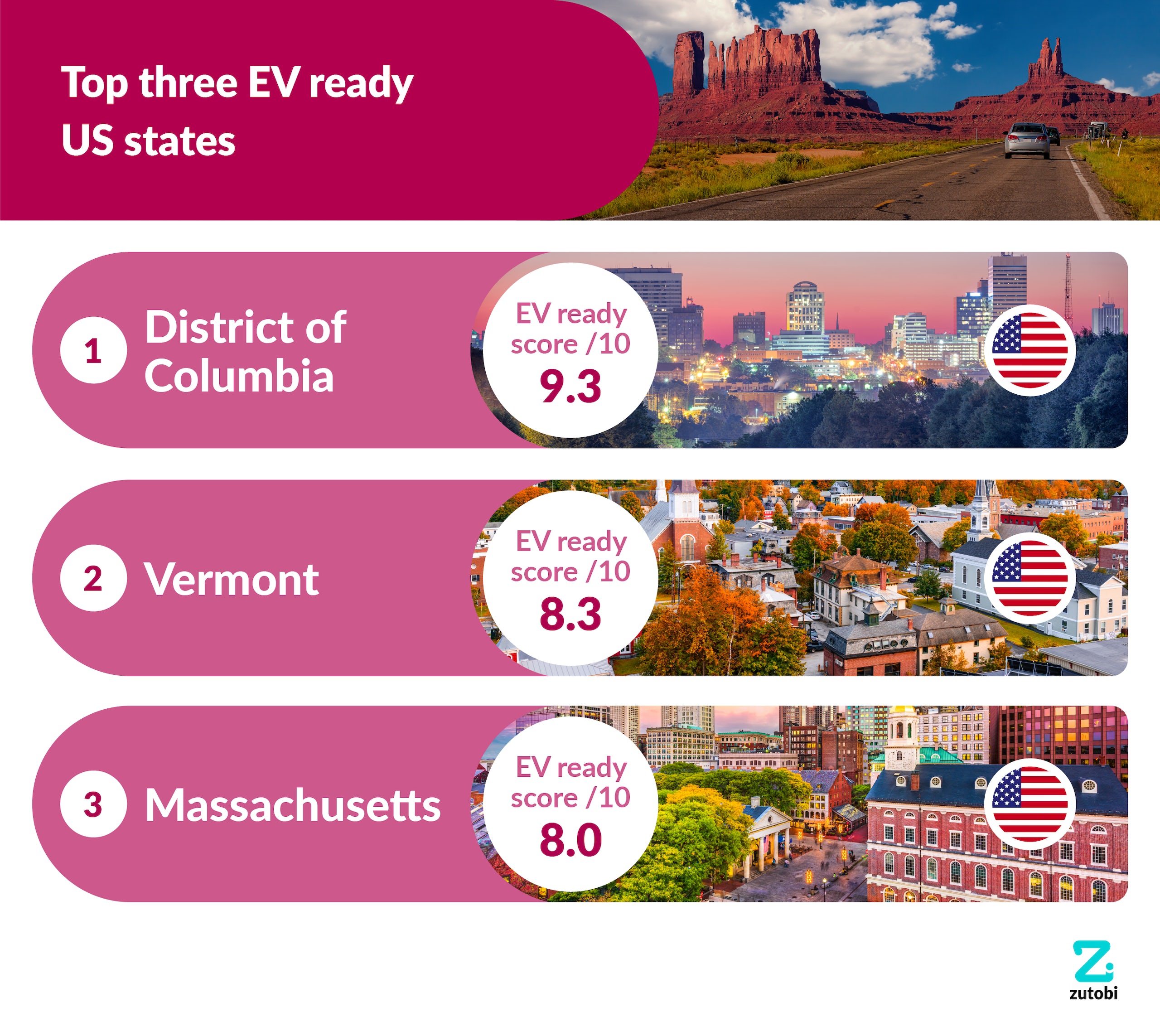 The factors that we used to determine the most EV ready US states are the number of registered EVs and the percentage of all registered vehicles that are electric. As well as this the number of public chargers, how many EVs, and the average number of miles there are per charging point. By combining these we were able to calculate a score out of ten for all fifty states, plus the District of Columbia.

Although it is not technically a state, the US capital District of Columbia is the most EV ready state. This is largely to do with the fact that there is a public EV charger every 1.84 miles on average. This is a whopping 20.8% reduction in distance from an EV charger every 2.33 miles in 2021 and far better than the national average of one charger every 101 miles. 0.66% of all vehicles registered in the district are EVs, and this is the fourth-highest in the country for this factor, although it has dropped by 0.02% since 2021.

Vermont is the second most EV ready state in America. Vermont only has 2.56 EVs per charging point, a marginal rise of 0.01% since last year which shows that its infrastructure is slowly adapting to cope with EVs. Furthermore, there is a charging point every 16.37 miles on average, much lower than the US average of 101 miles and 4.5% shorter than last year. 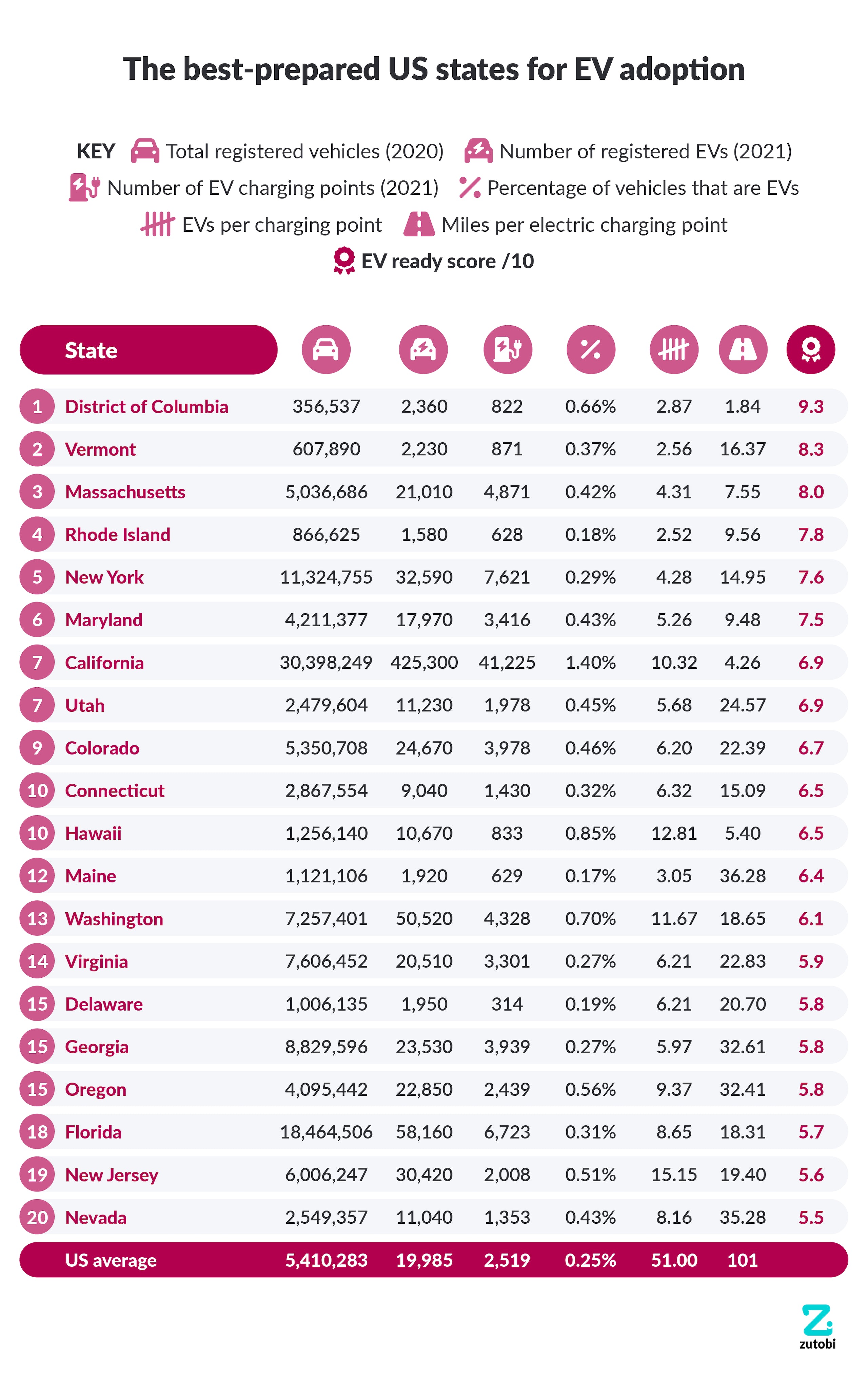 Electric vehicles are also increasing in popularity Down Under, as Australia is increasing its EV sales year on year. According to the Guardian, electric vehicle sales tripled in 2019. In total there were 6,718 sold in 2019 and this takes the Australian total of EVs registered to just under 15,000 which is over 30,000 less than the average in Europe, so Australia is lagging behind.

Some Australian territories are doing better than others in terms of EV readiness and by combining multiple factors we have given each state a score out of ten. 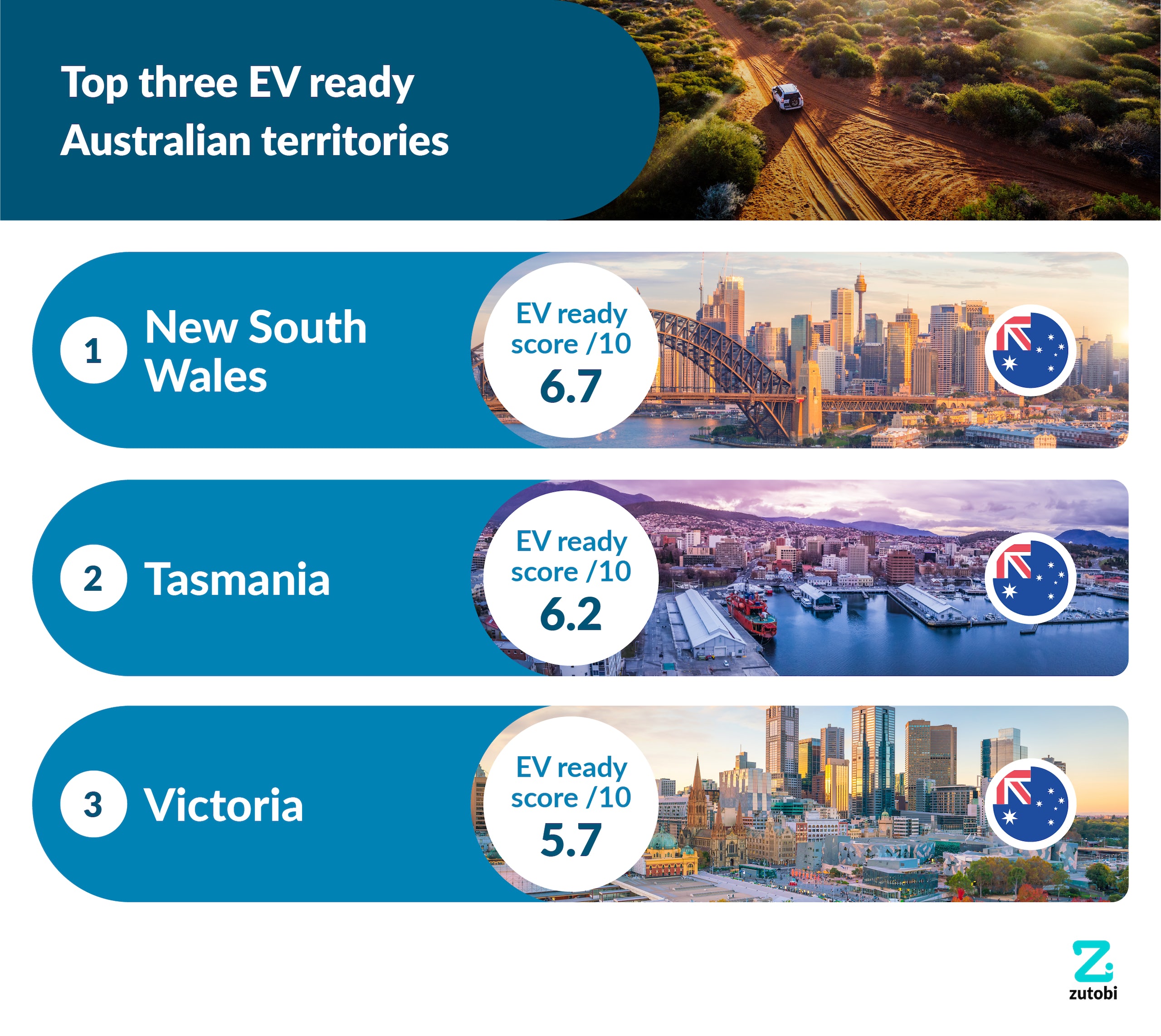 Keeping its crown, Australia’s biggest territory by population is the most EV ready area of the country. 8 million New South Wales residents purchased 832 EVs in 2019 which was the most in the country. They also increased the number of public charging stations in the territory by 234.

Down from second place from last year, The second smallest territory and Tasmania’s neighbor across the Bass Strait takes third. Victoria ranks highly across the board, with over 4,000 EVs registered and more than 700 charging stations in the territory, up from over 500 last year. 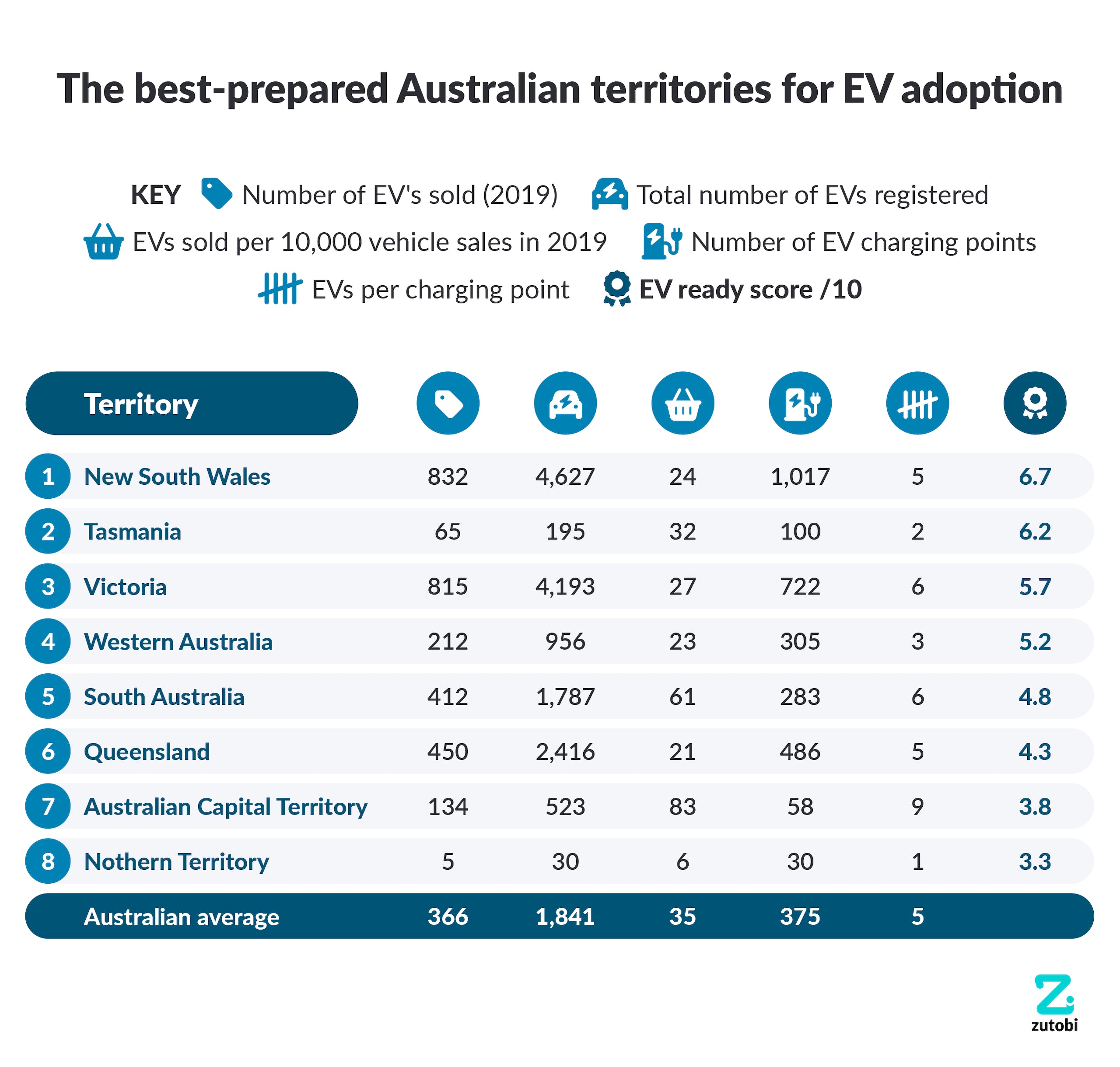 Electric vehicles are also seeing a rise in popularity in the UK. Thanks to increasing penalties on petrol and diesel cars and environmental concerns, nearly half of new buyers are now looking for fully battery-powered vehicles, according to the Telegraph. Sales of battery-powered vehicles have also increased 18% year on year with 92,500 new electric vehicles registered in 2022, accounting for 14% of total sales.

However, some UK areas are more prepared for the green vehicle revolution than others so by combining multiple factors and giving each a score out of ten we can find out which city is the most EV ready. 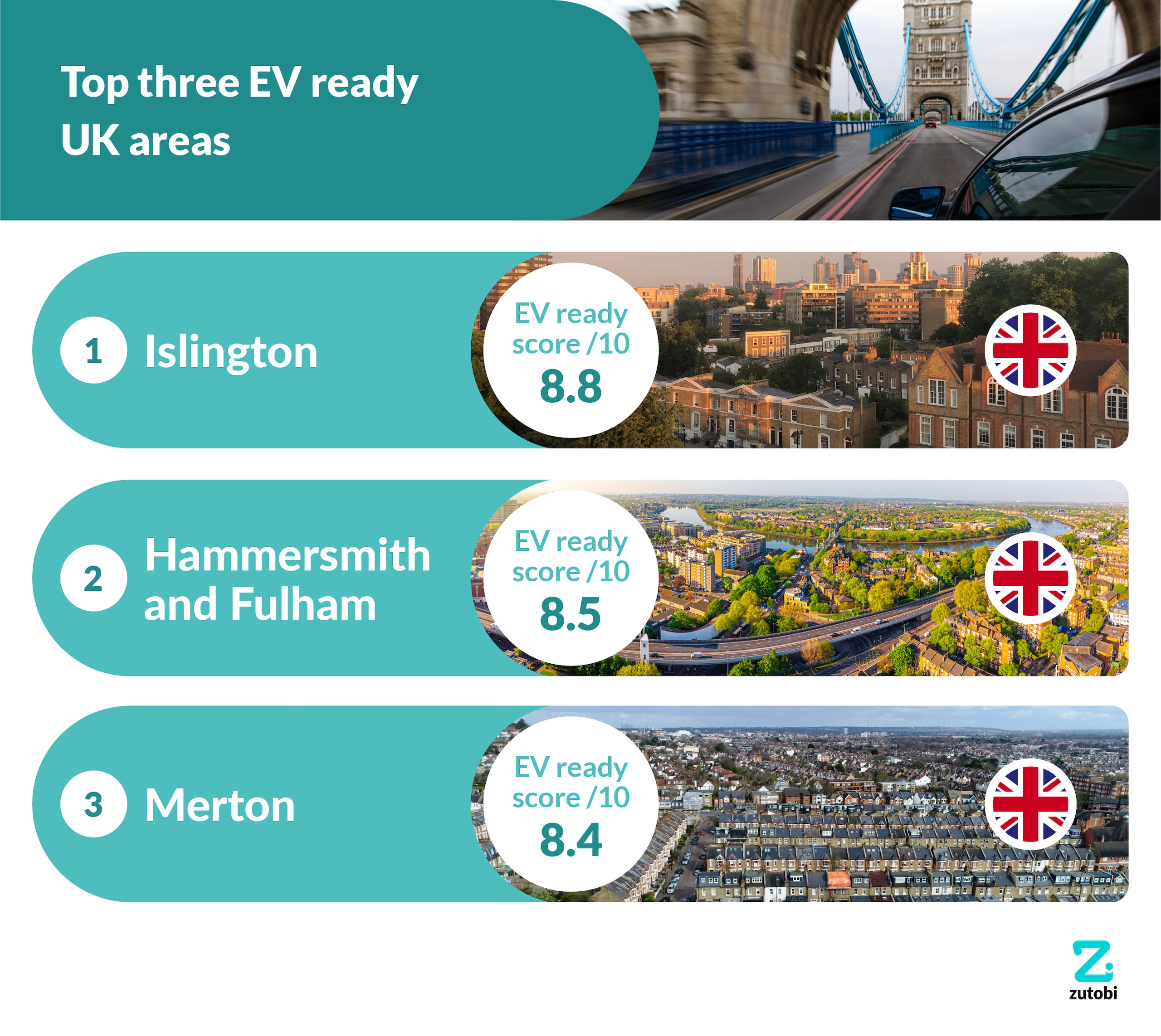 The second London borough on the list is Hammersmith and Fulham. The borough ranks high thanks to its density of EV chargers with drivers only having to travel 0.9 miles on average to find the nearest publicly available charger.

Taking third place is another London borough and home to Wimbledon, Merton. The borough ranks highly as EV drivers in Merton only have to travel 1.5 miles on average to find a charging point, more than 18 times shorter than the UK average of 28. 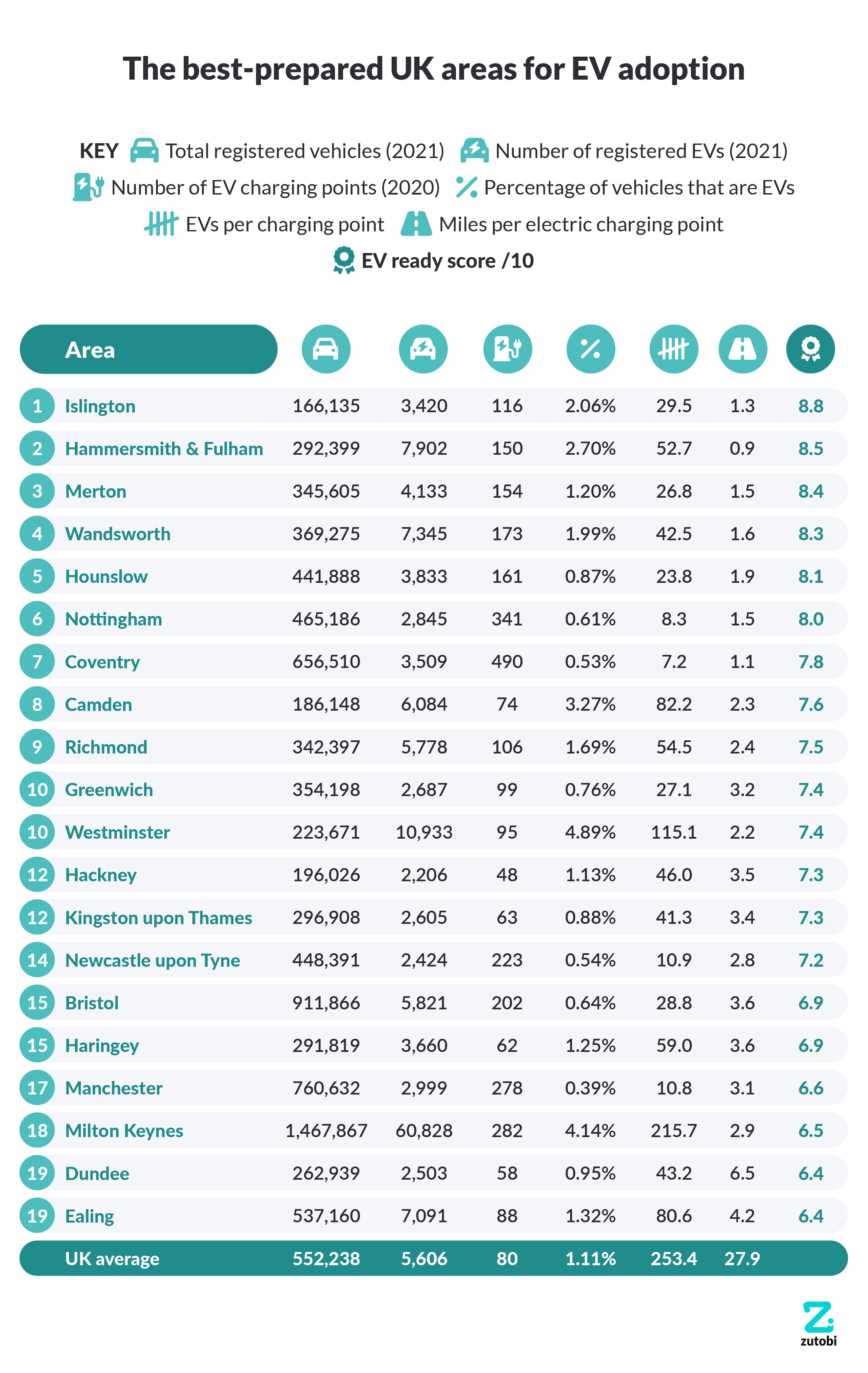 Now that we have explored the EV readiness of some of the biggest markets around the world, we can compare them to last year’s findings. So which countries have upped their game when it comes to embracing the electric revolution since 2021? 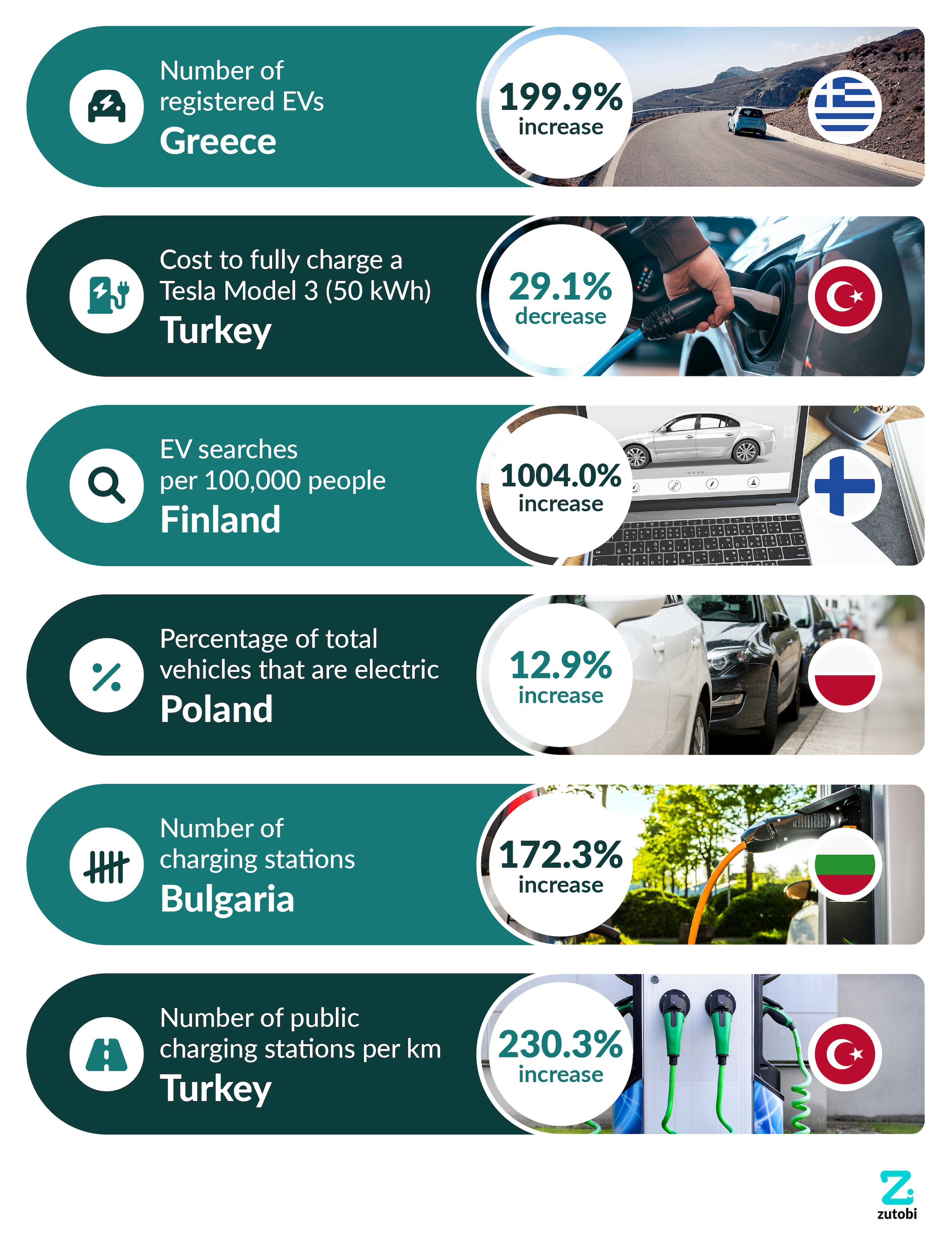 Greece has the biggest increase in the number of registered EVs, with its electric fleet growing by over 2,200 year-on-year. Recently, the Greek government has introduced generous incentives to replace older polluting taxis with electric vehicles, which could explain this rapid rise.

Turkey has the biggest reduction in price to charge a Tesla Model 3, with electricity prices decreasing by just over 29% since last year. Residential electricity prices have dropped in Turkey over the last year as energy bills were lowered to combat the rising cost of living in the country.

The Nordic nation of Finland has had the biggest increase in interest in EVs per 100,000 people, with Google searches rising by a whopping 1004% between 2021 and 2022. Attitudes to EVs have softened recently, with the majority of young people saying they would buy an electric car as their next vehicle.

Percentage of Total Vehicles That are Electric – Poland 12.9% increase

Poland ranks first with the highest increase in electric vehicles as a proportion of its fleet, rising by nearly 13% since last year. Poland is one of the fastest-growing European markets for EVs, so it’s no surprise it takes the top spot.

Bulgaria in the southeast of Europe has the biggest increase in charging stations on our list, more than doubling the number since last year. Bulgaria’s electricity grid operator recently announced its plan to install 10,000 charging points across the country over the next 5 years, which could explain this huge increase.

The most important aspect of making sure a country can support its growing fleet of EVs is the density of its charging network. Nobody knows this more than Turkey as it has the highest increase in charging stations per KM, rising by more than double since last year. 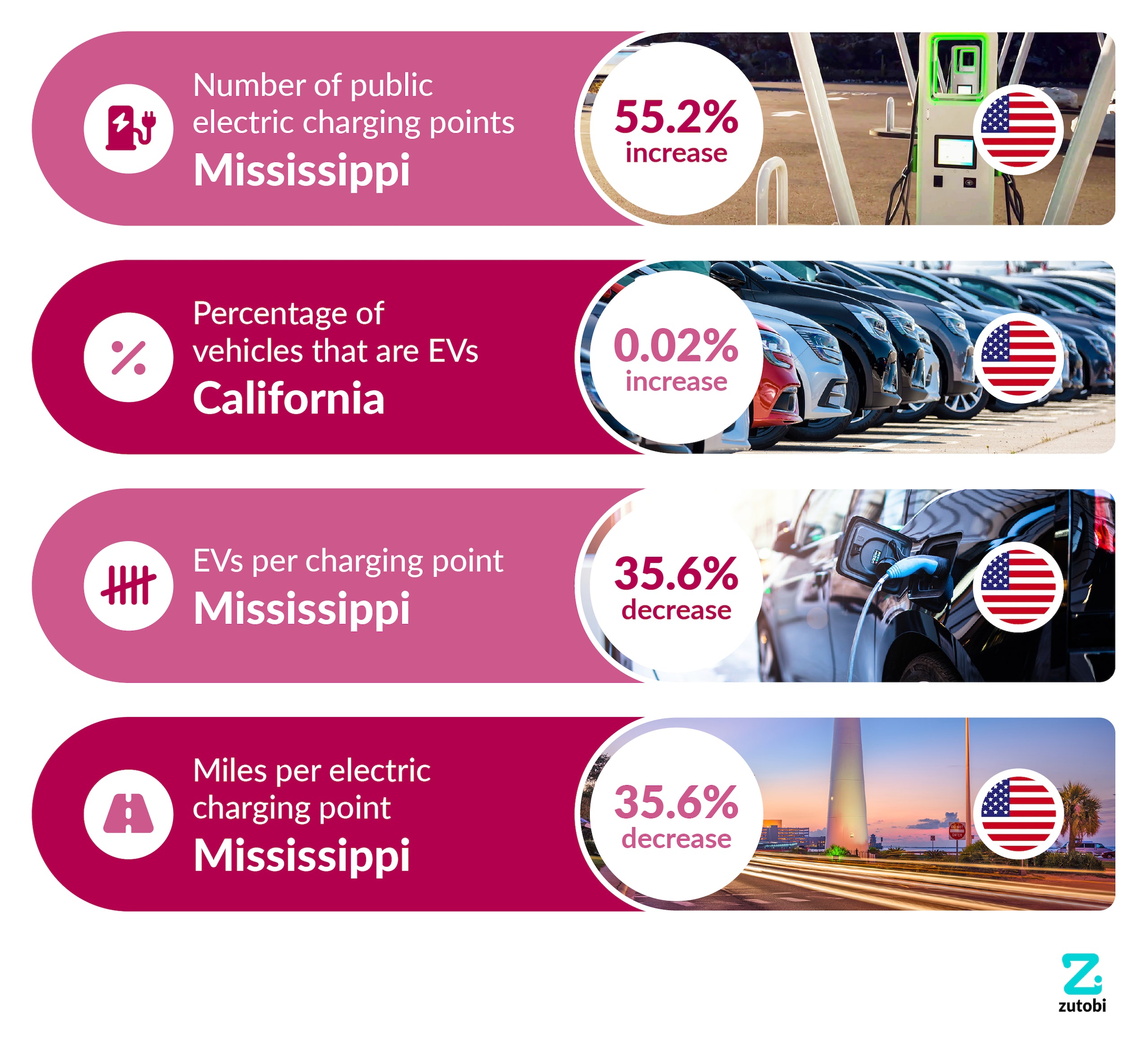 The Magnolia state takes the top spot with the biggest increase in charging points, rising by over half year-on-year. Mississippi has among the lowest number of charging points in The US, although it has risen by several places for the factor since last year.

Percentage of Vehicles that are EVs – California 0.02% increase

It comes as no surprise that the state with the highest total and proportional number of EVs also has the biggest increase year-on-year. California has seen a modest increase of 0.02% in its proportion of EVs since 2021.

Mississippi has experienced the biggest decrease in EVs per charging point year-on-year, with the rate dropping by 35.6%, thanks to its quickly expanding EV charging network, rising year-on-year from 279 charging stations to 433. This expansion shows no signs of stopping as the state has been allocated $50 million by the federal government to supercharge its EV infrastructure.

Mississippi takes the top spot for this factor, increasing the density of its EV charging network by a very respectable 35.6% year-on-year, decreasing the average distance between EV chargers by roughly 100 miles. 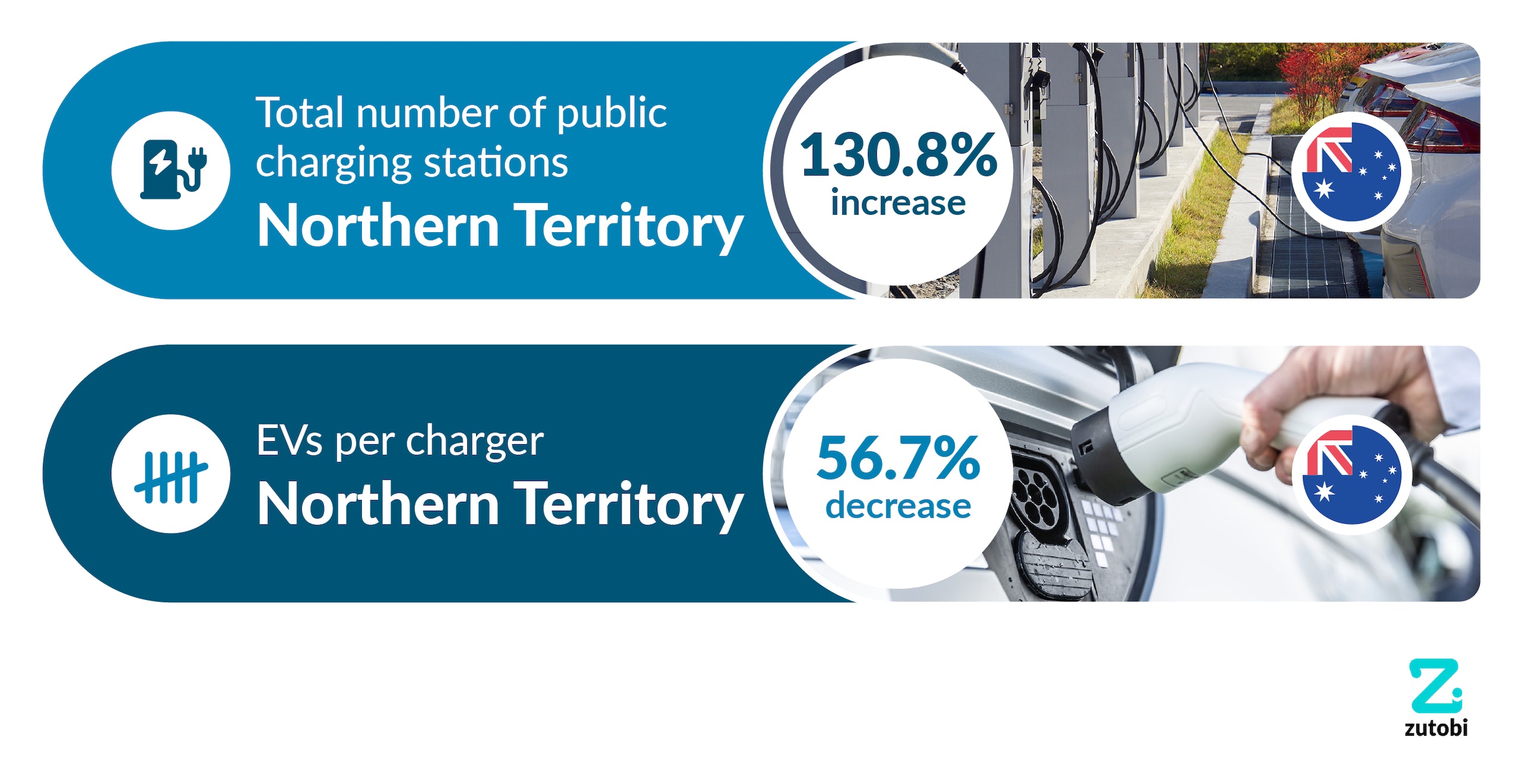 Australia’s Northern Territory has seen the biggest increase in charging stations, more than doubling the 13 it possessed in 2021. This is thanks to the recent proactive approach taken by legislators in the territory to subsidize the installation of EV chargers.

The Northern Territory has also seen the biggest decrease in EVs per charger, with the rate dropping by 56.7% since last year. This is a result of the number of charging stations increasing in the territory, whilst the number of EVs remained unchanged,