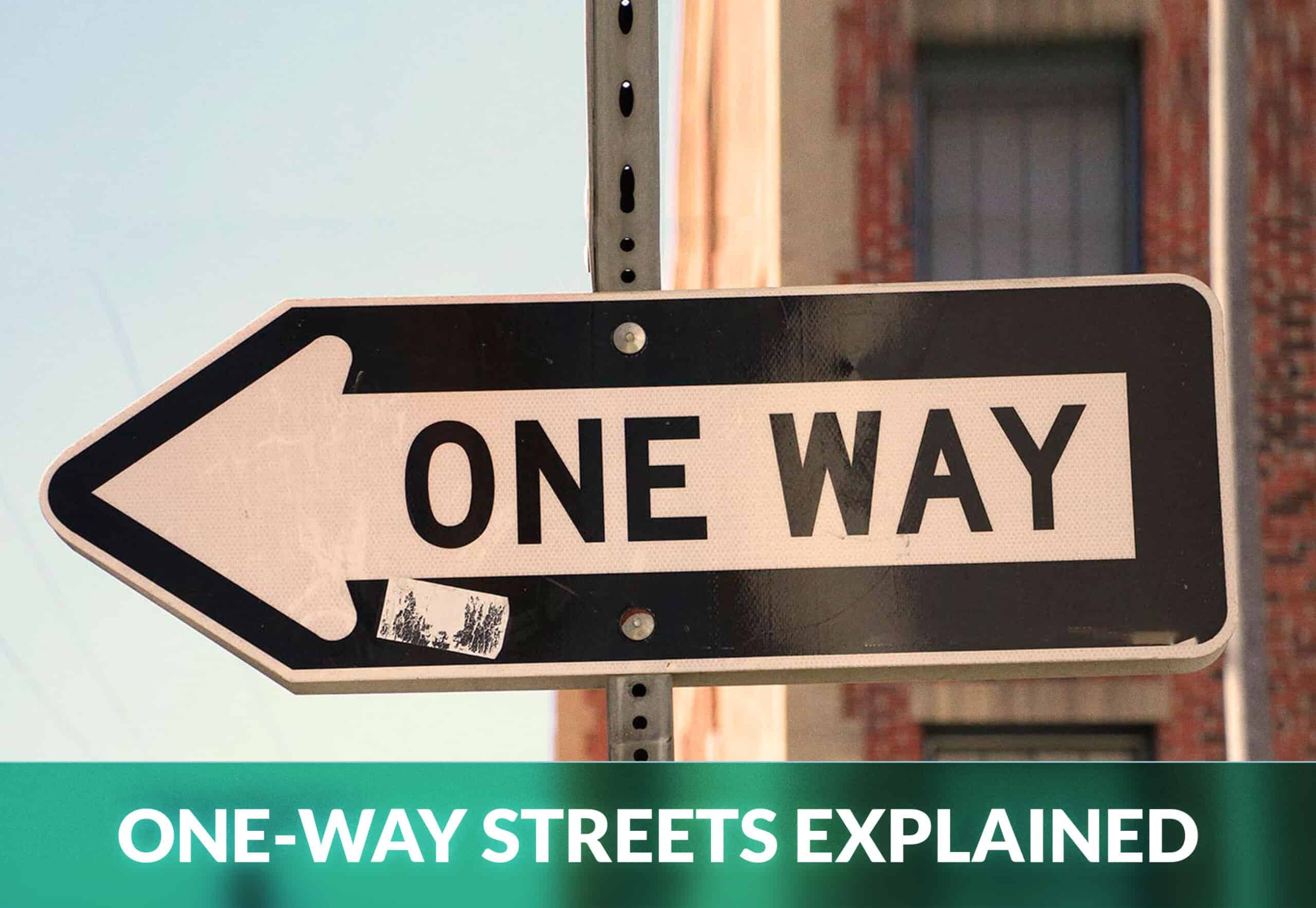 One-Way Streets: What They Are, Rules, and Signs

If you’re studying for the knowledge exam, understanding how to identify and navigate a one-way road is vital to passing the test. Maybe you’re a veteran driver who’s looking to brush up on some core driving subjects – one-way roads can be very confusing and often cause accidents at higher rates than two-way roads. However, when used correctly they can aid in directing traffic flow through crowded areas.

There’s no need to worry. We have everything you need to know about one-way roads, how they work, and how to recognize these signs when driving. You’ll need to know these bits of information to safely operate a motor vehicle in all fifty states, as well as several countries abroad.

A one-way road sign is a regulatory traffic sign that indicates the presence of a one-way road. These signs direct traffic flow in a single direction, warning drivers not to make any left turns or U-turns into the one-way at an intersection. Drivers traveling in the wrong direction of a one-way sign run the risk of causing a head-on collision with another driver.

One-way road signs are usually small in height and rectangular in size, with a black background and a white arrow indicating which way traffic should flow. They also come in a larger rectangular version with a white background and black arrow. Both signs are labeled ‘ONE WAY’ in capitalized black letters. 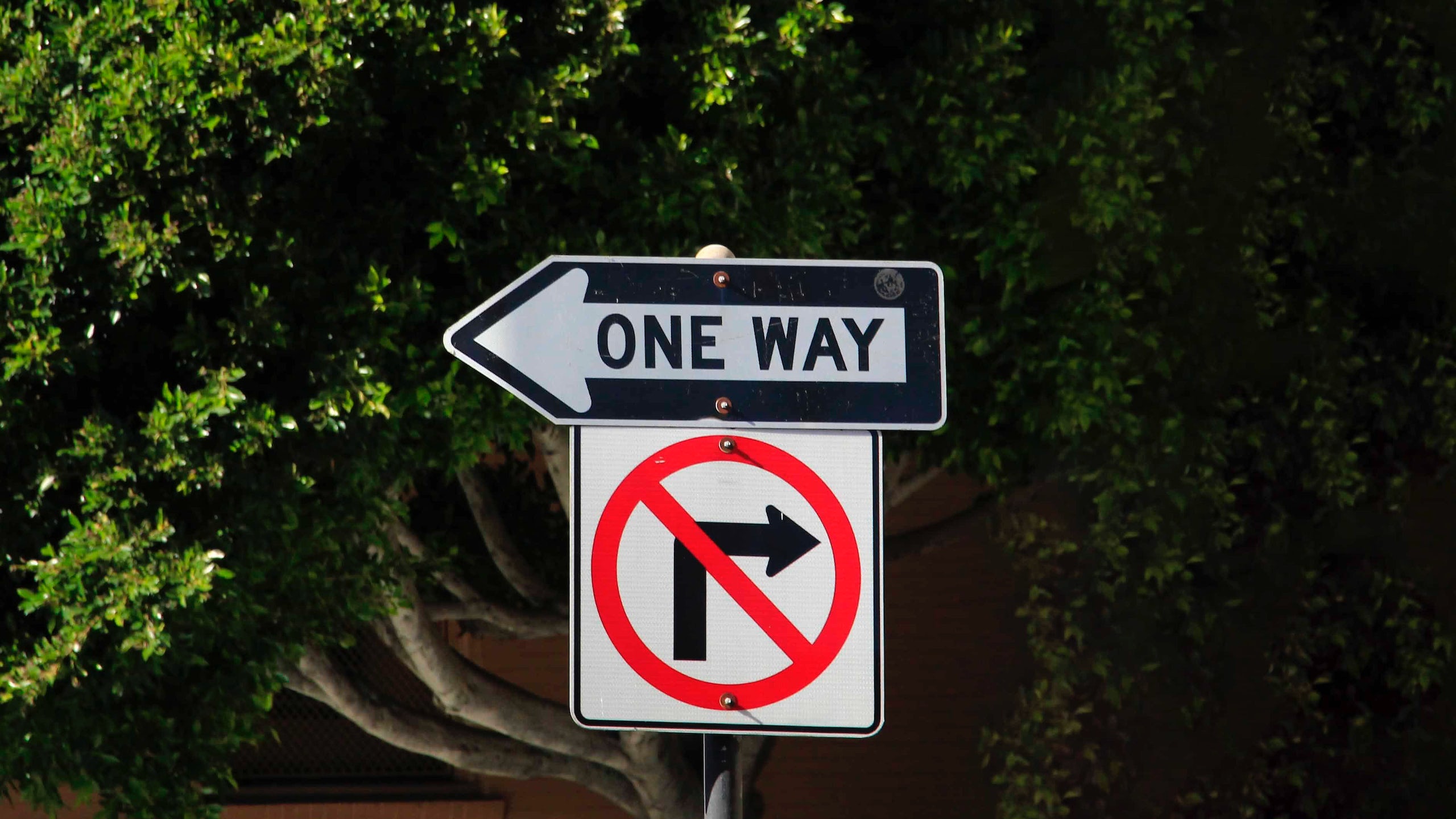 Why are One-Way Roads Important?

One-way roads keep traffic flowing in one direction and offer improved signal timing. Often seen in heavily congested, downtown areas, these streets are known to reduce pedestrian accidents, but can encourage higher speeds that can sometimes lead to vehicular crashes. 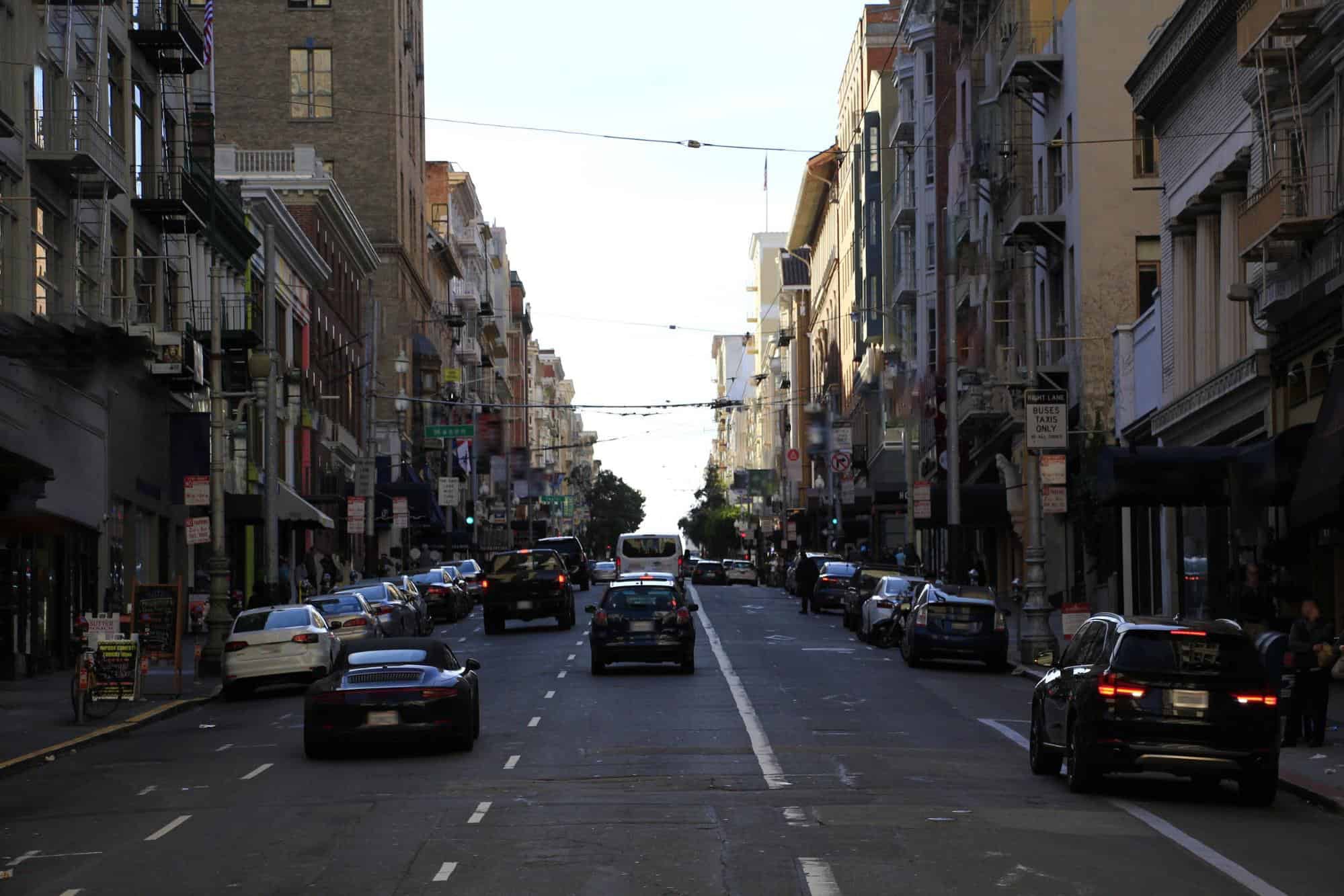 As opposed to two-way roads, one-way roads are a great way for urban planners to reduce congestion in popular tourist areas. These roads also allow for better parking and foot traffic capacity in high-volume business districts within the city.

How Can You Identify a One-Way Road?

If you miss the sign for some reason, there are still ways you can determine if you’re on or turning into one of these roads, such as road markings. One-way streets always have white lane markings in the US. Additionally, if cars on both sides are parked facing one direction, you’re definitely on a one-way road.

Another way you can identify a one-way road is by a “Do Not Enter” sign that may be posted on the opposite end of the street.

For example, let’s say you’re at (what you assume to be) a four-way intersection. As you look forward, you may notice you’re on a street with traffic flowing in two directions, separated by a thick, double yellow line. When you look to your left, you may notice a circular or rectangular sign with the words “Do Not Enter” on the face of it. This is a street indicator that traffic flows in one direction – and it is the opposite direction of the way you’re looking at. To the right, you’ll likely see a standard one-way road sign, giving you confirmation that the street is one-way only.

How to Correctly Turn From a One-Way Street

The rules can vary slightly from state to state, but these are the general rules when preparing for and turning from a one-way street. 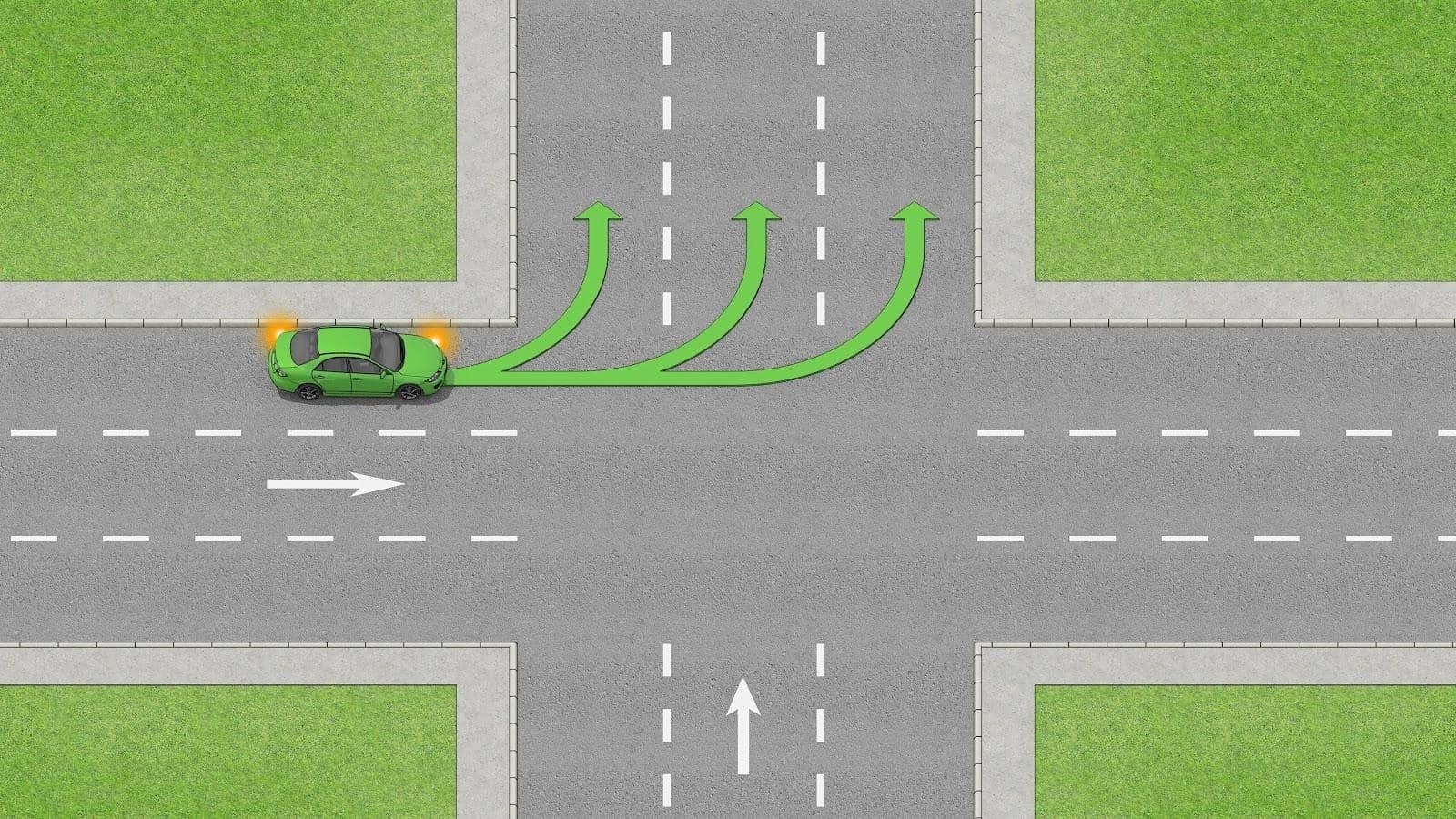 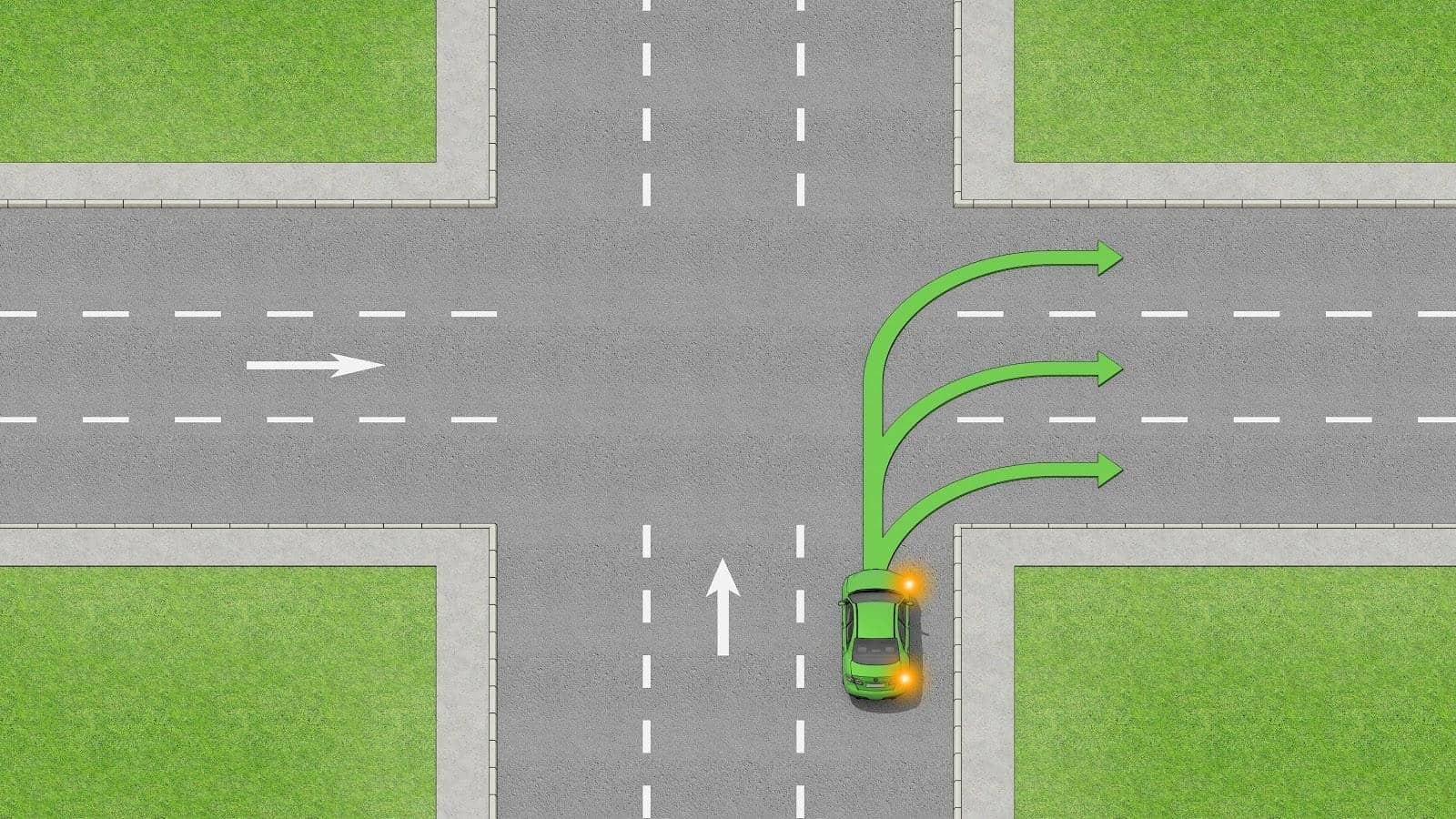 One-way roads are important for safety, traffic flow, and parking capacity in most city areas. It is also known to drastically decrease the number of pedestrian accidents when converted from its two-way counterpart. This makes it a popular option when planning vehicular flow for city parades, festivals, and other special events as well.

Understanding road signs is vital for your safety on the road, but your general road knowledge as well. After all, you’ll be tested on your knowledge of the one-way sign on the written test, as well as a variety of other traffic signs, rules, and regulations.

Looking for a new way to study that doesn’t involve your state handbook? Try the internet’s best new way to study for your upcoming driving test. Zutobi offers students a gamified experience while helping them accumulate vital knowledge about the knowledge and driving exams. The best part is – it’s available in all 50 states!