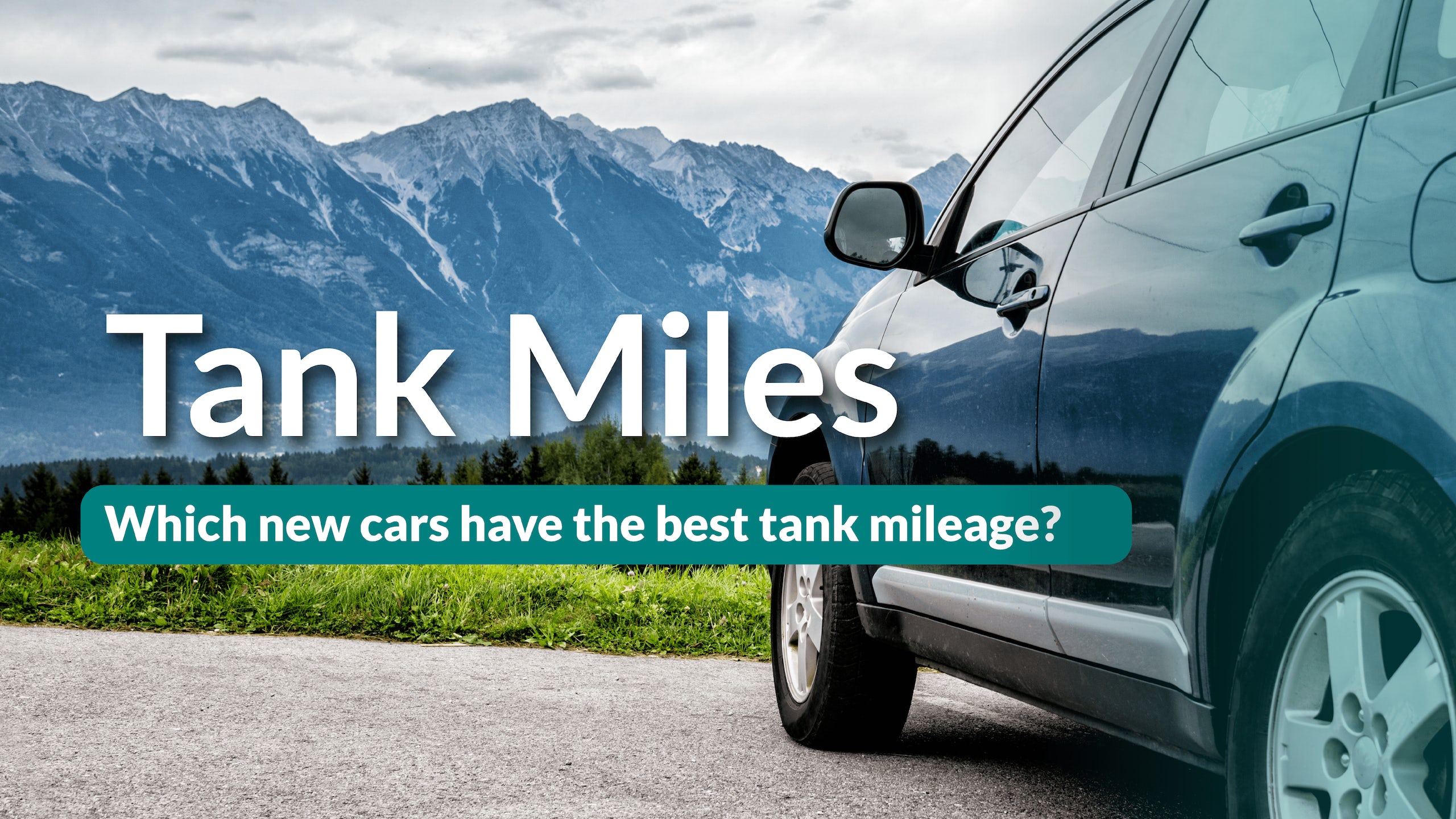 Which new cars have the best tank mileage?

As fuel prices are increasing rapidly across the world, choosing the car that gives you the best range for a single tank of fuel is one of the most important factors when you’re learning to drive, so you can practice without worrying too much about the cost.

But which of the most popular new cars around the world can drive the furthest, and how much will a full tank cost? We’ve also looked into new electric vehicles to see how they measure up to their traditional counterparts.

The cars with the greatest range 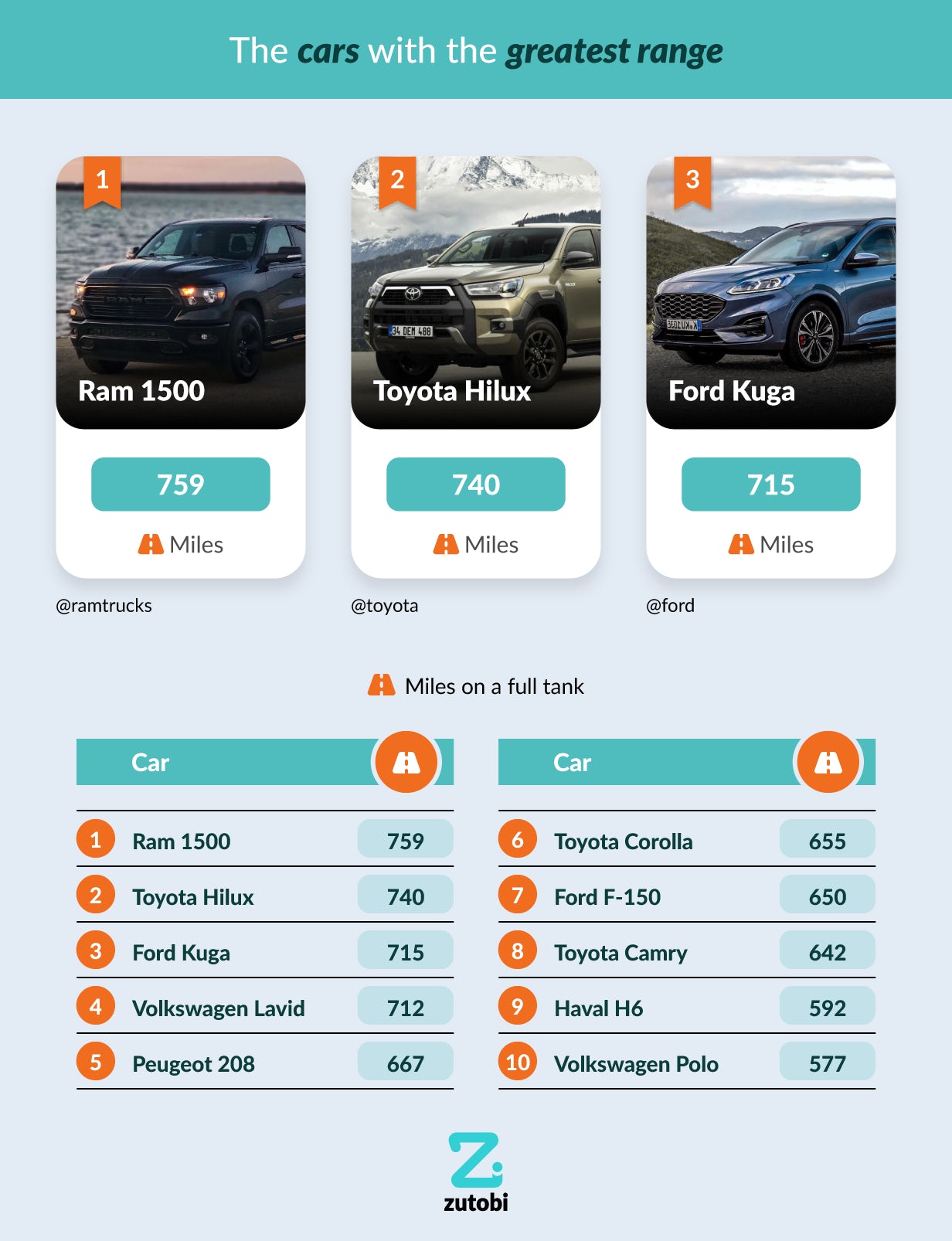 Taking the top spot as the car with the highest mileage on our list is the Ram 1500. This truck has a range of a whopping 759 miles, thanks to its enormous 33-gallon fuel tank. However, it’s also one of the least fuel-efficient cars, with only 22 miles to the gallon.

Up next is the second pickup truck on the list, the Toyota Hilux. The Hilux is world-renowned for being one of the toughest and most reliable pickups on the market and has sold over 18 million since its debut in 1968. It also has one of the greatest ranges on our list, with a single tank lasting 740 miles.

In third place is the Ford Kuga. The third generation of this spacious family SUV has a relatively small fuel tank for its size at only 17.4 gallons, although it makes up for it with very high fuel efficiency, averaging 41 miles per gallon. This gives the Ford Kuga a range of 715 miles.

The electric cars with the greatest range 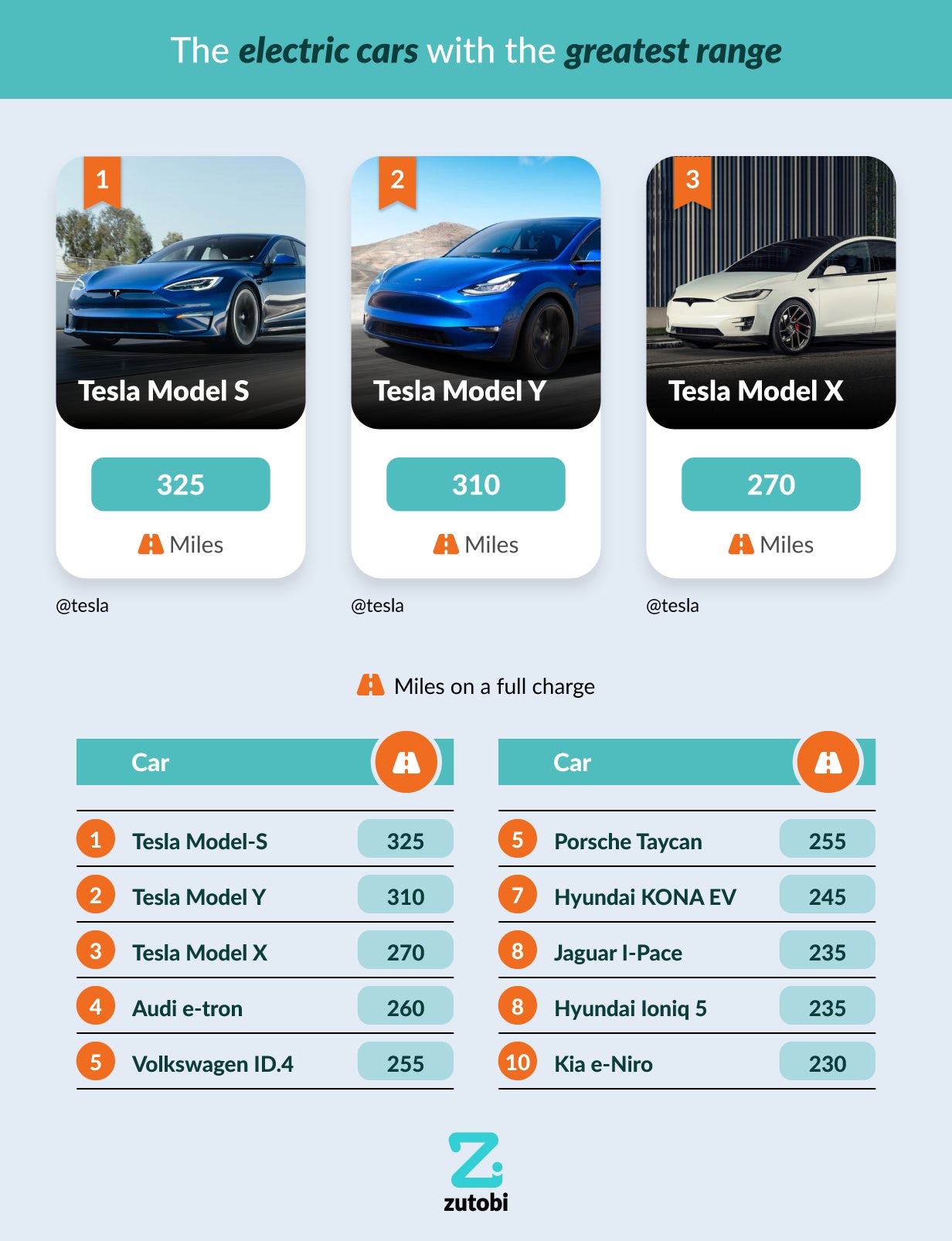 The latest version of Tesla’s first mass-market offering, the Tesla Model S has the greatest range of the electric cars on our list. The comfortable four-door five-seat saloon is able to travel 325 miles on a single charge, thanks to its 95 kWh usable battery capacity.

Tesla also takes second place. The Model Y is a spacious and more practical sibling of the Model 3 and is the brand’s first compact SUV. With a usable battery capacity of 82 kWh, it can travel 310 miles on a single charge, lagging behind other sportier Tesla models due to its 2-tonne weight.

Completing our top three is yet another Tesla. With its signature falcon-wing doors, four-wheel drive and seats enough for seven people, the Model X is one of Tesla’s most luxurious offerings. It also has one of the furthest ranges on the list, with its 95 kWh usable battery capacity capable of 270 miles on a single full charge. 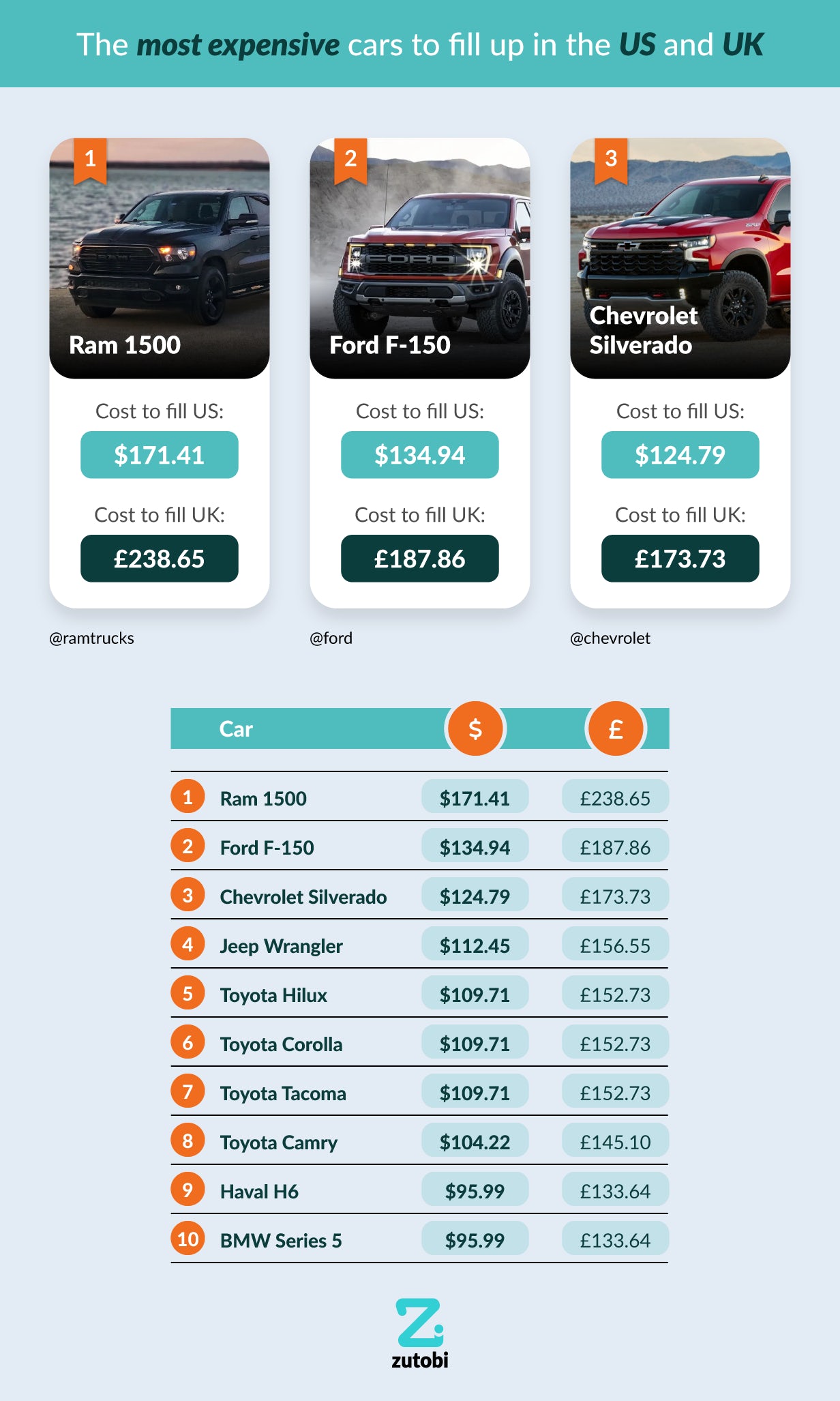 Up next is another gas-guzzling pickup, the Ford 150. First introduced in 1948, this truck is currently in its 14th generation and is one of the best-selling car models of all time. Taking second place thanks to its whopping 26-gallon tank, it costs $134.94 to fill up in The US and over £180 in the UK.

Rounding off our list of the top three is another pickup, the Chevrolet Silverado with its 24-gallon tank costing drivers in the US $124.79 and £173.73 in the UK for a full tank. The full-size pickup is one of the most popular trucks in its home market of the US, selling over 12 million since its introduction in 1999. 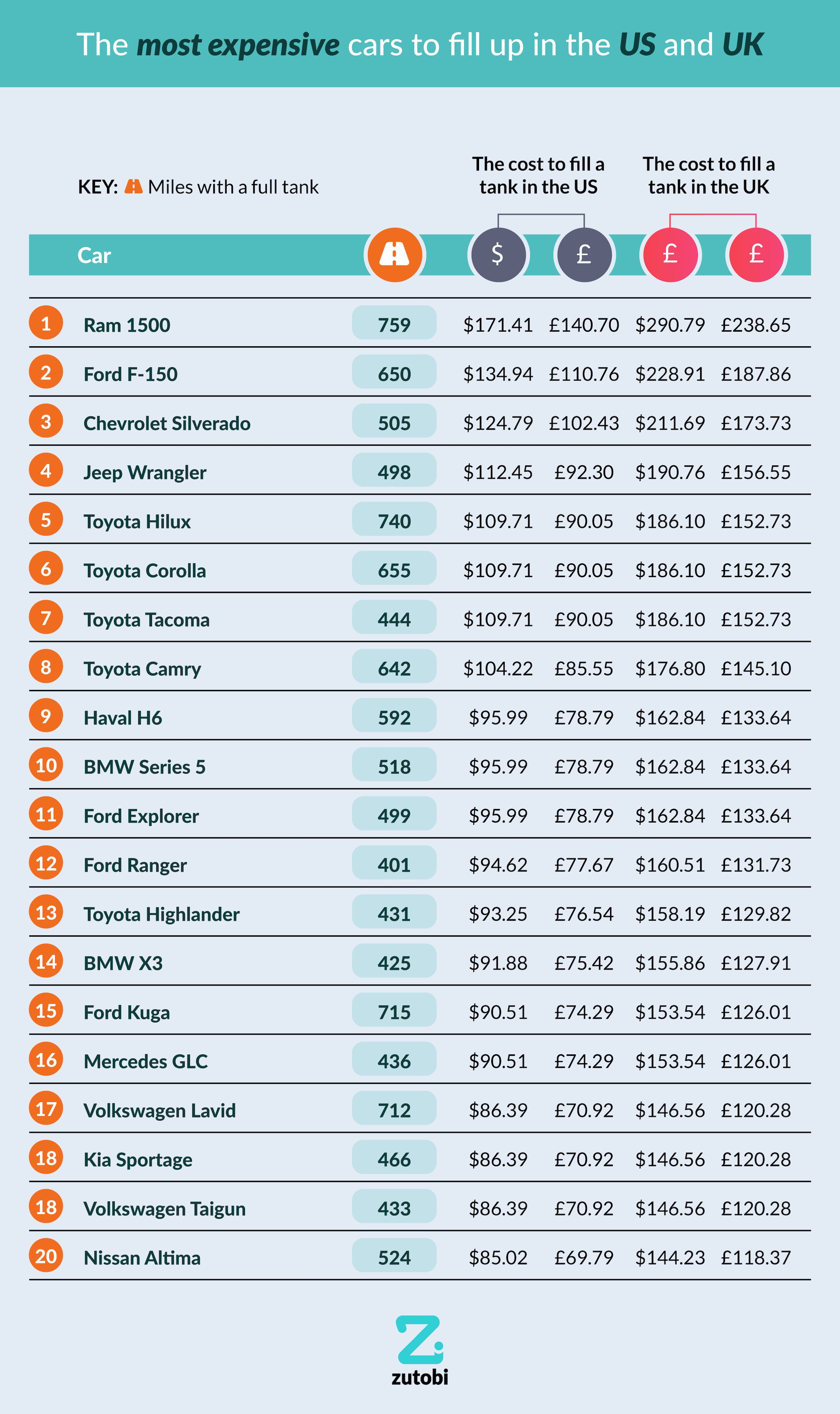 The most expensive cars to charge in the US and UK 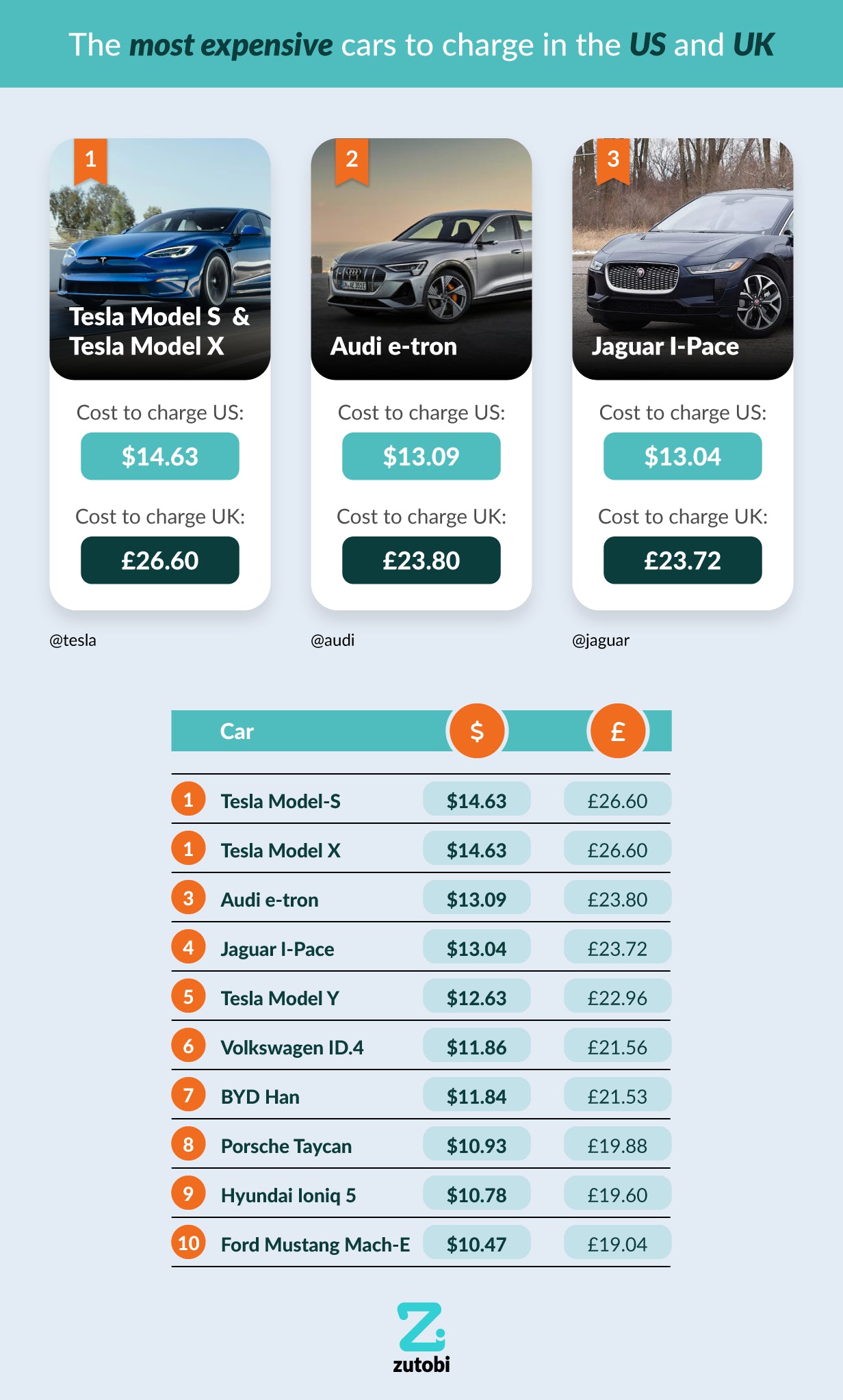 Two Tesla models share the top spot as the most expensive electric car to fully charge, as they share the same battery capacity. Both models cost $14.63 to fully charge in the US and £26.60 in the UK.

The Model S is Tesla’s flagship vehicle. First introduced in 2012 it has sold over 250,000 units and is one of the most popular high-performance electric cars on the market, thanks to its efficient battery and 3.1 second 0-60 time.

The Model X is Tesla’s mid-size luxury crossover, equipped with Tesla’s Autopilot driver assistance system and its unique falcon-wing doors. This SUV is one of the world’s best-selling plug-in electric cars.

Up next is the Audi e-tron, Audi’s first fully electric car and one of the first fully-electric SUVs. Debuted in 2019 after 10 years in development, the e-tron is a practical and spacious family car, although it has proven less popular than its competitors the Tesla Model X and the Jaguar I-Pace.

Taking third place is the third electric SUV on our list. The I-Pace is Jaguar’s version of a fully-electric compact luxury crossover and features some of the electric drive technology used by the Jaguar racing program. The SUV costs $13.04 to fully charge in the US and £23.72 in the UK. 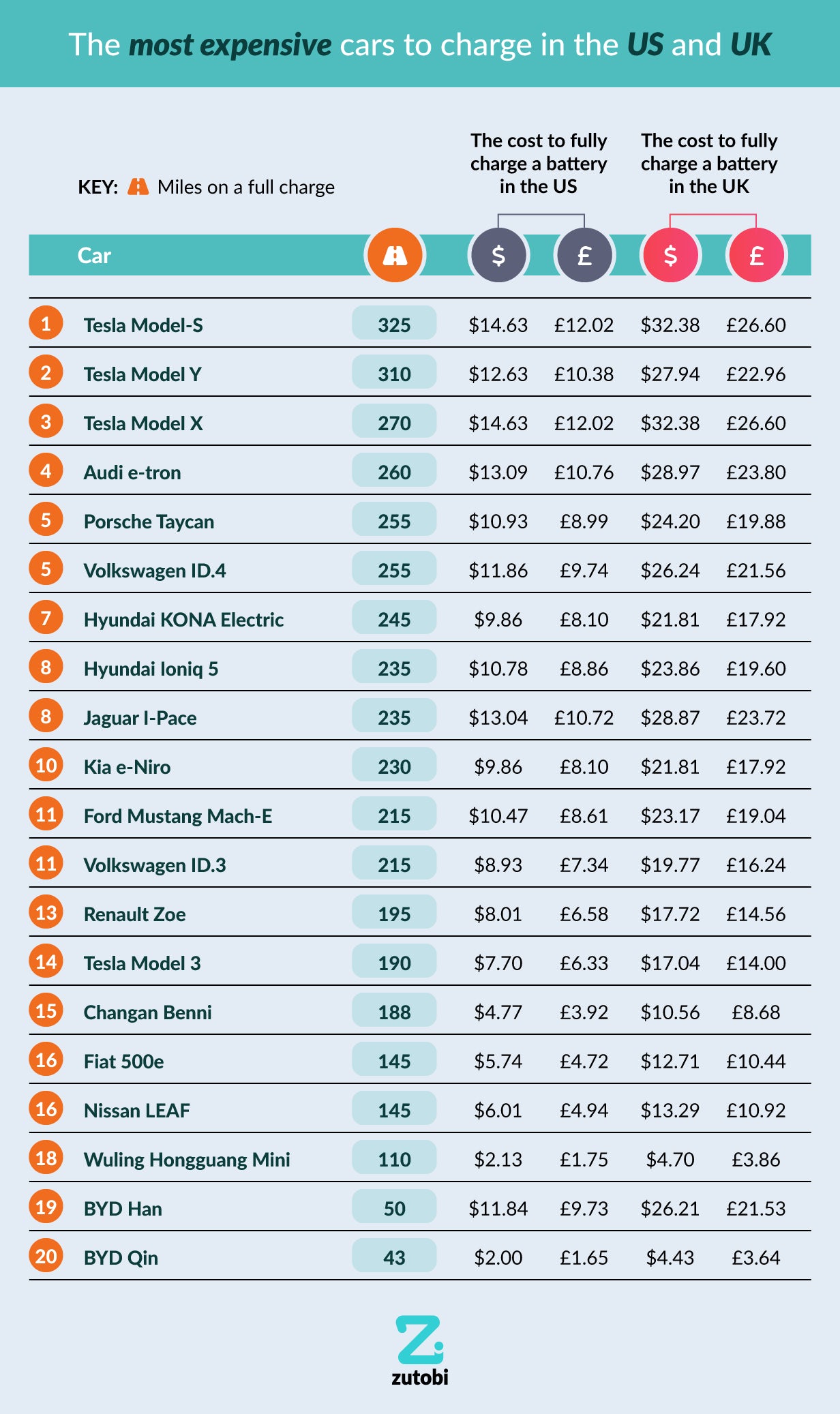 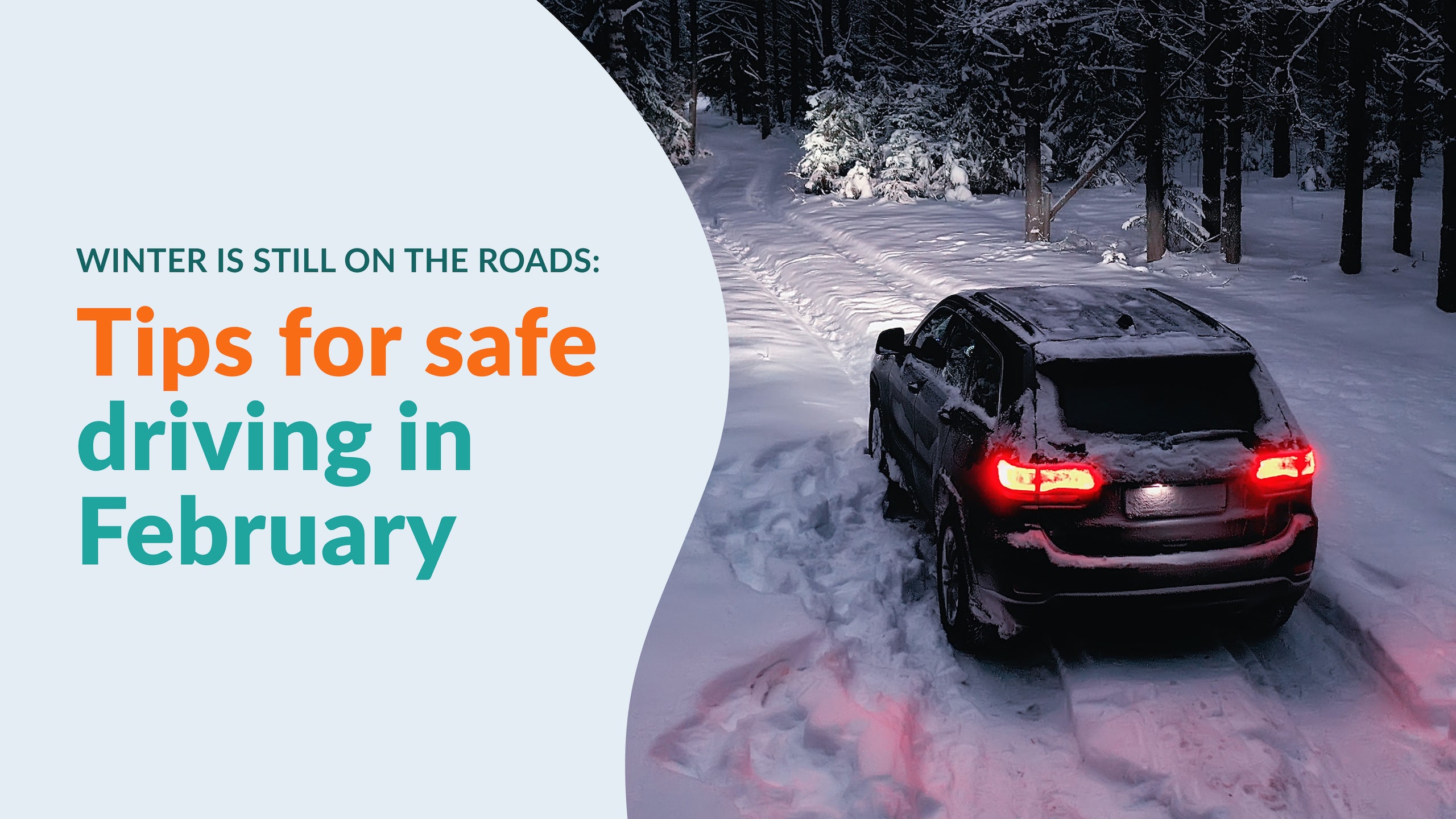