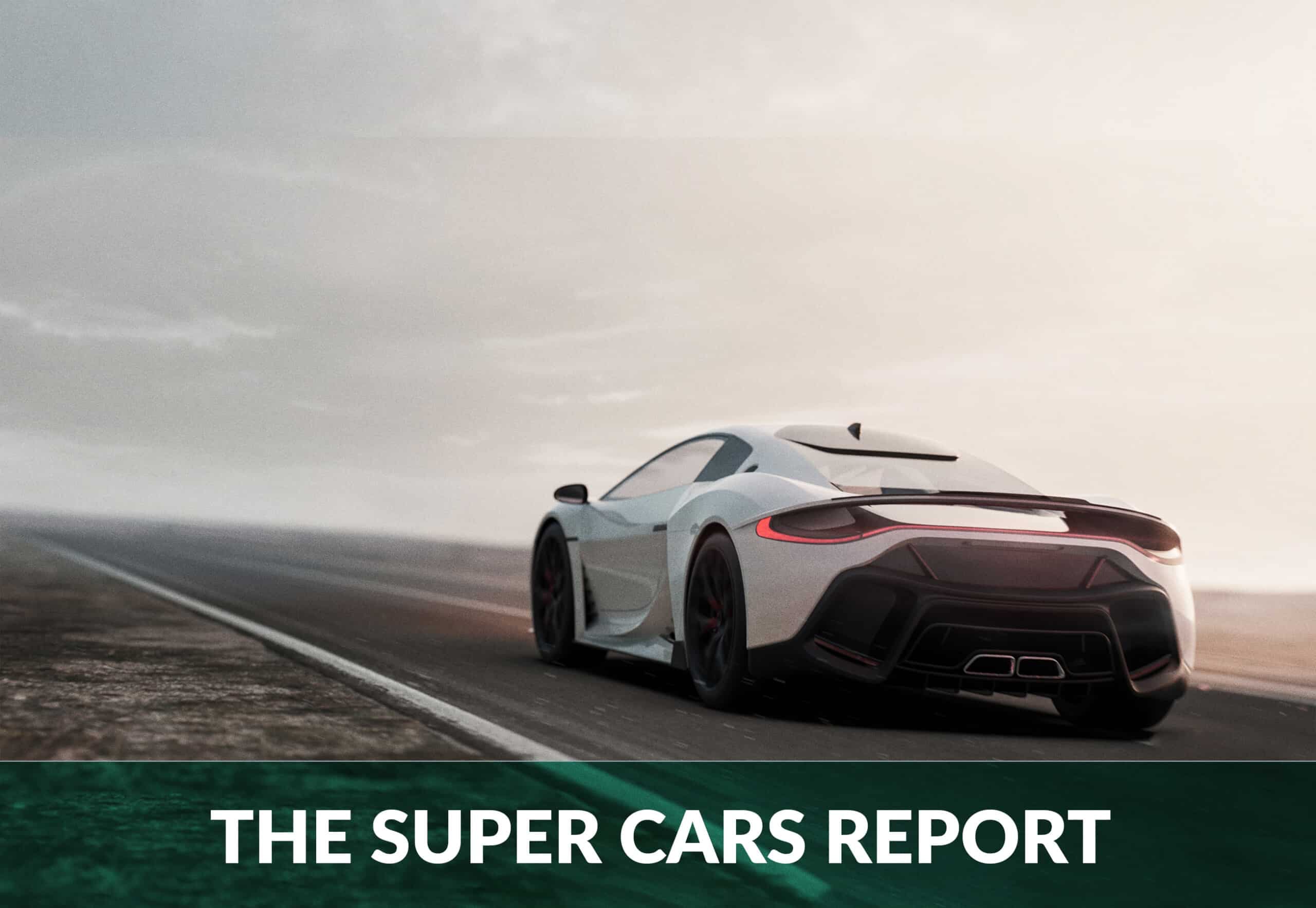 Which supercars are the most expensive to fill up and how far will they take you on a full tank of fuel?

For those who can afford to buy a supercar, the price of fuel is probably the least of their worries. The world’s most expensive vehicles are designed with power, speed, and style in mind, with less of a focus on fuel economy. In fact, the supercar with the worst fuel economy uses a staggering 30.1 liters for every 100 kilometers…

However, both the cost to fill up a supercar and the distance that you can drive on a full tank vary quite a bit between these luxury models.If you’re currently learning to drive, then buying a supercar is probably likely to be a distant dream, but here’s a look at what you can expect if you’re ever fortunate enough to find yourself behind the wheel of one.

Remember that the actual distance you can travel will depend on a number of factors, such as an individual’s driving style, the weather, and vehicle load and these figures are just estimates based on the fuel efficiency and fuel tank capacity of the vehicles.

Which supercars can travel the furthest on a full tank? 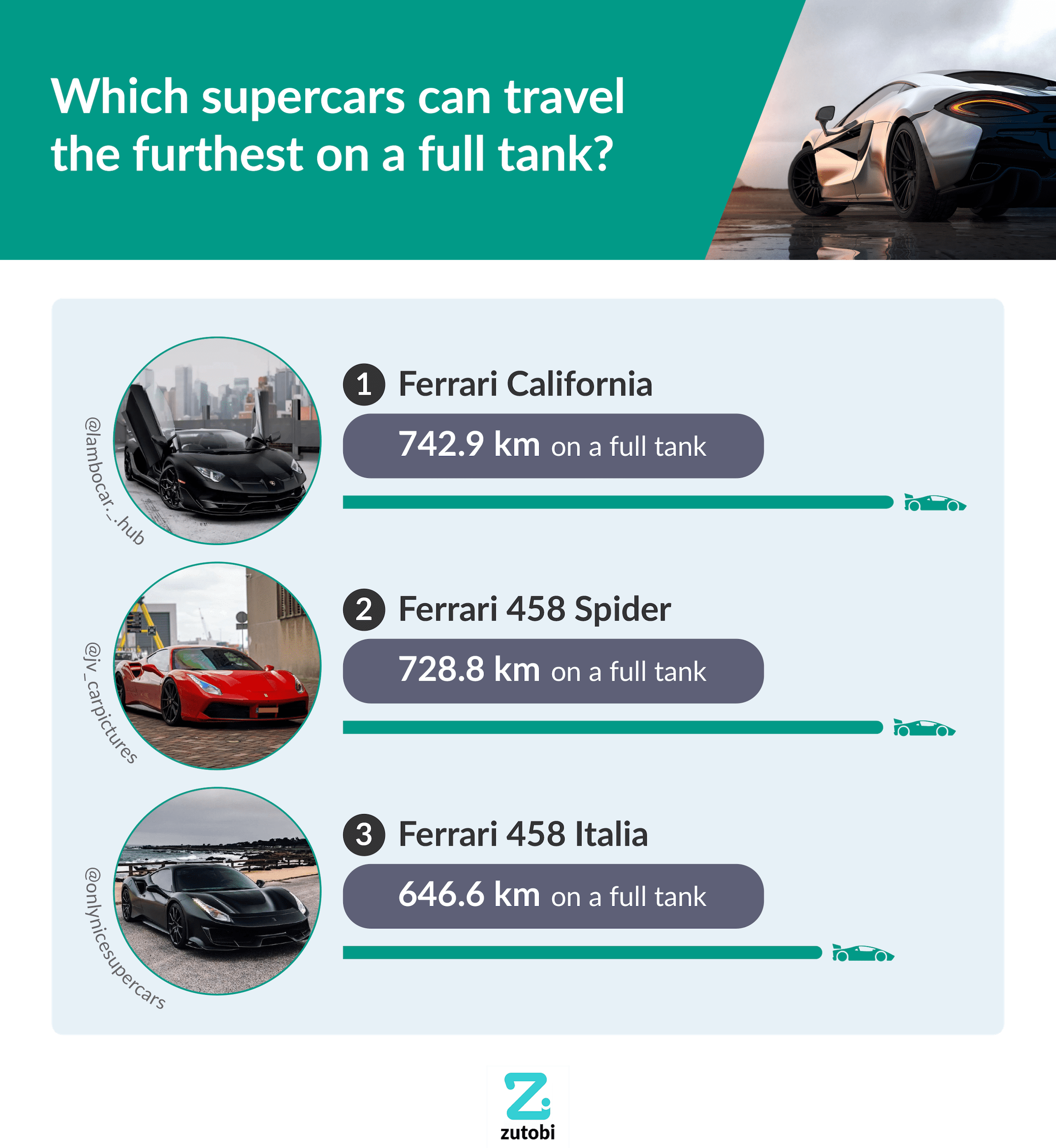 Topping the list is the Ferrari California, which has a fuel consumption of 10.5 liters per 100 km, which is low for a supercar, as well as a 78-liter fuel tank, which equates to 742.9 km on a full tank. The California is a grand tourer hardtop convertible that was manufactured between 2008 and 2017.

Another Ferrari comes in second place, the 458 Spider, which has a slightly larger fuel tank than the California, but also has a worse fuel efficiency, for an estimated distance of 728.8 km on a full tank. The Spider is a convertible version of the 458 Italia that ceased production in 2015.

Interestingly, both the 458 Spider and California actually have a higher estimated distance than the world’s most popular car, the Toyota Corolla, which has a fuel efficiency of 7.1 k/100km and a fuel tank capacity of just 50 liters, for an estimated full tank driving distance of 704 km.

Completing a Ferrari top three is the original version of the Ferrari 458, the Italia, which has an estimated full tank driving distance of 646.6 km. While it has the same sized fuel tank as the Spider variant, it has slightly worse fuel efficiency. 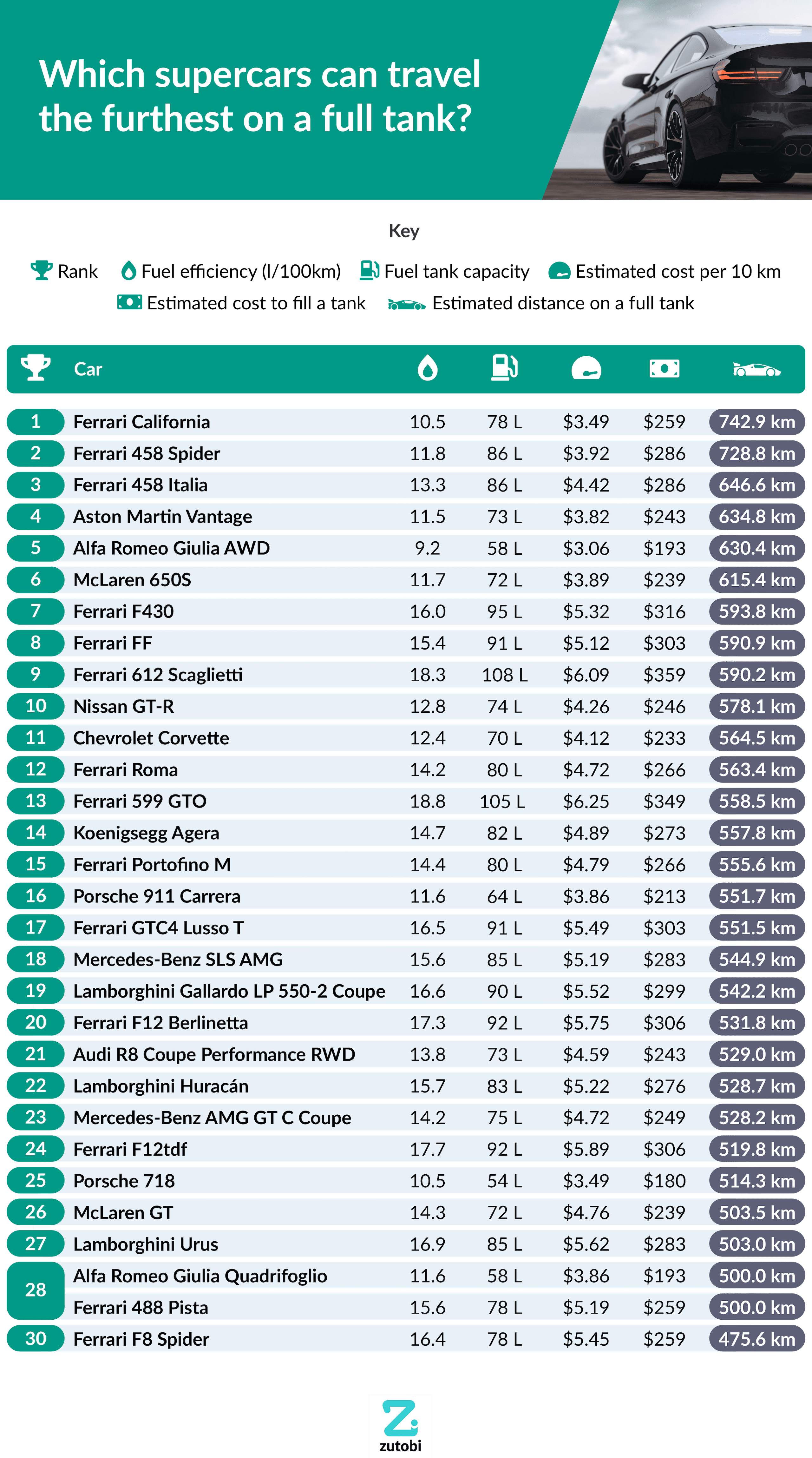 Which supercars are the most expensive to fill up? 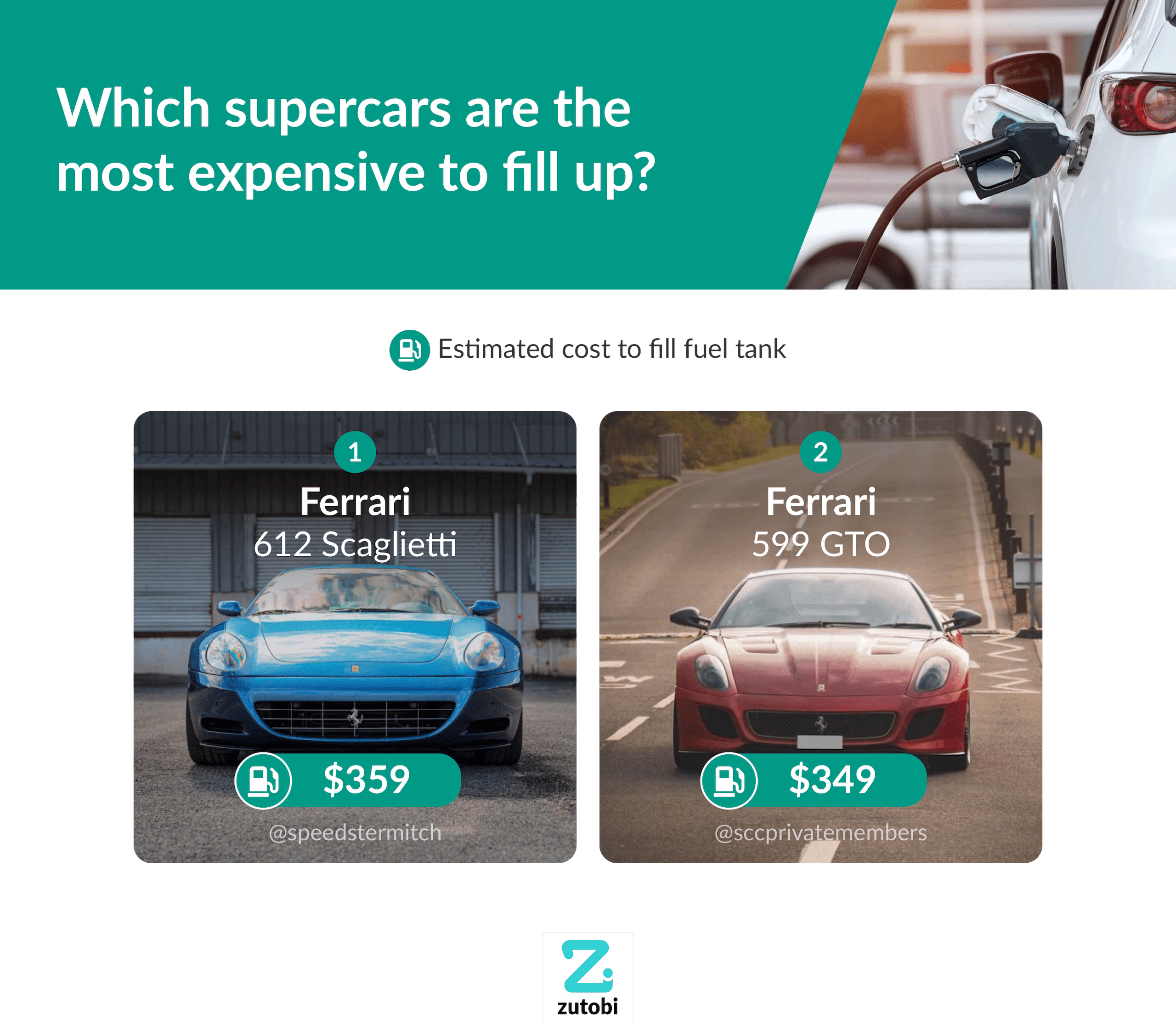 If you’re worried about the cost of fuel, then perhaps a supercar isn’t for you, but the most expensive on our list to fill was the Ferrari 612 Scaglietti, which has a 108-liter fuel tank, meaning that at an average cost of 146.1p per liter means it would cost over $359 to fill.

Another Ferrari is second-most expensive to fill up, with the 599 GTO’s 105-litre fuel tank costing $349 to fuel. The GTO is a road-legal version of the 599XX track day car and when it was released in 2010, was claimed to be Ferrari’s fastest ever road car.

Which supercars use the most fuel while driving? 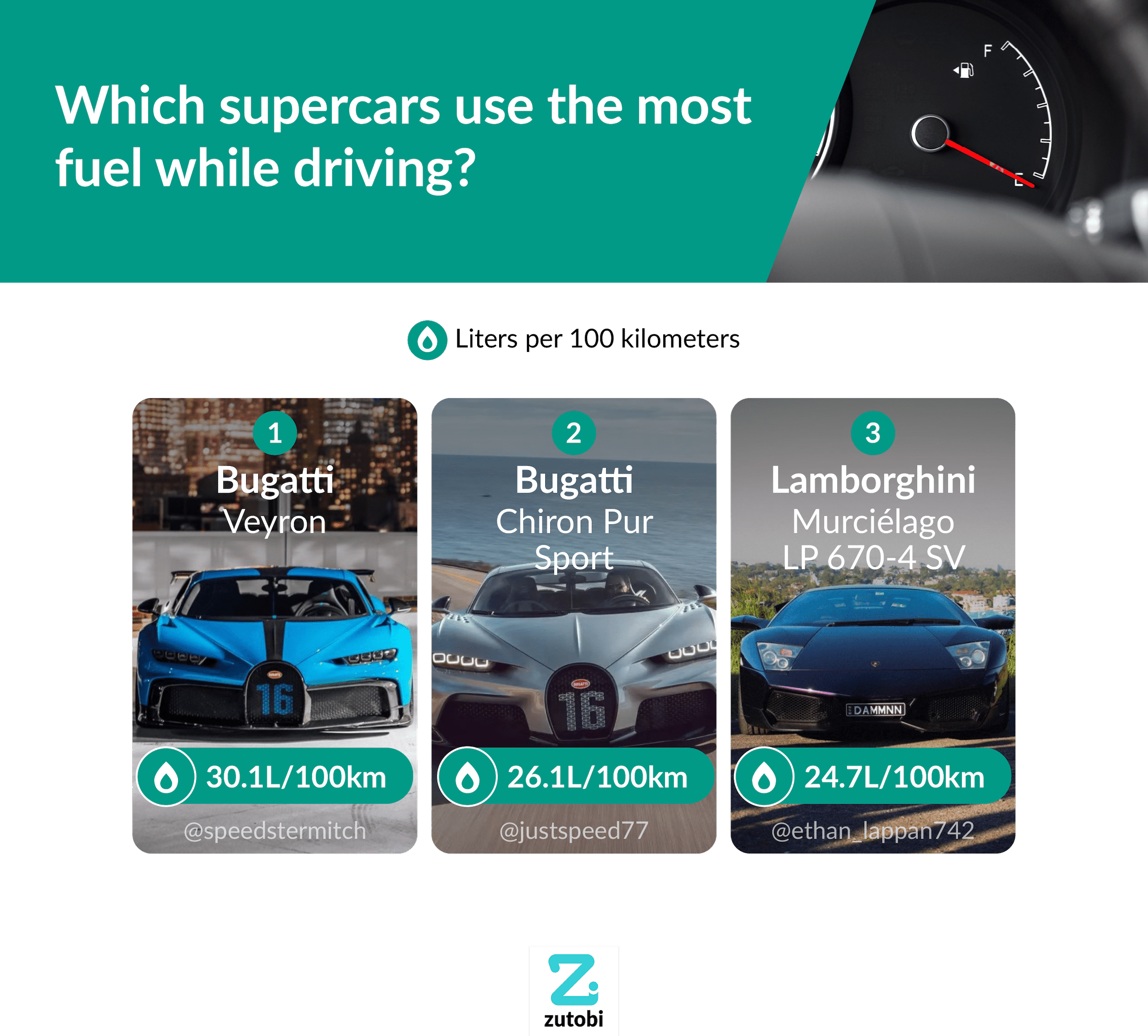 By far the most gas-guzzling supercar is the Bugatti Veyron, with a very poor fuel efficiency of 30.1 liters for every 100 kilometers.

The Veyron is one of the fastest street-legal cars in the world, with a top speed of over 267 mph but if you’re looking to take one out for a spin, you’ll have to make sure there’s a gas station nearby!

Another Bugatti takes second place, with the Chiron Pur Sport going through 26.1 liters for every 100 kilometers of road.

The Pur Sport is a handling focus model that was released in 2020 with an even worse fuel economy than the original Chiron due to having a huge wing added to the rear of the car.

The worst non-Bugatti supercar when it comes to fuel efficiency was the Lamborghini Murciélago LP 670-4 SV, which consumes 24.7 liters of gas for every 100 kilometers.

Which supercars are the most expensive to fill up? 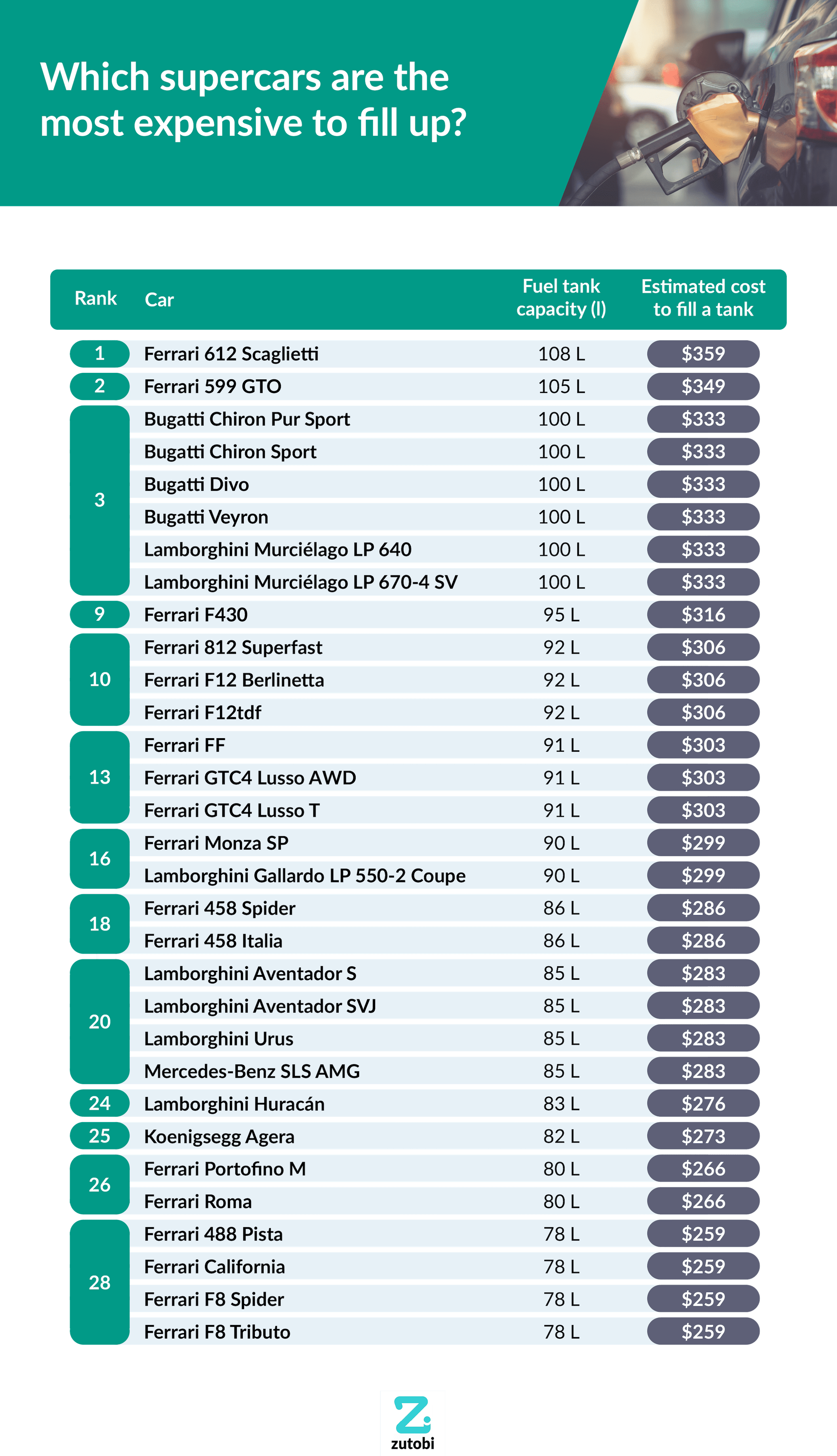 Looking at a number of popular supercars from the last decade, we took both the combined fuel efficiency (in liters per 100 km) and fuel tank capacity (in liters) from The Car Guide.

The fuel tank size for each vehicle was then multiplied by $3.326 (the average regular gas price according to the AAA as of January 21st, 2022) to estimate the cost to fill a tank.

We also converted the fuel efficiency into kilometers per liter, before multiplying this by the fuel tank capacity to estimate the distance that can be driven on a full tank of fuel.

Note that these are just estimates and the actual distance you can travel will depend on a number of factors, such as an individual’s driving style, the weather, and vehicle load.