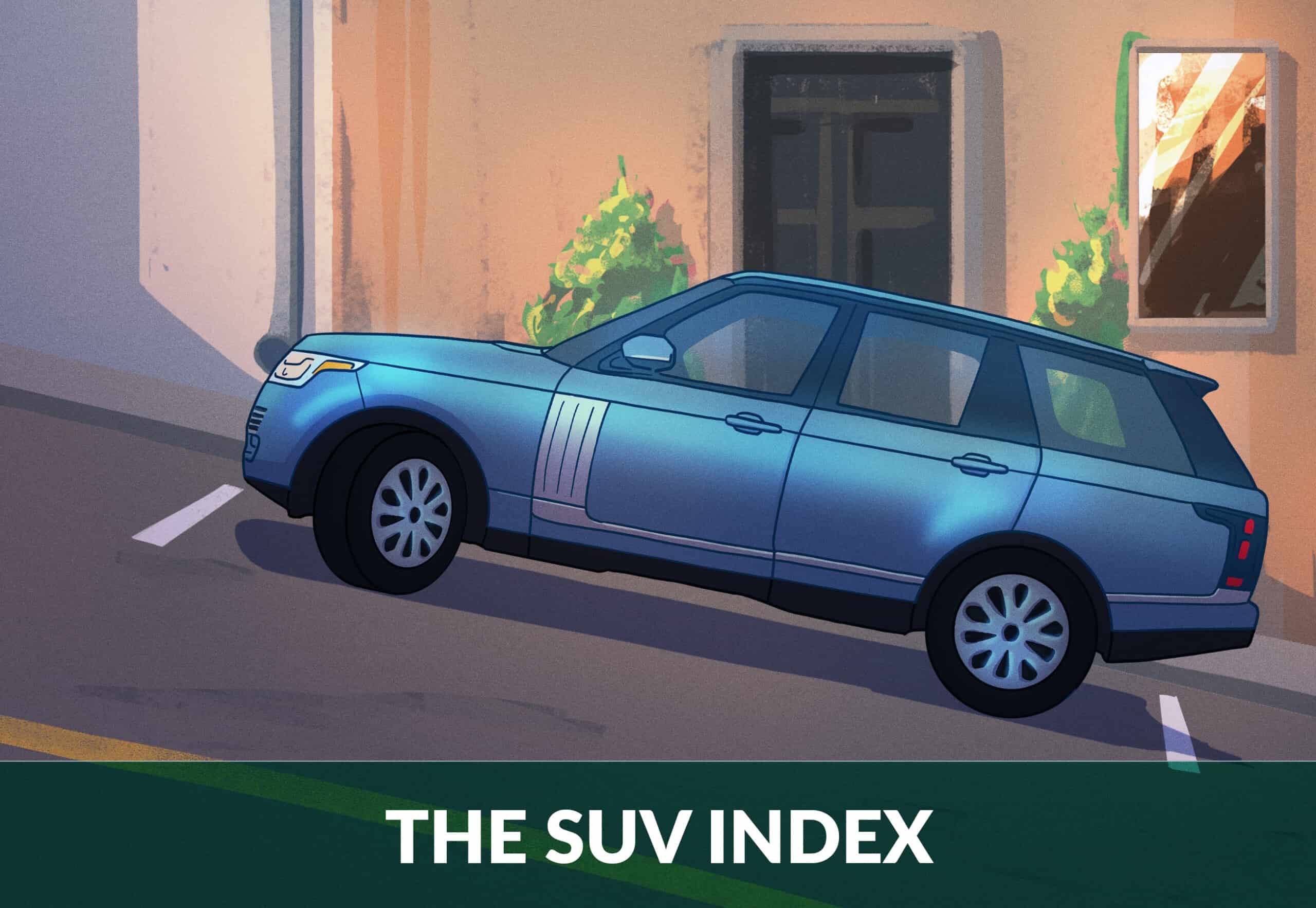 The popularity of SUVs is at an all-time high, with global SUV sales reaching a record-breaking 30.7 million in 2020. If you’re looking to buy a new SUV you might not have thought about the impact of your location on the cost. It’s no secret that SUV prices vary by country, and the same model can cost over twice as much in some countries than in others.

But why does the price of the same SUV vary by location? Imported SUVs are subject to taxes and duty, however, in some places such as Singapore, government regulations mean retail prices can become significantly inflated.

Although new SUV sales are highest in North America and Europe out of all regions, the SUV market has witnessed a growth in demand in South America and Asia in recent years. In 2017 there were around 10 million new and second-hand SUVs sold in China alone.

The Most Expensive Places to Buy an SUV 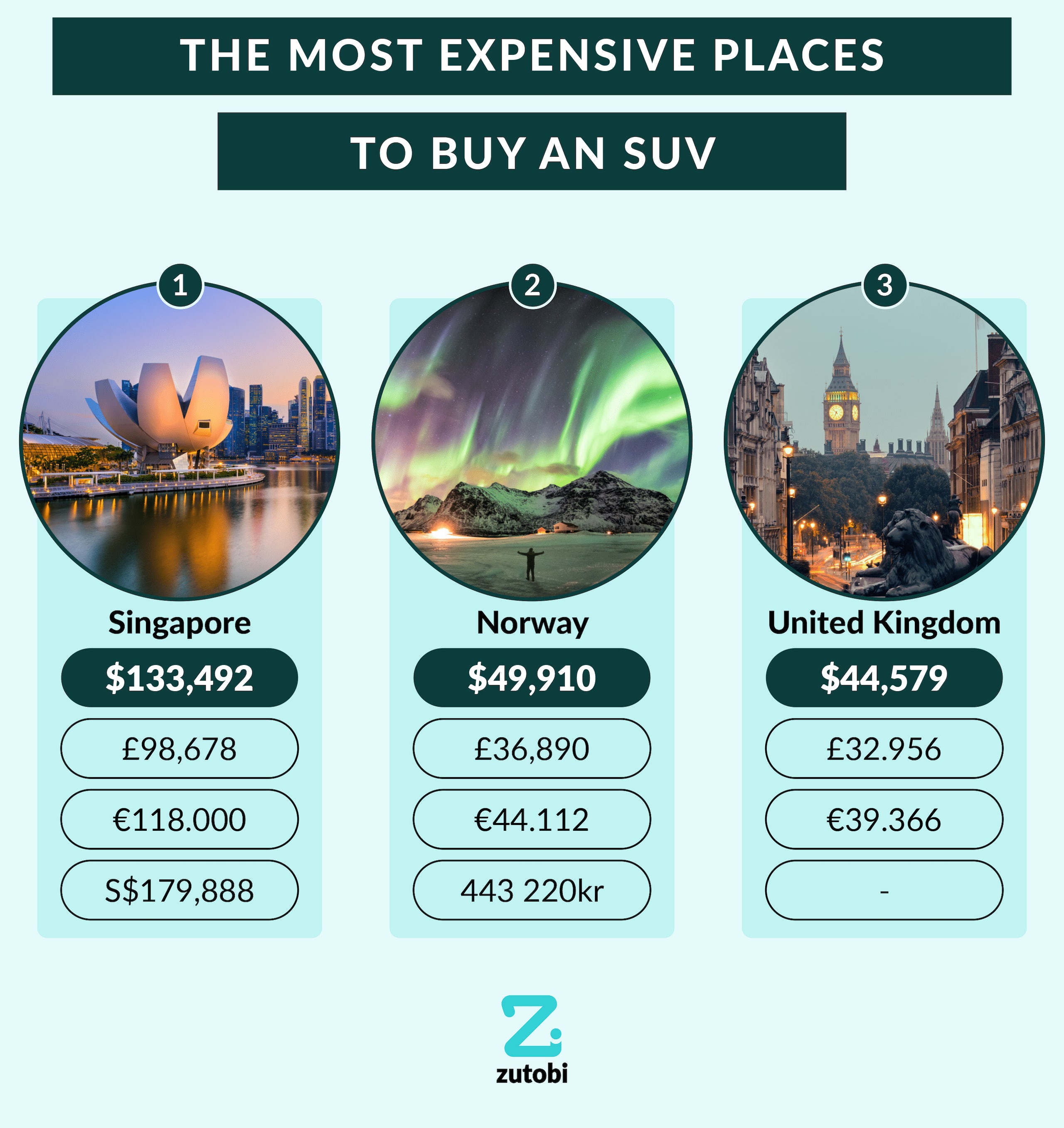 The Toyota RAV4 is the world’s most popular SUV, according to worldwide sales, with the latest version offered as a self-charging hybrid.

The world’s best-loved SUV carries its highest price tag in Singapore, where a new model costs around US$133,492. In Singapore, cars are usually owned exclusively by the upper and upper-middle classes due to their high prices.

All cars in Singapore are subject to ARFs, or Additional Registration Fees, which are taxes applied to all vehicles. The amount imposed is based on the car’s open market value.

One other reason for the premium car prices in Singapore is the government’s regulation of the number of cars in the state, with Certificates of Entitlement, which are licenses for owning a vehicle.

In second place for the most expensive place to buy a RAV4, those in Norway would pay around $49,910, according to the manufacturer’s website.

The high prices for SUVs in Norway is likely the result of high taxes on cars imposed by the government, where each imported vehicle is subject to 25% tax and additional purchase tax. For lovers of electric cars, the good news is that the 25% tax does not apply to EVs.

One of the most expensive countries to purchase an SUV is in the UK, where a new model costs around $44,759.

The Cheapest Places to Buy an SUV 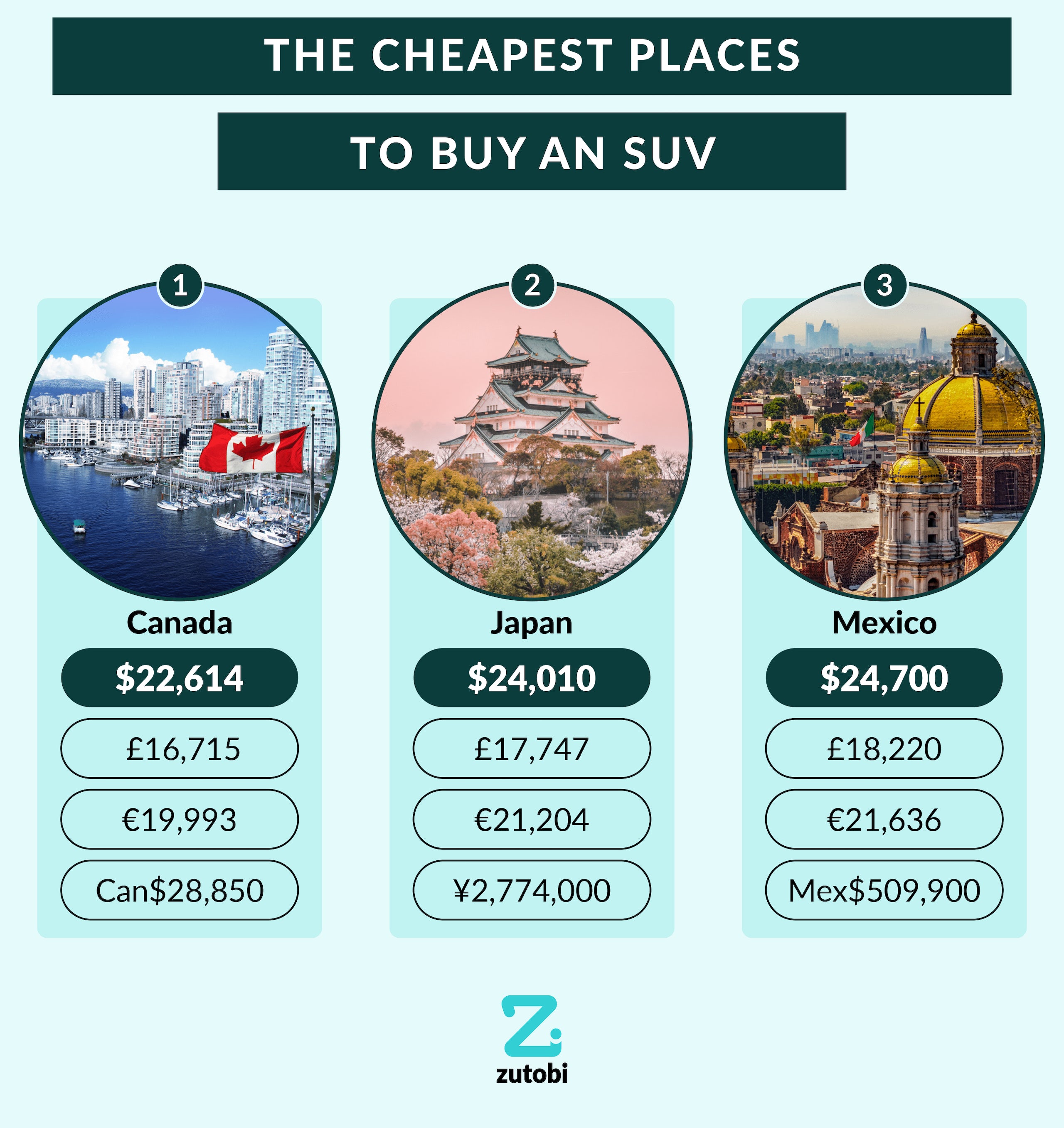 While not available in every country we looked at, the cheapest price we found for the RAV4 is in Canada, where the recommended retail price of a new model is equivalent to US$22,614.

Vehicles prices in Canada correlate to the Canadian economy, which can result in lower prices for new cars. The shipping costs from large car-producing countries like the US are significantly lower to Canada than to Europe.

In Japan, the country where Toyota was founded, you can purchase a gasoline version of the RAV4 for as little as $24,010.

With a reputation for being one of the biggest automobile-producing countries in the world, as the home of Toyota, Nissan, Mazda, and Mitsubishi, Japan also has one of the largest economies in the world. These two factors mean Japanese domestically produced SUVs can be offered at a retail price much lower than in most European countries.

Mexico is one of the cheapest countries to buy a RAV4, at a starting price of US$24,700.

Although the RAV4 has a lower price in Mexico than most nations, the average car is said to be priced at around three times the average annual salary in the country. 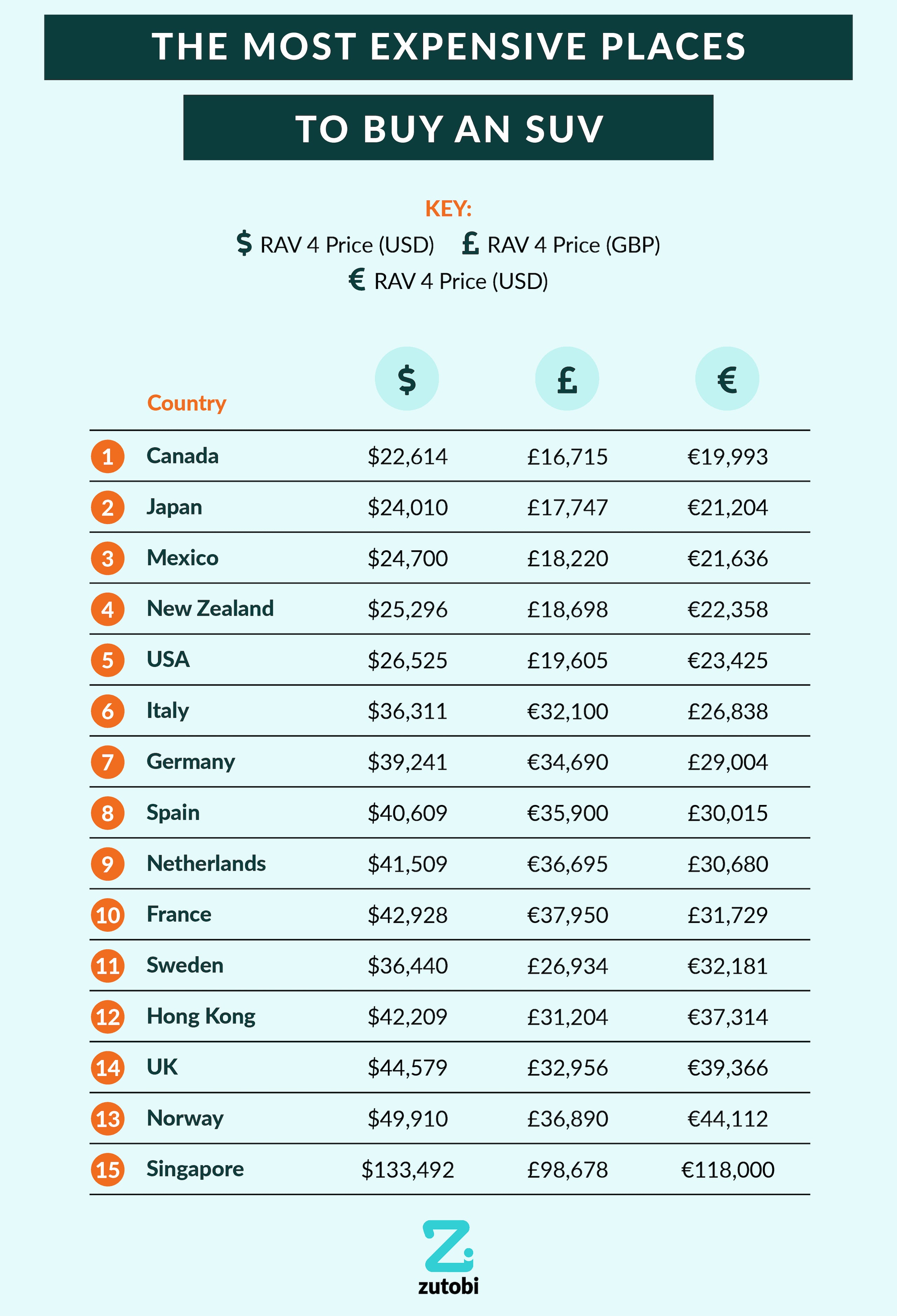 The Most Expensive Places to Fill an SUV With the highest cost for fuel of all the countries we looked at, Hong Kong is the most expensive place to fill a Toyota RAV4. A full 55-liter tank of gasoline would cost the equivalent of US$149 to fill.

In third place, the Netherlands is one of the most expensive countries to fill a Toyota RAV4. High gasoline prices mean that a 55-liter tank would cost around $126.

The Cheapest Places to Fill an SUV 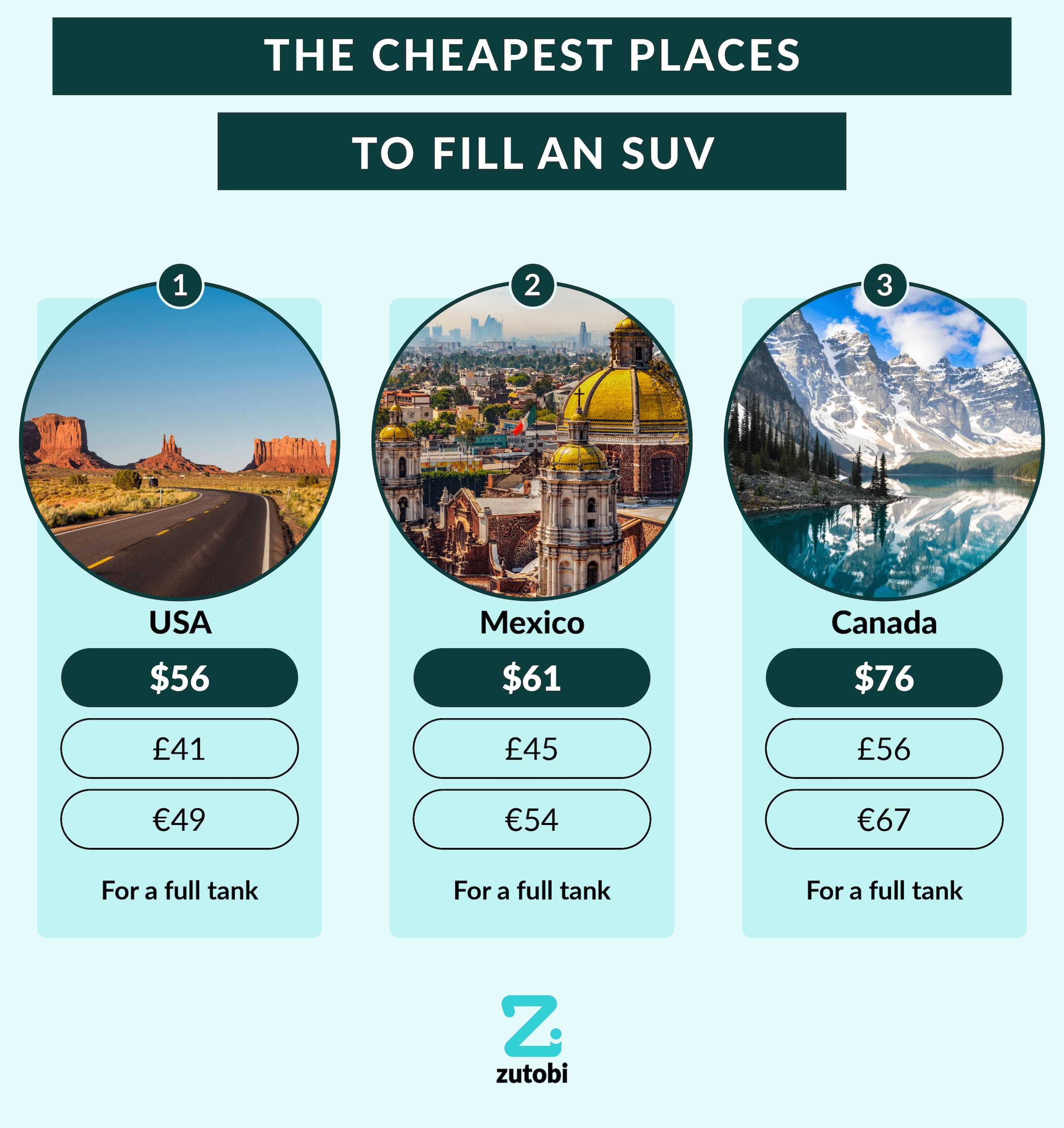 The US is the cheapest country we looked at to fill a full tank of a Toyota RAV4. With the 55-liter fuel capacity of the newest 2020 RAV4, a full tank costs around $56.

In the United States, you can buy a new Toyota RAV4 at a starting price of $26,525, one of the cheapest countries we found to buy the vehicle.

Mexico is one of the cheapest countries to buy and fill a Toyota RAV4. At a gasoline cost of around US$1.116 per liter, a 55-liter tank would cost US$61.

In third place, Canada is one of the cheapest countries to fill a Toyota RAV4 with gasoline. A 55-liter tank would cost around US$76 to fill. 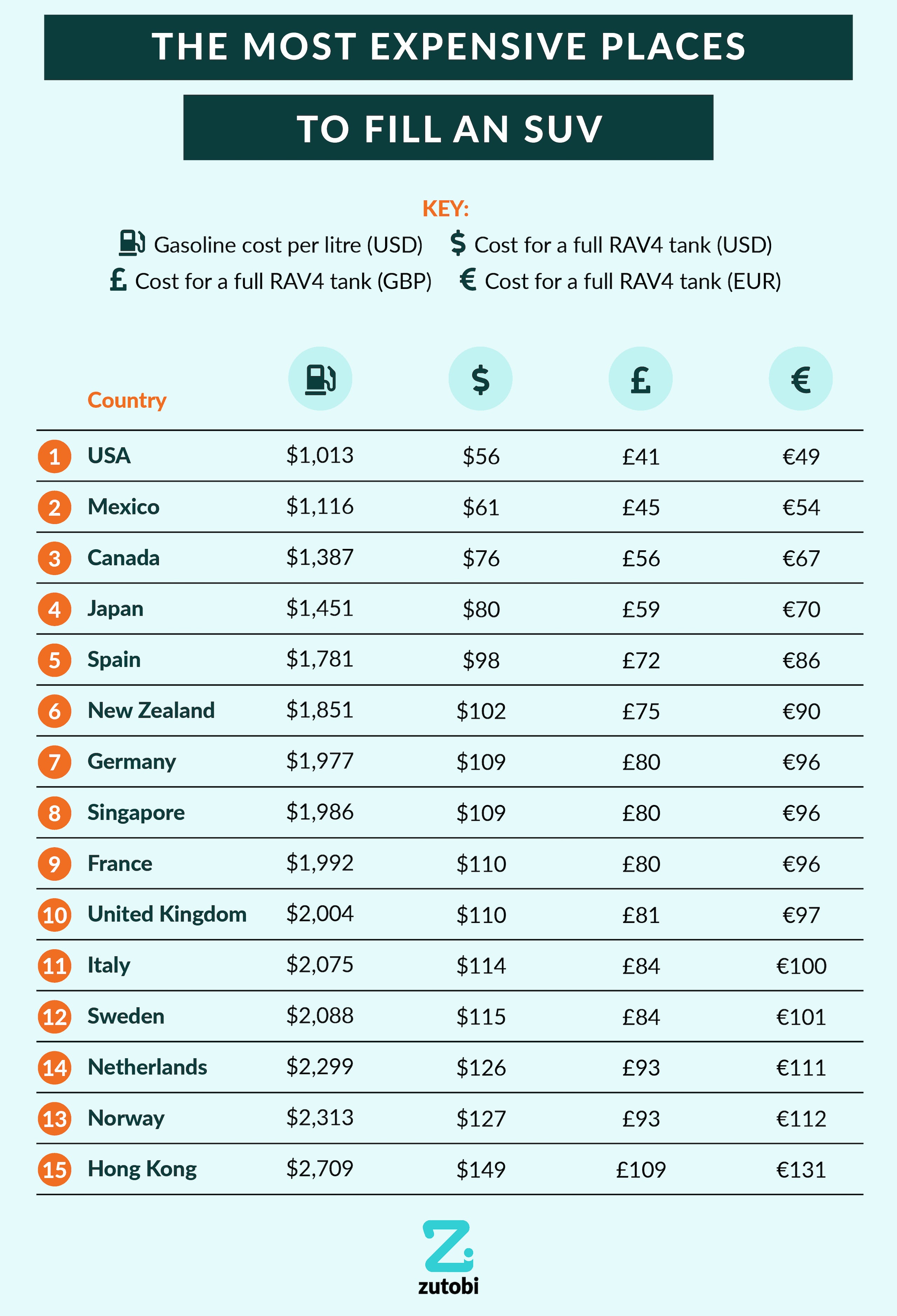 We wanted to discover how the price of an SUV changes around the world, therefore we researched the average price of the best-selling SUV in different countries. Where available, the starting MRP of each model SUV was taken. All prices were sourced from Toyota’s websites, and where multiple variations of the Toyota RAV4 were available to purchase, the price of the cheapest version was used. This version was the gasoline, 2020 newest available model.

In some cases, the SUV models we looked at were not available for sale in each country, and in some cases, a recommended price was not listed. For these SUV models, prices were omitted from the table in those countries where information was unavailable.