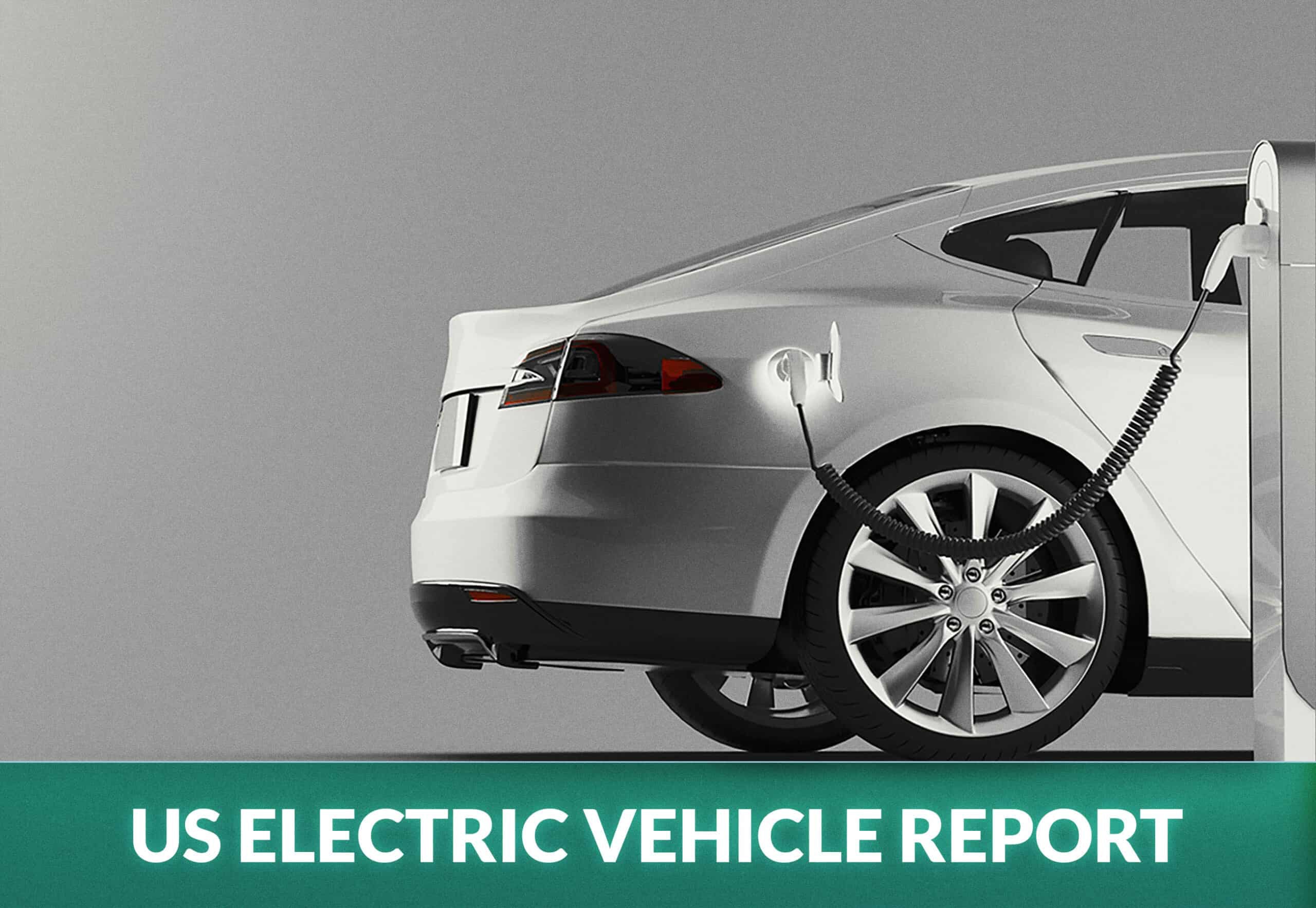 There have been a number of promises made around the world about the expansion in the electric vehicle (EV) market, and with the US set to ban the sale of diesel and gasoline vehicles by 2035, those who are learning to drive may soon have to look toward an electric vehicle when purchasing their first car. But what’s the current state of play in the US? How realistic is a push towards increases in the usage of electric vehicles? How many charging stations are there, and where?

The US is a vast country, with each state playing by its own rules to a certain extent and, with EVs relying heavily on a network of charging stations to operate effectively, there’s still a long way to go before the country is really ready for a large rollout of electric vehicles. We’ve crunched the numbers and looked at how well the different states are doing, which ones have the infrastructure, and how EV take up currently compares to other vehicles.

We’re also looking at how the numbers have changed since our last edition of the 2021 US Electric Vehicle Charging Point Report.

States with the most charging stations per EVs

When you’re considering switching to an electric vehicle you need to consider the competition for charging points. It’s all well and good to go green and try and cut your emissions, but if you can’t charge your vehicle, you aren’t going to get very far. Here are the states with the most chargers per 100 electric vehicles. The state with the highest ratio of chargers to EVs is North Dakota, where there are around one and a half electric cars for every charger, with 63.2 per 100 chargers per EVs.

While the state actually has the lowest number of electric vehicles overall, the fact that it has such a high ratio of chargers suggests that the local government is doing their bit to try and encourage residents to make the switch to electric.

Another state that has a relatively low uptake of electric vehicles, but with a comparatively high number of chargers is Wyoming, with 55.8 chargerging stations per 100 EVs.

Wyoming is one of a number of states in the United States that received government funding to create a network of chargers connecting highways right from the Atlantic Coast to the Pacific.

Not far behind Wyoming in terms of its rate of chargers to cars is Mississippi, with 55.5 charging points for every 100 EVs.

As with both North Dakota and Mississippi, the number of registered EVs in the Magnolia State is relatively low, but with a decent charging infrastructure starting to develop to encourage more people to make the change.

States with the fewest charging stations per EVs

However, a number of states are struggling to keep up with the rapidly increasing demand for EVs when it comes to charging infrastructure. 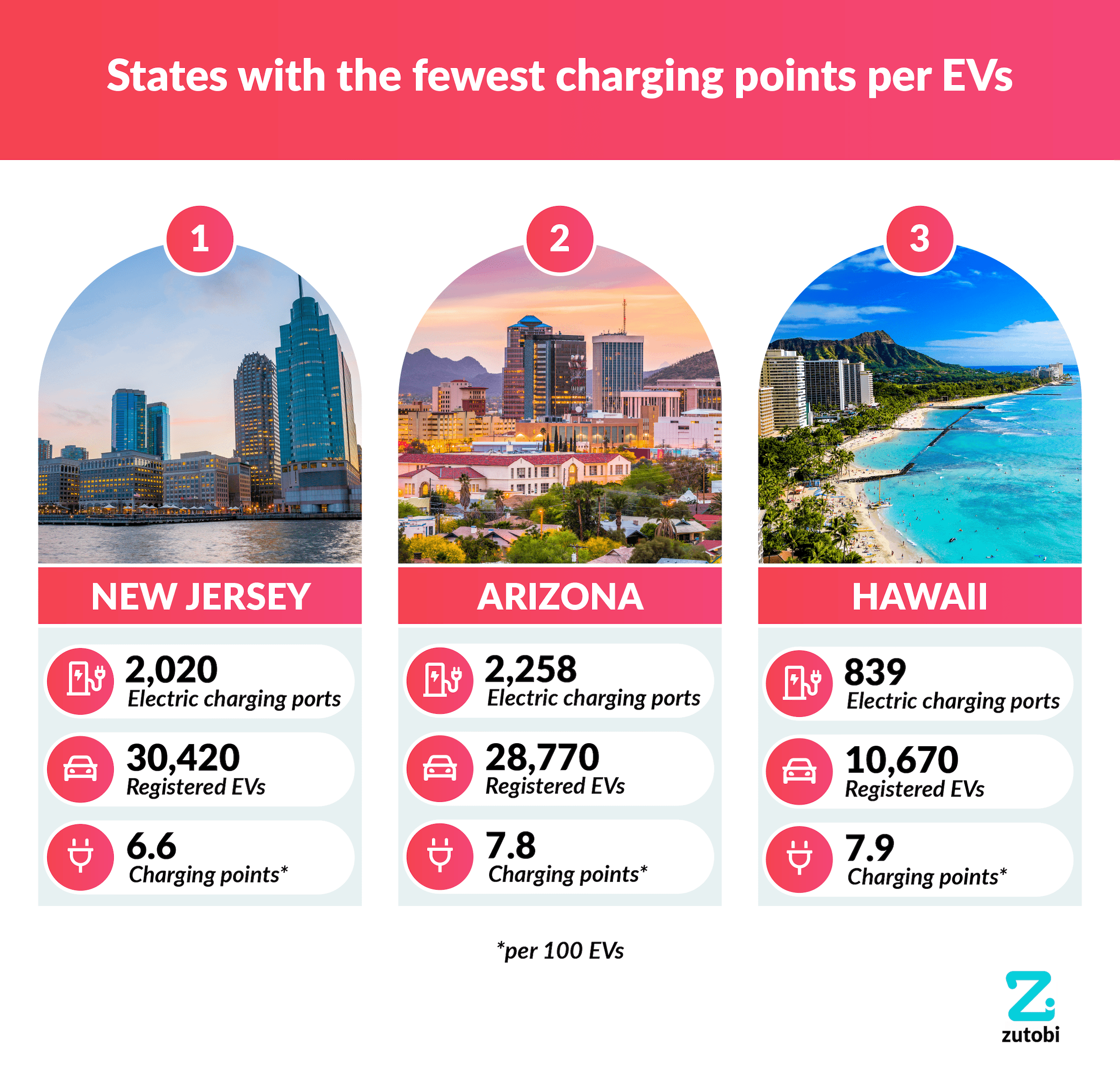 At the other end of the scale, New Jersey has just 6.6 EV charging stations for every 100 electric vehicles in the state (which currently stands at over 30,000).

The local government is pledging to give an incentive of $250 to those buying and installing a charger at home, as well as spending $4 million on installing chargers at popular tourist destinations.

Arizona has a growing number of electric vehicles, with 28,770 currently registered, but charging infrastructure is still clearly lacking with a rate of 7.8 charging points per 100 electric cars.

As is often the case, these chargers are largely based in major cities, meaning that largely rural parts of the state are essentially cut off and prevented from buying an EV.

Hawaii has slightly more chargers per EV compared to Arizona, at 7.9 and while 10,670 may not seem like too many EVs in the state, they make up a large percentage of vehicles on the islands.

Of course, as an island state, Hawaii isn’t as vast as many others in the country, but it’s clear that it still has some way to go in terms of keeping pace with charging infrastructure.

How many EV charging stations are there in the US? State-by-state breakdown

While the infrastructure is important, it’s also important to highlight that many states have a strong uptake in electric vehicles in comparison to the total number of vehicles on the road. No surprise here – despite its staggering number of private cars on the road, 13,957,692 to be exact, it also has by far the largest number of EVs on the road, with 425,300, which equates to just over 3% of total cars being electric. California has long been at the forefront of EV adoption, with active support from the local government with a number of incentives, both financial and non-financial, such as a rebate of up to $2,500 and access to carpool and high-occupancy vehicle lanes.

The island state of Hawaii may seem like a surprising place for an EV success story, but there are strong incentives, short driving distances, and a climate that lends itself to EV performance. This means it’s no real surprise that the island is seeing a strong uptake in EVs, with 10,670 electric vehicles on the roads, meaning 2.24% of cars on the road are electric.

Another state that has embraced the electric vehicle revolution is Washington, with 1.85% of vehicles being electric.

The state has taxes on gasoline sales and car license fees, although recently stopped short of passing a bill to require all cars sold in the state to be electric by 2030. A big part of the reason why North Dakota and Mississippi are amongst the states with the most chargers per electric vehicle is unfortunately that they haven’t experienced great uptake, with both having just 0.1% of all vehicles being electric.

And while the fact that both have a good number of chargers per vehicle is promising, both are somewhat lacking when it comes to financial incentives for drivers.

Finally, West Virginia also has a poor uptake of electric vehicles, with a rate of just 0.12% of vehicles registered in the state being powered by electricity.

Again, this could largely be put down to a lack of incentives or exemptions from taxes, with EV drivers actually having to pay an annual fee of $200.

States with the highest percentage of EV adoption

How have the number of EVs and charging stations in the US changed?

Following the 2020 election, the Biden administration announced that they expect 50% of all vehicles sold in the country to be electric by 2030 and the sale of fossil fuel vehicles banned by 2035, accomplished through purchase incentives, taxes and restrictions on internal combustion vehicles, new congestion charging zones and tougher emissions standards.

Since first taking a look at the EV charging station infrastructure in the US a year ago, the numbers of both electric vehicles themselves and chargers have both continued to increase.

In total, the number of electric vehicles in the US has increased by 87.5% since the last edition of the report, growing from 543,610 to just over a million today.

However, the growth in public charging outlets hasn’t quite matched that, growing from 98,422 to 128,554 over the same period, an increase of around 31%.

While it’s encouraging that more people are choosing to buy electric vehicles, the speed at which chargers are installed clearly needs to improve alongside this, and could be set to do just that in the coming years, with the president promising to have 500,000 installed by 2030.

At state level, Delaware was the state that saw the biggest increase, not just in the number of EVs on the road (170.8%) but also when it came to chargers too (68.8%). This growth has been backed by a rebate program in the state, including $2,500 for battery electric vehicles and $1,000 for hybrids.

However, states where EV adoption is clearly struggling to gain traction include Oklahoma (3.6% increase in EVs) and Wyoming (9.5% increase in chargers).

States with the biggest increase in registered EVs

States with the biggest increase in charging stations

The 2021 US EV Charging Point Report