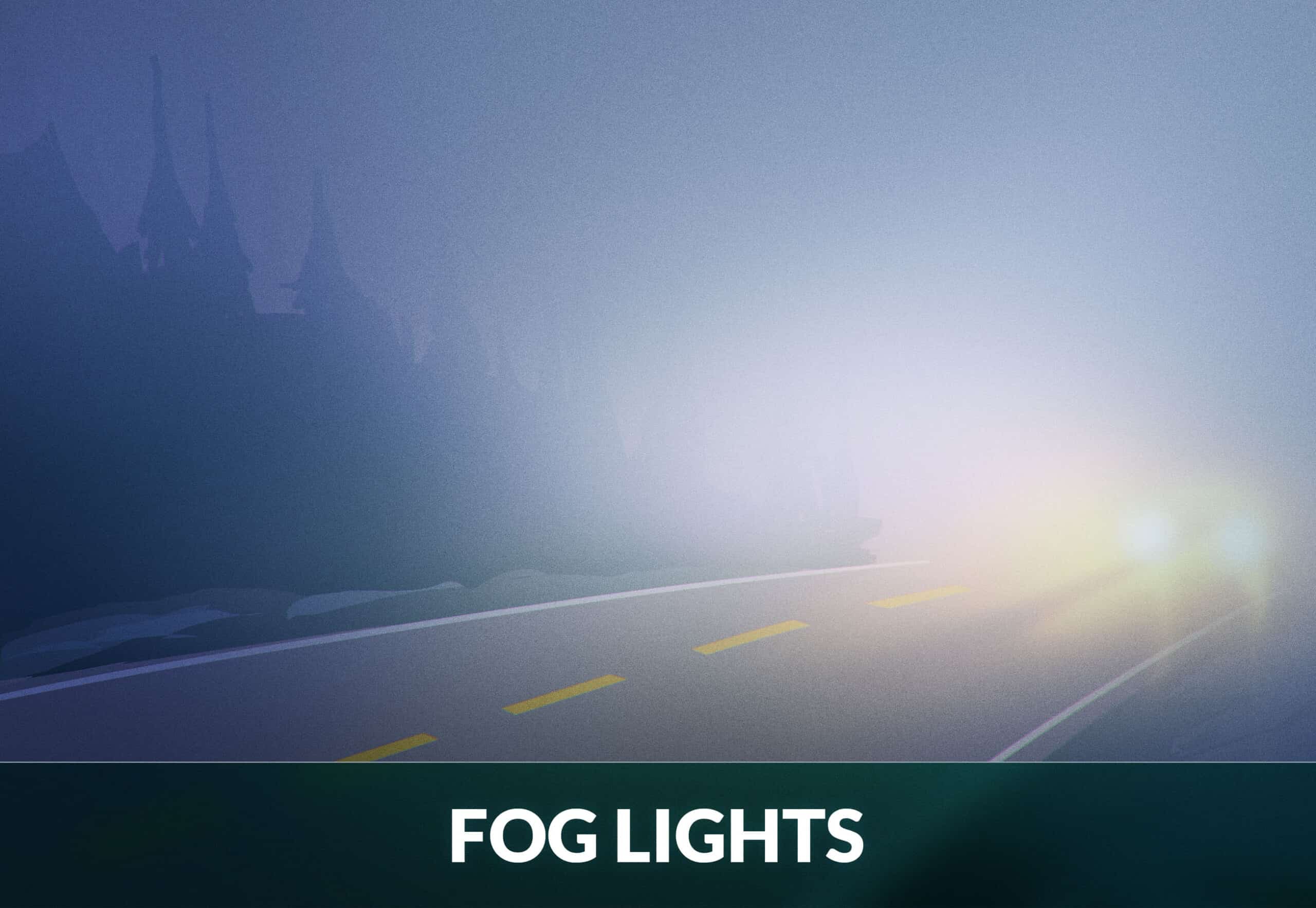 What are Fog Lights and When Should You Use Them?

Driving in unsafe weather conditions can make driving extremely challenging. Luckily, car makers have implemented features to help drivers navigate situations such as these. Fog lamps are far from standard on most American vehicles, but manufacturers regularly offer it in higher trim levels of even economy cars. Many drivers confuse fog lamps for high beams or other similarly colored lights.

Car enthusiasts will tell you that fog lights are a must-have, especially in cold and rainy climates. However, a tool is only as good as how it’s utilized. In this blog, we’ll teach you everything you need to know about fog lights and when they should be used.

What are Fog Lights?

Fog lights are featured on the front of vehicles and increase driver visibility. They are generally positioned under the main headlights and are shaped like a bar. The location in which fog lights are located on the vehicle allows them to emit light that pierces the fog and creates a clear field of vision for the driver. As its name suggests, this is a serious lifeline in foggy conditions, where visibility is extremely low and normal headlights can’t pierce through very well. Fog lights come in both yellow and white, depending on the specific car’s manufacturer.

It is important for drivers to understand the type of situations in which they can use fog lamps, and when they should not be used.

Also, each state has very specific rules when it comes to using them, so make sure to understand what applies in your state so you know when you can legally use them.

How to Use Fog Lights

Your front fog lights are usually activated via a separate switch from the main light control. Some cars also allow drivers to utilize fog lights from a button in their infotainment cluster. There are a multitude of ways to turn on your fog lights, so it’s best to consult your owner’s manual for more detailed information.

Rear fog lights are bright lights that are generally the same brightness as your brake lights. They are not very common in the US, as the National Highway Traffic Safety Administration does not require automakers to include rear fog lights when manufacturing new vehicles. To obtain one, you have to obtain it from a third party vendor. They’ll give you a better idea of exactly how to set up your rear fog lights and how they should be used.

When to Use Fog Lights

You can use fog lights in a variety of low visibility settings, this includes fog, heavy rain, and dust storms. Using low or high beam lights in these situations can make visibility worse, as their positioning makes light reflect back towards the driver, this is especially true when it comes to high beam headlights (never use high beams when driving in fog!).

The low placement of fog lights allow them to emit rays that cover surface area below the fog, allowing you to clearly see what obstacles or other vehicles exist in front of you.

Can You Use Fog Lights When There’s No Fog?

Technically speaking, you can utilize your fog lights whenever you’re in an area of low driving visibility or poor weather. However, they are not designed for driving at high speeds.

If it helps you navigate unsafe road conditions though, it’s best to keep them on until you no longer need them. However, several states have very strict laws surrounding fog lights that drivers should keep in mind while utilizing them.

For example, Texas has very specific laws relating to the issue. In the state, drivers are not permitted to have more than two fog lights. Additionally, fog lamps should be aimed a certain way to reduce their intensity. This law was put in place to ensure drivers are not blinding each other with their fog lights while driving on highways and public roads. Many other states have implemented similar regulations to reduce the number of accidents that occur annually.

Are They Good to Have?

The answer is yes! If you have the option and can afford the upgrade, fog lights are an essential feature that will allow you to get a better view of the road. If you live in a climate where weather can be unpredictable, purchasing a vehicle with front and/or rear fog lights will allow you to drive your vehicle at any time without fear of reduced visibility.

Automatic Cars Explained: What It Is and How to Drive One

Sharing the Road with Other Road Users

As a driver, you must learn the rules of sharing the road with bicyclists, motorcycles, trucks, slow moving vehicles, low speed vehicles and horse-drawn carriages. Sharing the road requires that you understand how to adapt when you are driving to make the roads safe for everyone. Bicyclists Bicyclists have the same rights and responsibilities as […]

Emergency Vehicles & Law Enforcement: What to Do and How to Act

When approaching an emergency vehicle on the roadway with flashing lights or sirens, you must yield the right-of-way in every situation. This includes police cars, ambulances, fire trucks, and other government vehicles with blinking or flashing lights.  Emergency vehicles are allowed to break traffic rules, such as driving on the wrong side of the road, […]