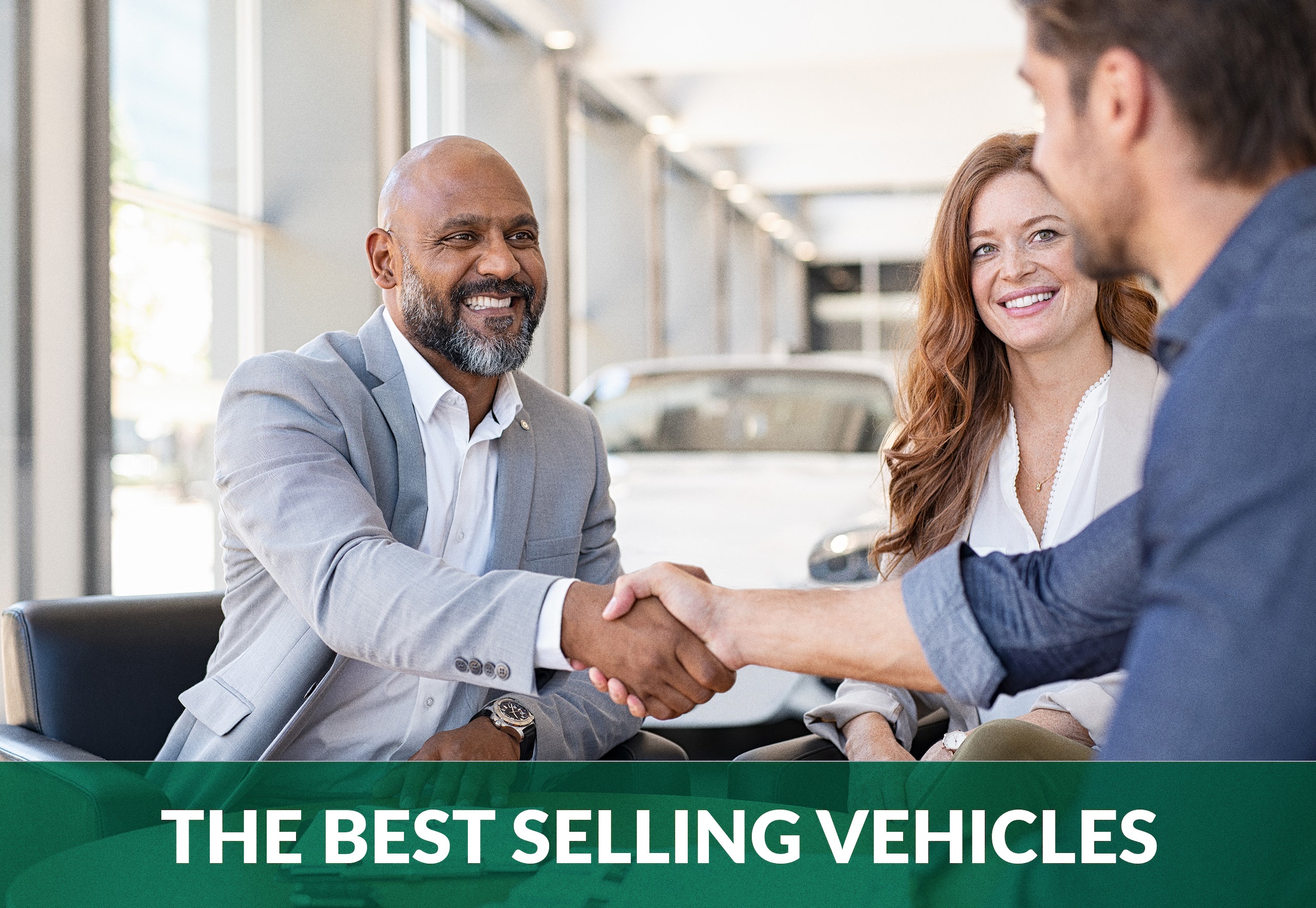 The Best Selling Motor Vehicles Around the World

What are the best selling cars in different parts of the world?

All across the world people pass their driving tests and look to get out on the open road on their own set of wheels. In every country, there are unique driving conditions, with weather conditions, quality of the roads, and local rules being just some of the challenges drivers face.

As a consequence, different cars suit some parts of the world more than others. Large off-road cars are preferable in some countries, whereas others favour a small hatchback. From the four corners of the globe to the four wheels on each car, we have studied sales data from around the globe to discover the most popular cars.

Best selling cars across the globe

In 2021 there were over 58 million new vehicles sold across the globe according to the VDA, with a large number of these being sold in China (over 21 million). The USA saw just under 15 million sales, and there were almost 11 and a quarter million sales across Europe. While there is no count of the number of each make and model of car sold across the world, we have compiled the specific model of vehicle and types of vehicles favoured by the most countries to discover the most popular cars around the globe.

Best selling car in the most countries 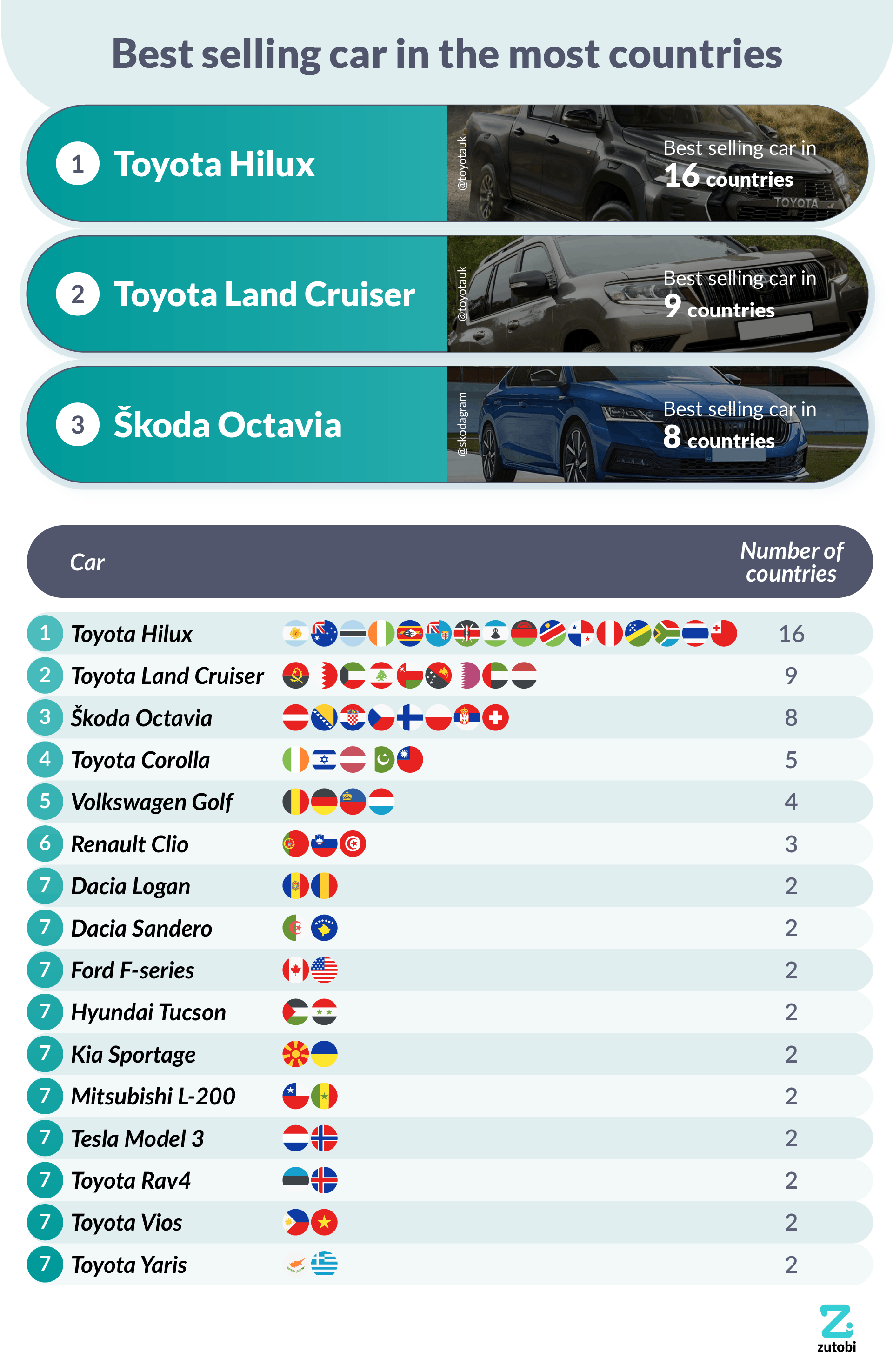 The Toyota HiLux is famed for its durability and hardiness, personified by the fact it became known as the indestructible car on Top Gear, after it survived being set on fire, and being flooded amongst other things. It is this rugged dependability which has resulted in it being very popular globally. Out of the 13 African nations studied, eight of them had the HiLux as the best selling vehicle, and in many developing nations without official sales stats, the HiLux is a common sight. Outside of Africa, the HiLux is also the best selling car in Australia, Argentina, and Thailand.

Another tough Toyota comes in second place, as their iconic off-roader is the best selling car in nine countries. Known for its ability to keep going anywhere on any terrain, the Land Cruiser is akin to the Land Rover and has massively surpassed its British rival in popularity. Back in the 1950s, the Land Cruiser prototype was tested by driving it up the side of Mt Fuji, and it has continued to push the boundaries of where a car can go ever since. Seven of the nine countries that favoured the Land Cruiser are in the Middle East, suggesting that the Toyota is the car of choice to tackle the desert sands in that region.

The Škoda Octavia is a relative newcomer compared to the other new cars, as it is just over a quarter of a century old. Now in its fourth generation, the Octavia offers a lot of versatility at a very reasonable price. It is sold as both a hatchback and an estate, and is known for being very spacious, reliable, and providing great value for money. The Octavia’s popularity is only in Europe, as all eight of the countries that have it as their best selling car are situated on its home continent.

Best selling car type in the most countries

The hatchback is the most popular style of car, with over 40 countries’ best-selling vehicles being in this style. The majority of the countries where hatchbacks are the top-selling car are in Europe, but there are also a fair few Asian countries and four in the Americas. Perhaps the reason for the hatchback’s popularity, is that they are often smaller more affordable cars.

The second most common best selling car type is the pickup truck, there is just over half the number of countries that favour pickups than those where hatchbacks are number one. There is not a single European nation that the pickup dominates, but they are very popular in Africa, the Americas, and Australasia.

Sports Utility Vehicles, more commonly known as the abbreviation SUV, have been increasing in popularity in recent years due to their perceived advantages over other types of cars. Ranging from very high-end examples such as the Bentley Bentayga and the Rolls Royce Cullinan, to affordable motors like the Dacia Duster. The main regions that favour the SUV appear to be eastern Europe, and Scandinavia.

Best selling cars of all time

The best selling car of all time is the Toyota Corolla, the Japanese family car has sold 47 and a half million units since its introduction in 1966. It has been produced for 56 years, therefore there have been almost 850,000 Corolla’s sold per year on average. This also makes it the best selling car annually of all time, beating the Ford Model-T by just under 60,000 cars sold per year of production.

The Ford F-Series of pickups is the second best selling car model of all time, and the only other to exceed 40 million. The F-150 is the flagship, and it is said that if you were to park every F-150 ever sold side by side, the line would stretch twice around the equator. Impressively the F-Series is the second most sold car model, despite mainly being sold exclusively in the USA and Canada (unlike the Corolla which is sold almost everywhere). On average an F-150 is sold in America every 35 seconds, and over half a million have been shifted each year since 1948.

The Volkswagen (VW) Golf is one of the most multi-functional cars in the world, a medium-sized hatchback that excels in almost every aspect that a car needs. In fact, prominent motoring journalist James May was quoted saying “the (VW) Golf is the answer to everything, and it’s the only car that really needs to exist”. 35 million people have agreed with Mr May when buying a new car in the past 48 years since its launch.