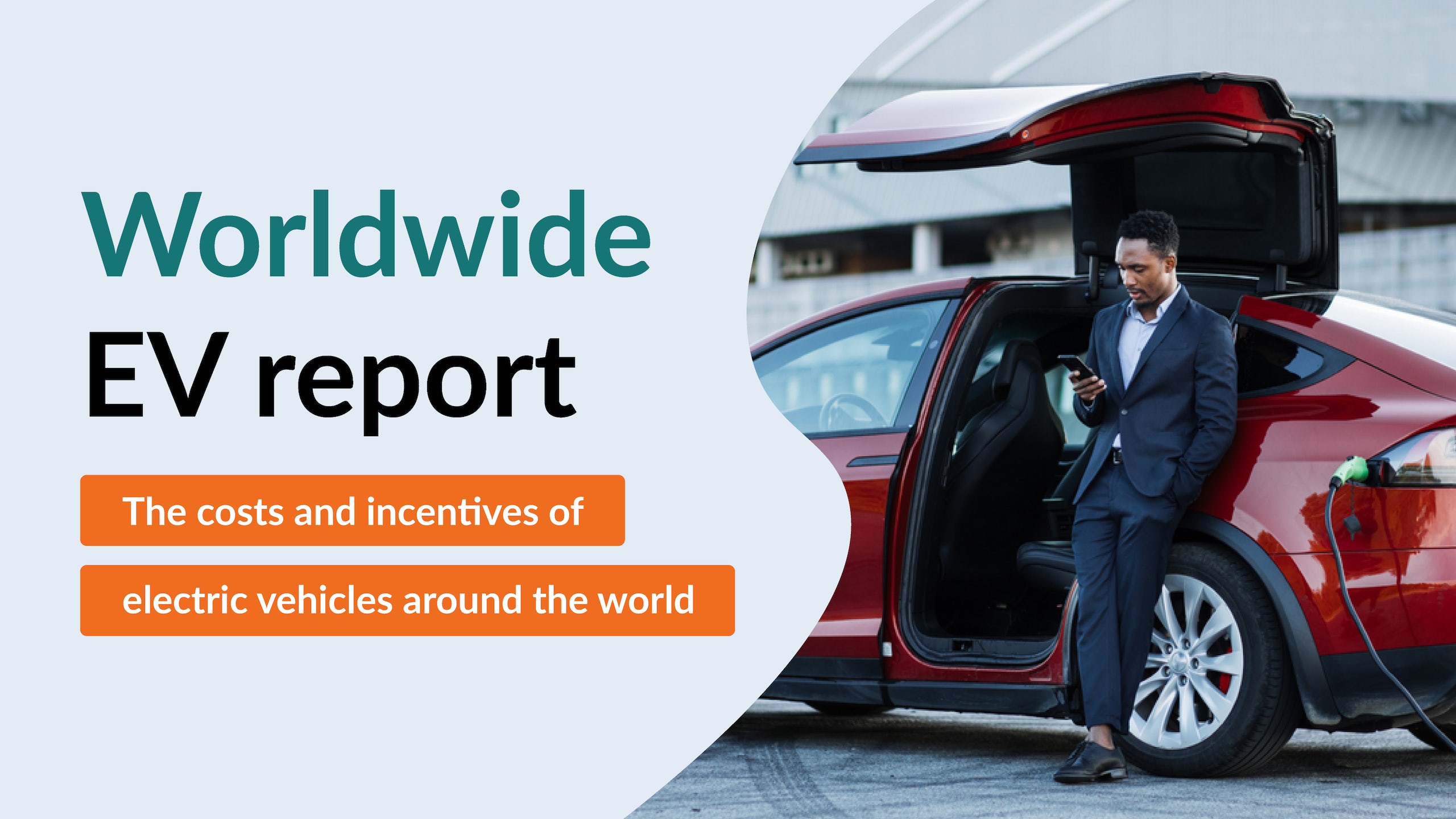 The costs and incentives of electric vehicles around the world

With the ever-present threat of climate change, more and more people are finding ways to reduce their reliance on fossil fuels and shrink their carbon footprint. One of these ways is ditching traditional polluting gas and diesel cars in favour of electric vehicles (EVs). In fact, many people have already adopted electric cars and are using them to learn to drive.

Governments around the world are also encouraging people to make the switch, with the UK going so far as to ban the sale of new gas and diesel cars from 2030, and the US from 2035.

The best countries to own an EV 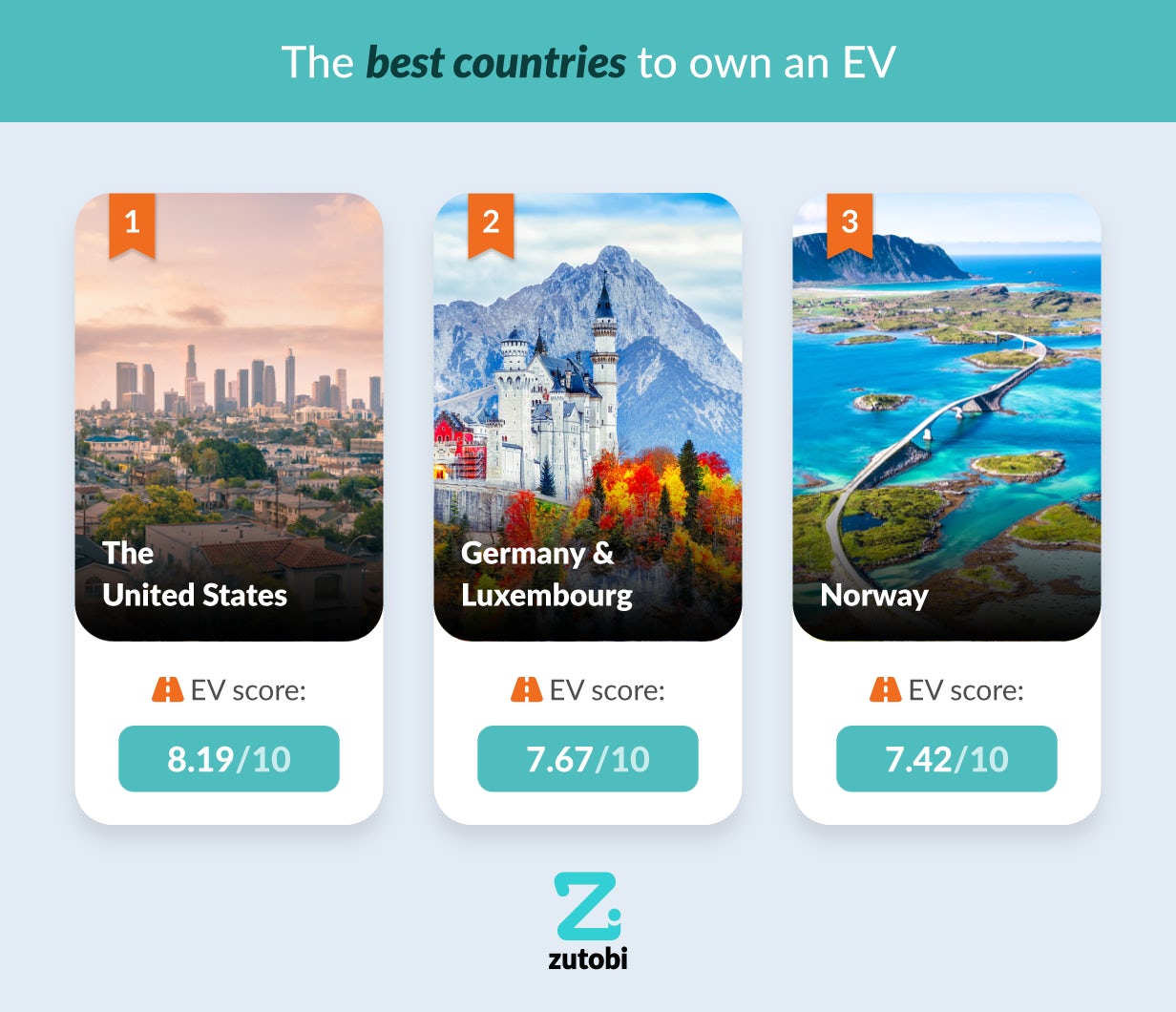 Taking the top spot, the US offers the world’s most popular EV, the Tesla Model 3 at the lowest price, just over $39,000. The US also has one of the most generous incentives for EV purchases, placing in the top five for the factor.

Taking second place as one of the best countries to own an EV is Germany, scoring 7.67 in our index. The country takes the top spot thanks to it having the highest purchase incentives, with the German government offering motorists over $9,000 off the price of a new EV. It also has one of the top 10 highest proportions of EV.

Next up is Norway taking third place in the index with a score of 7.42. The Scandinavian country takes the top spot for both the highest proportion of EVs and the cost of an EV as a proportion of the average income.

The countries with the best tax incentives to buy an EV 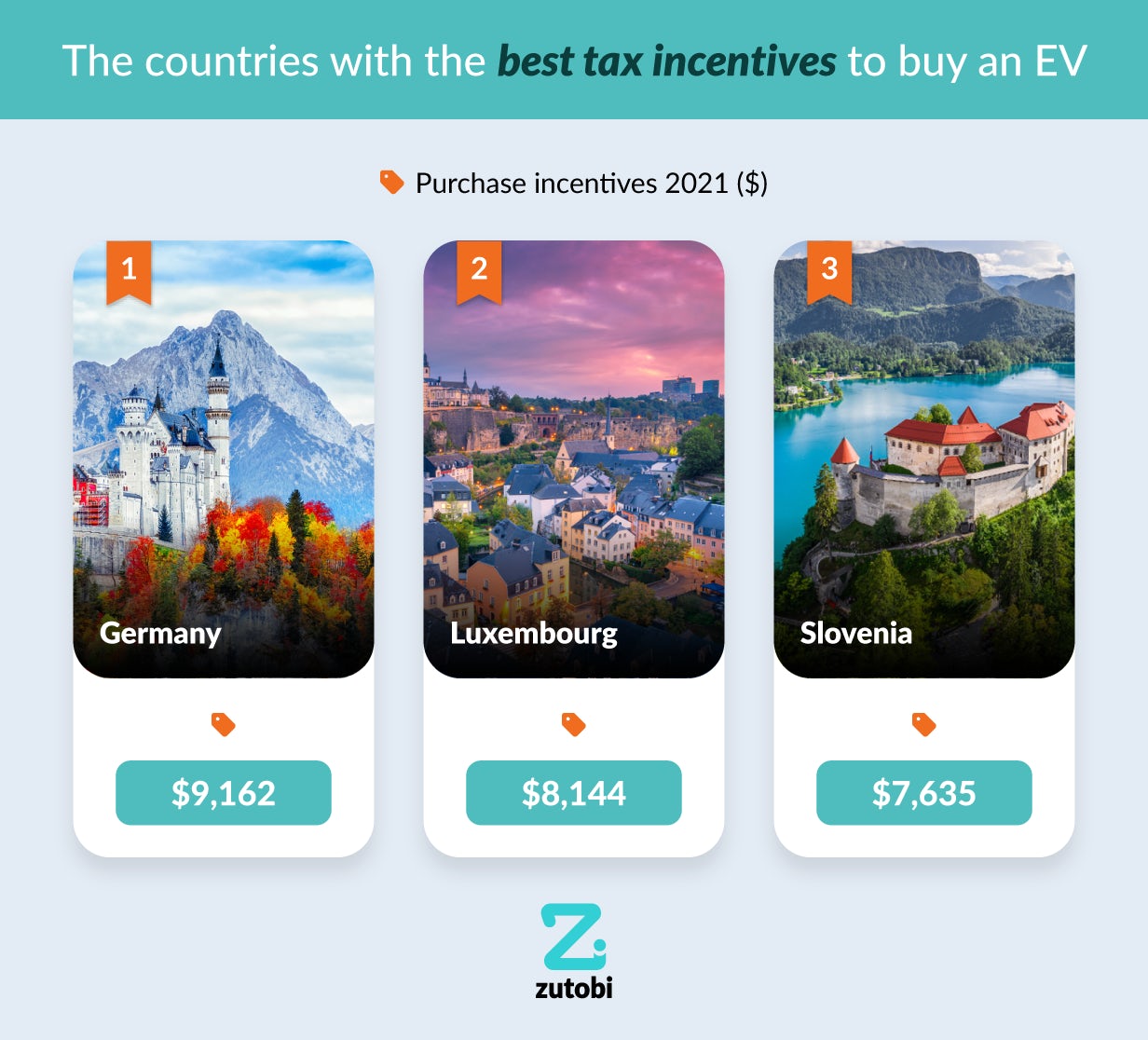 Germany has the most generous incentive for buying an EV, offering a rebate of just over $9,000 for EVs. On top of this, the country also has a reduced VAT rate when buying EVs and EVs are exempt from some vehicle taxes.

Taking second place is Luxembourg, offering motorists more than $8,000 for their EV purchases. The country also charges the minimum tax rate for vehicles with very low emissions, which is excellent news for EV motorists.

Offering over $7,500 in subsidies for EV purchases is Slovenia, taking it to third place. The Slovenian government also only charges its minimum rate of 0.5% sales tax on vehicles that emit less than 100 grams of CO2 per kilometre.

The countries with the highest proportion of EVs 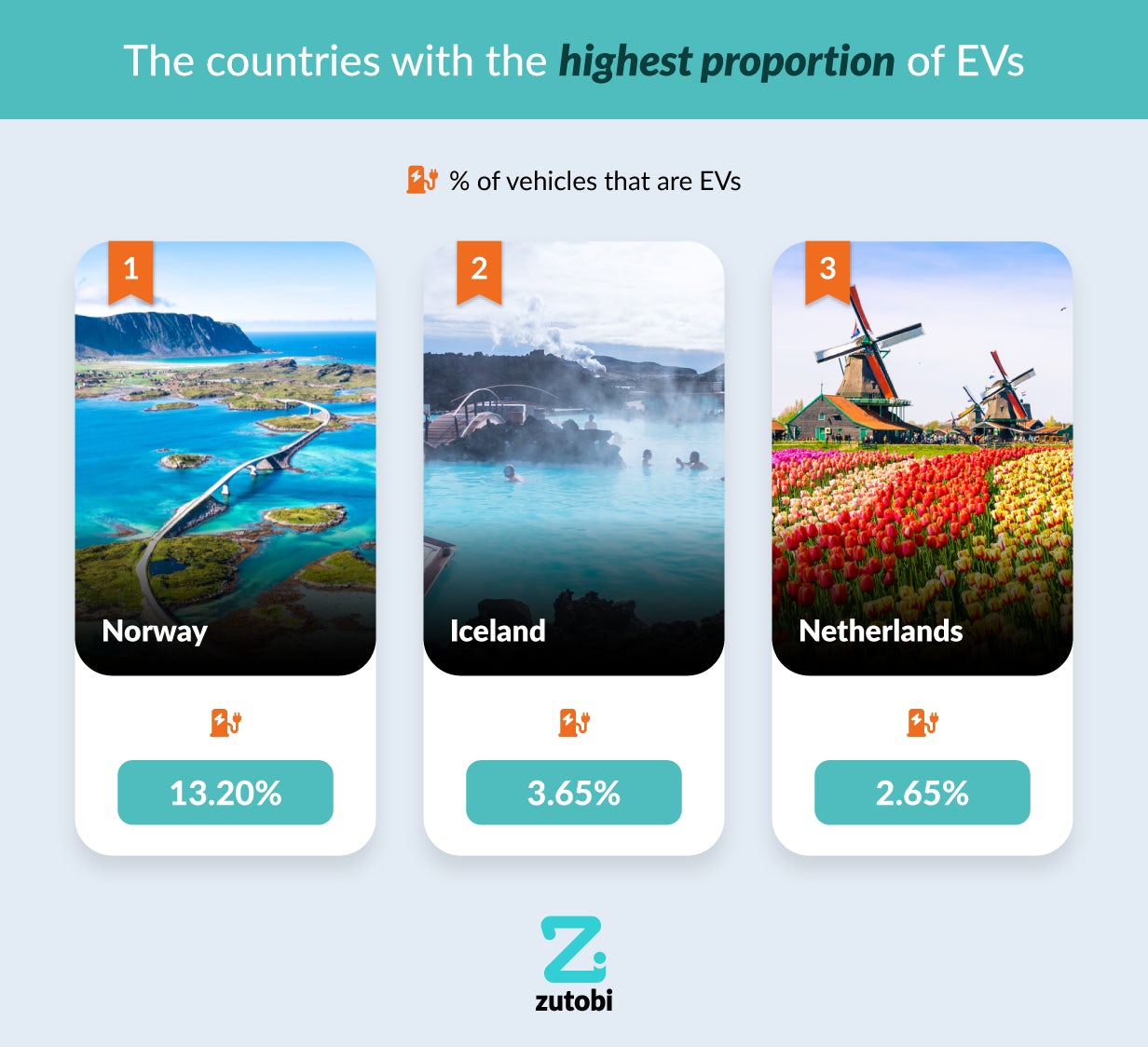 Taking the top spot by a margin of almost 10% is the Scandinavian nation of Norway. The country has encouraged its citizens to buy EVs by taxing new petrol and diesel vehicles heavily and not taxing EVs at all, making them a much more viable option. Norway also aims to ban the sale of all new polluting vehicles by 2025.

In a distant second place is Iceland with over 11,000 of its 300,000 vehicles being electric or 3.65% of its fleet. Iceland is one of the world’s leading markets for EVs thanks to its cheap renewable electricity paired with high gas prices and a high rate of urbanisation. This makes its infrastructure ideal for EVs.

Up next is the Netherlands with 2.65% of its vehicles being fully battery-powered taking it to third place for the factor. The Netherlands is well equipped for its phasing out of new gas vehicle sales by 2030, as it has one of the densest EV charging networks in the world.

The cheapest countries to buy an EV 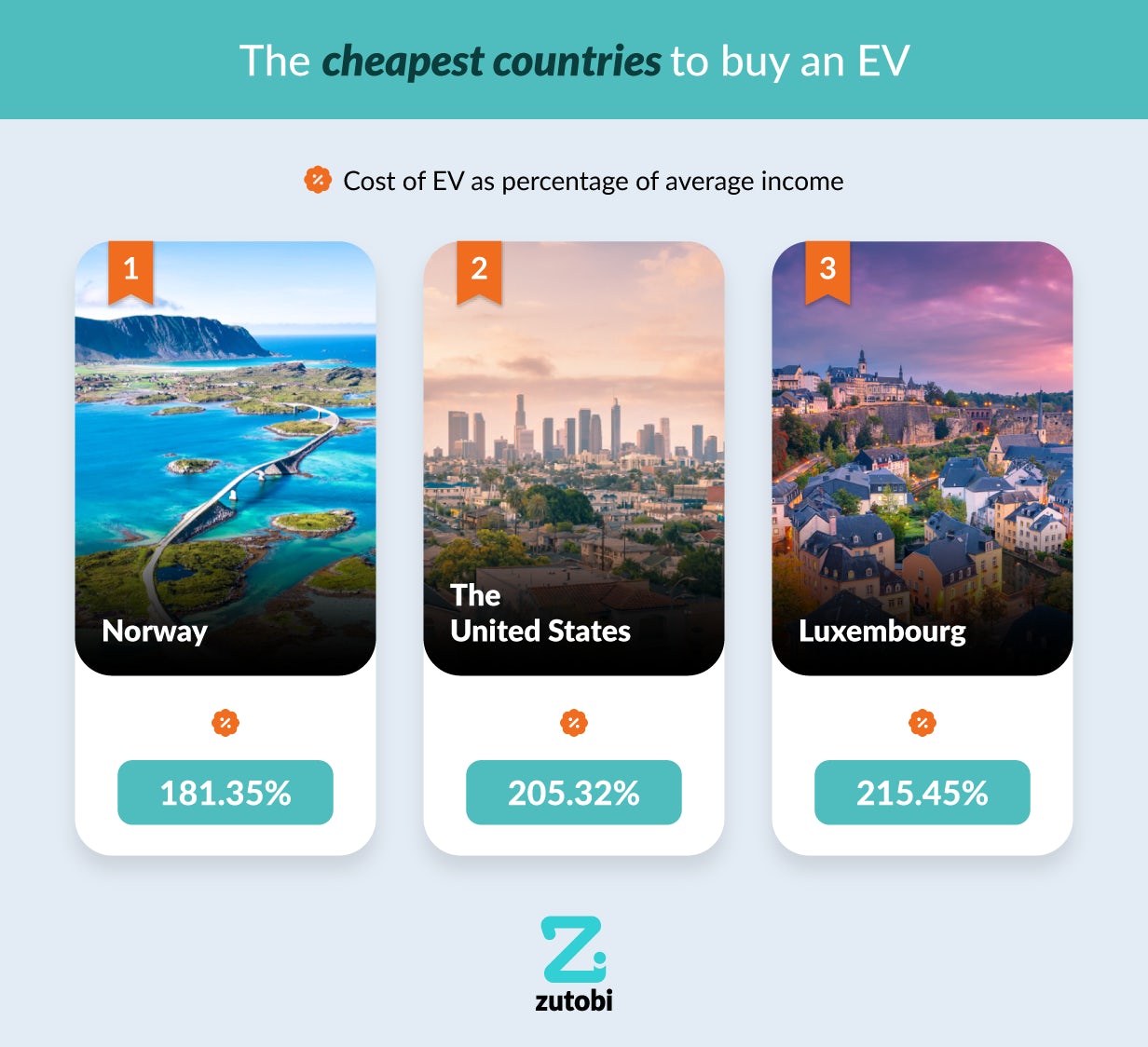 Norway is the cheapest country to buy a Tesla Model 3, the world’s most popular EV when it comes to the proportion of average income. EV motorists in Norway can expect to pay just over $40,000, or 181.35% of the average income in the country for a brand new Tesla.

Up next is The United States, with its citizens paying just over double the average annual salary for a Tesla. It comes as no surprise that the US is one of the cheapest countries, as Teslas are manufactured in the US, meaning import duties and other tariffs aren’t added to its price.

Luxembourg takes third place for EV price as a proportion of the average income, thanks to it having the highest average annual wage of over $26,000. A Tesla Model 3 costs just under $57,000 in the country, or 215.65% of the average citizen’s income.

The best US states to own an electric vehicle 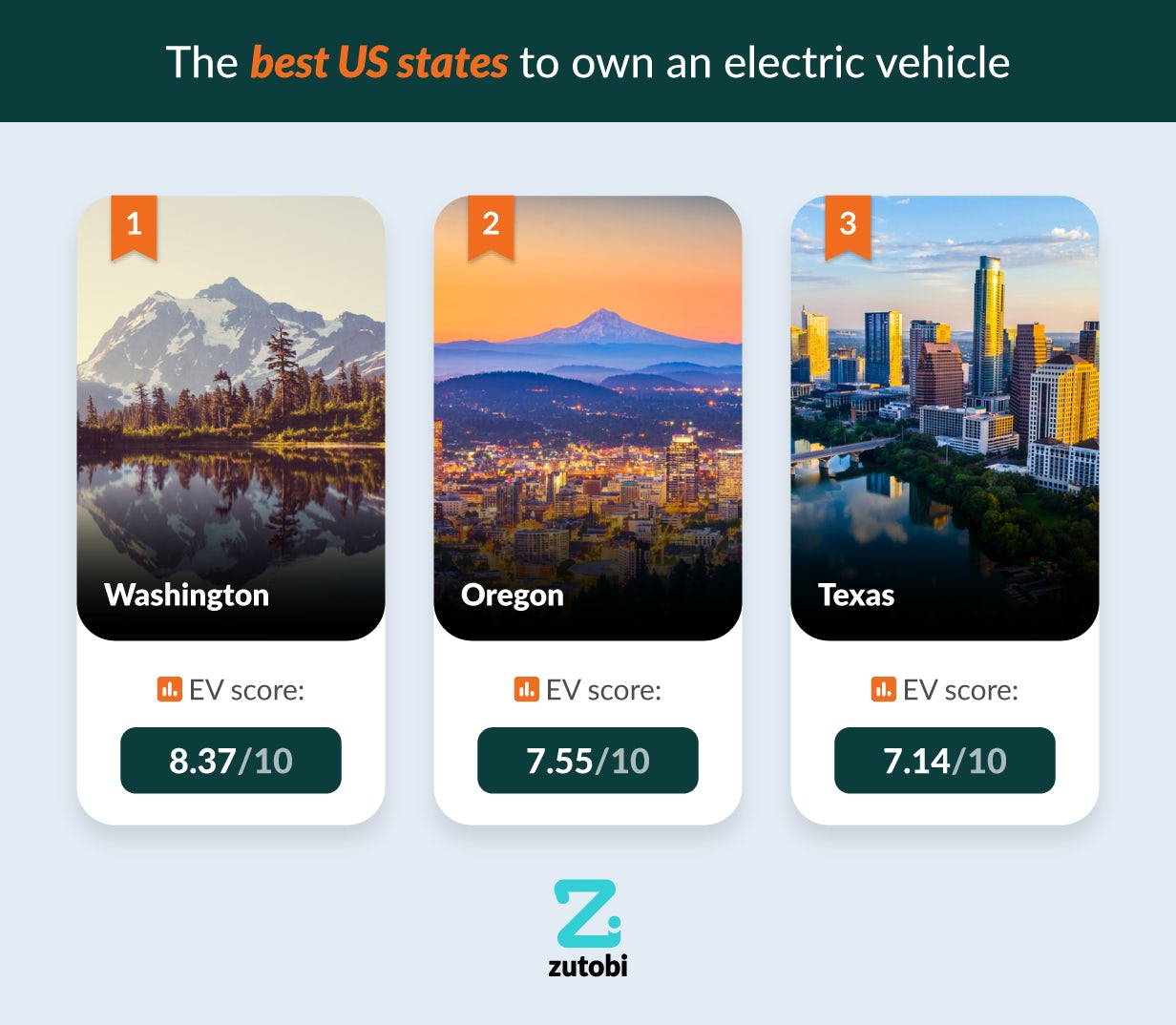 Taking the top spot as the best state to own an EV is Washington. The Evergreen State ranks in the top three for its proportion of EVs, and the top 10 for both charging station incentives and the cost to charge a Tesla Model 3.

Up next is Washington State’s neighbour to the south, Oregon with a score of 7.55. The Beaver State takes second place thanks to its high proportion of EVs, placing in the top five for the factor and its overall strong score on all other measured factors.

The Lone Star State takes third place in the index. It ranks in the top 10 for both the highest purchase incentives and lowest cost to fully charge the world’s most popular electric car. Texas also ranks in the top 20 for its proportion of electric vehicles, at 0.23% of its fleet.

The states with the highest charging station incentives 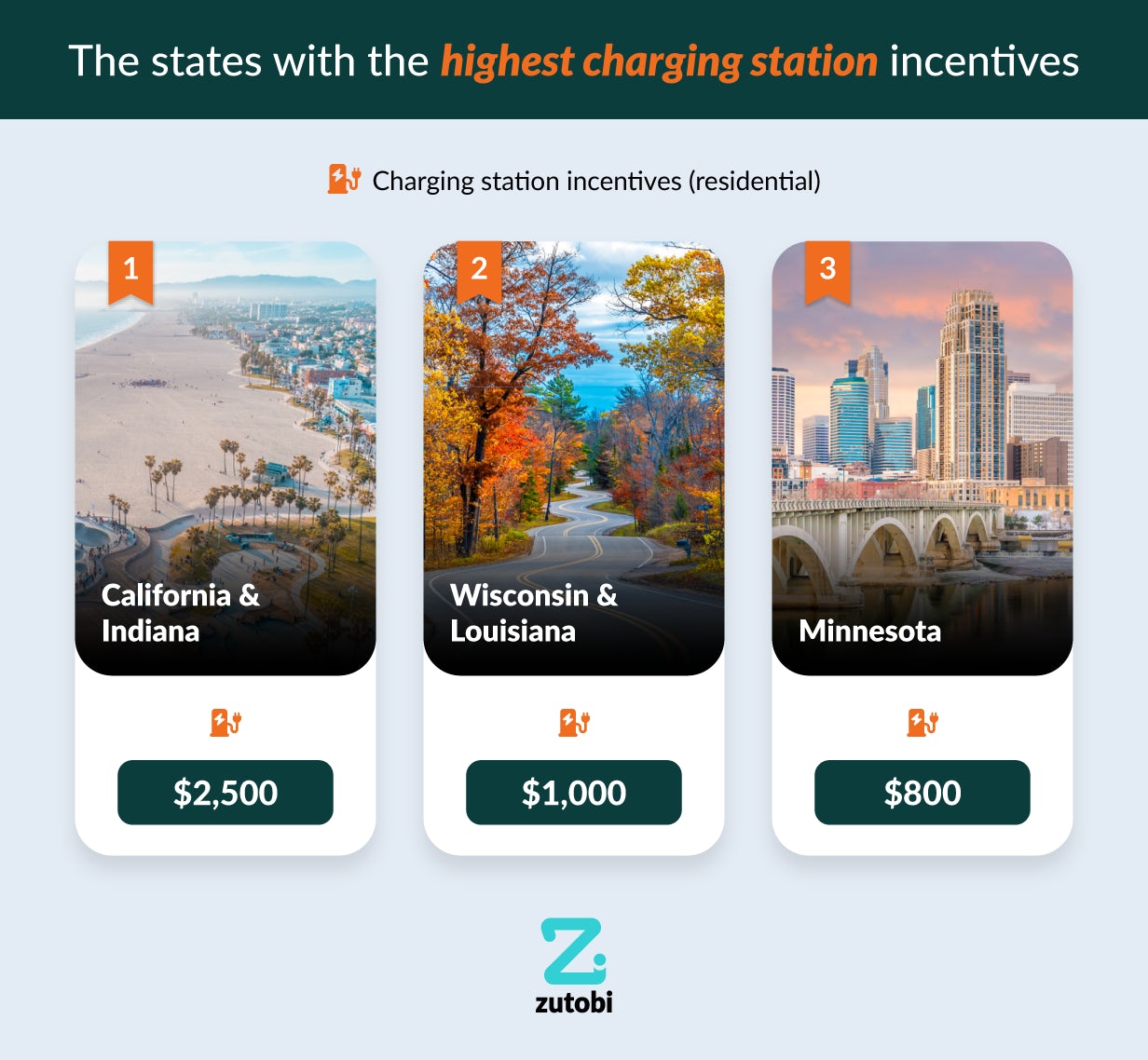 As EVs are still a relatively new technology, the infrastructure needed to power them is way behind that of polluting vehicles, so it’s important that electricity companies offer incentives to speed up the process.

Sharing the top spot as the states with the highest incentives for installing a residential charging station are California and Indiana, both offering residents a rebate of $2,500 to install a charging station.

Helping people install chargers in their homes across the nation is a key incentive in EV adoption, as charging at home during off-peak hours can unlock the full potential of electric vehicles for little more than the price of a fancy coffee.

Nobody knows this more than electricity providers in Wisconsin and Louisiana, both offering residents up to $1,000 in rebates to install charging stations in their homes.

Providing incentives can encourage people to make the switch to EVs from their old polluting vehicles and in the process, help reduce their carbon footprint and be kinder to the planet. Electricity companies in Minnesota know this all too well as they offer residents up to $800 per household to install an EV charger.

The cheapest states to charge an EV 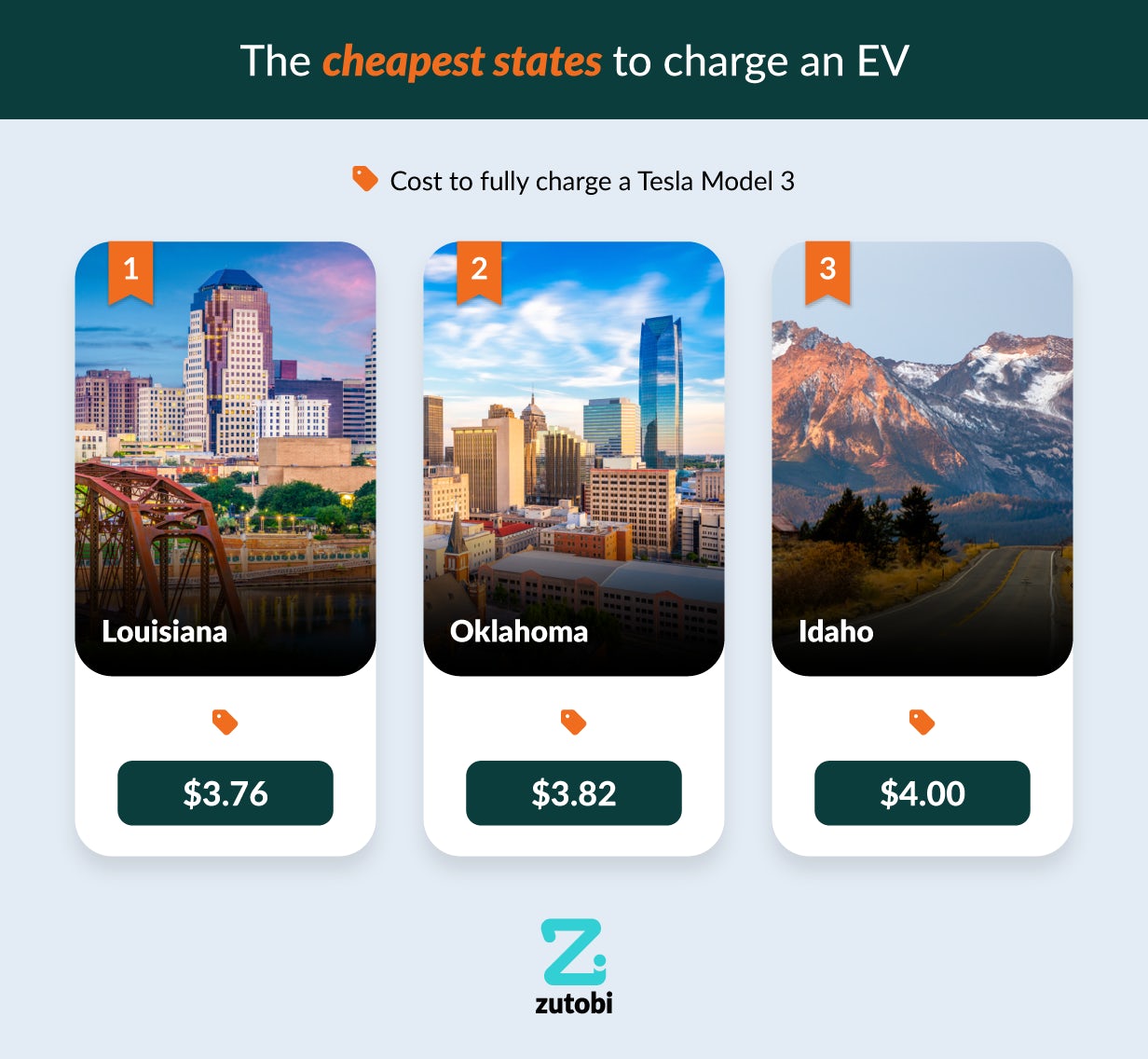 The Pelican State tops the list as the cheapest location to fully charge a Tesla Model 3, the world’s most popular electric car. It costs residents just $3.76 to fill its 50 kWh battery, thanks to Louisiana having some of the cheapest electricity tariffs in the country.

Up next is the southern state of Oklahoma, costing just $3.82 to fully charge a Tesla Model 3, making it the second cheapest. Oklahoma enjoys cheap energy tariffs as a result of the abundance of fossil fuels in the state, which it uses to generate most of its electricity.

Taking third place is Idaho, at only $4.00 to fully charge the world’s most popular EV. The Gem State has some of the cheapest electricity in the nation as the majority is generated through relatively inexpensive and renewable hydropower.

The states with the highest proportion of EVs 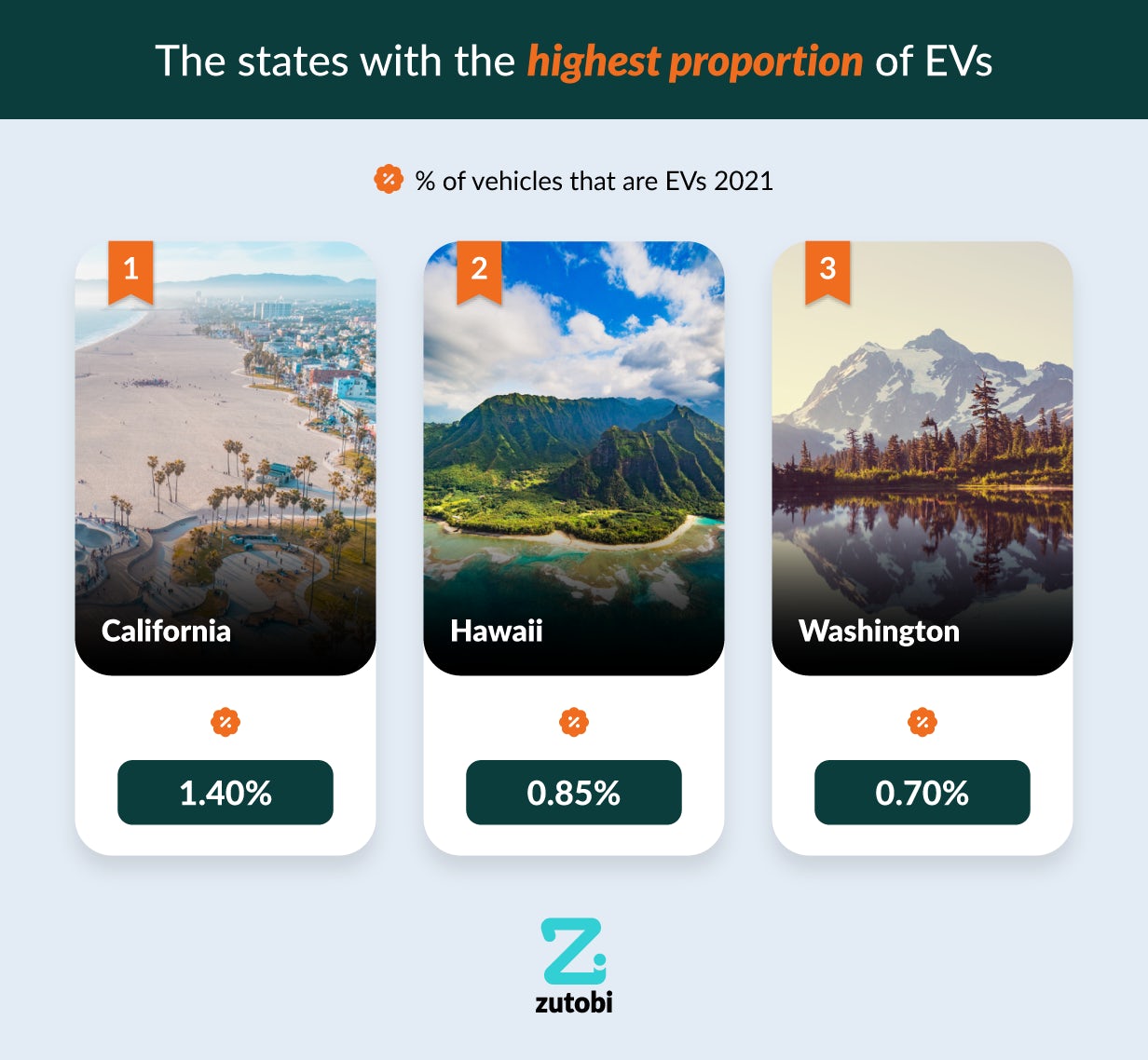 California takes first place for its proportion of EVs, with more than 400,000 EVs registered in the state in 2020 giving it the highest proportion of 1.40%. This comes as no surprise as The Golden State accounts for almost half of the plug-in electric car sales in the country.

Up next is The Aloha State, with 0.85% of its fleet being EVs. Plug-in vehicles are popular in Hawaii thanks to the short driving distances and generous policy incentives from the state government.

Taking third place is Washington, as EVs in the state make up 0.70% of the total vehicles. The state provides plenty of incentives for EV drivers, including high gas prices, cheap clean electricity thanks to its hydropower, and more public chargers than most states.

We wanted to find the best countries and US states for the costs and incentives involved in buying an electric vehicle by analyzing the following factors.

The countries with the best tax incentives to buy an EV: the purchase incentives for buying an EV in each country, taken from The EAMA for European countries and list articles for other countries.

The countries with the highest proportion of EVs: The number of passenger cars in each country divided by the total number of battery electric vehicles, taken from the EAFO and list articles.

The states with the highest charging station incentives: The rebates offered by electricity companies in each state for private charging stations, according to Enel X way.

The cheapest states to charge an EV: The cost to fully charge a Tesla Model 3 with electricity prices in each state according to The EIA.