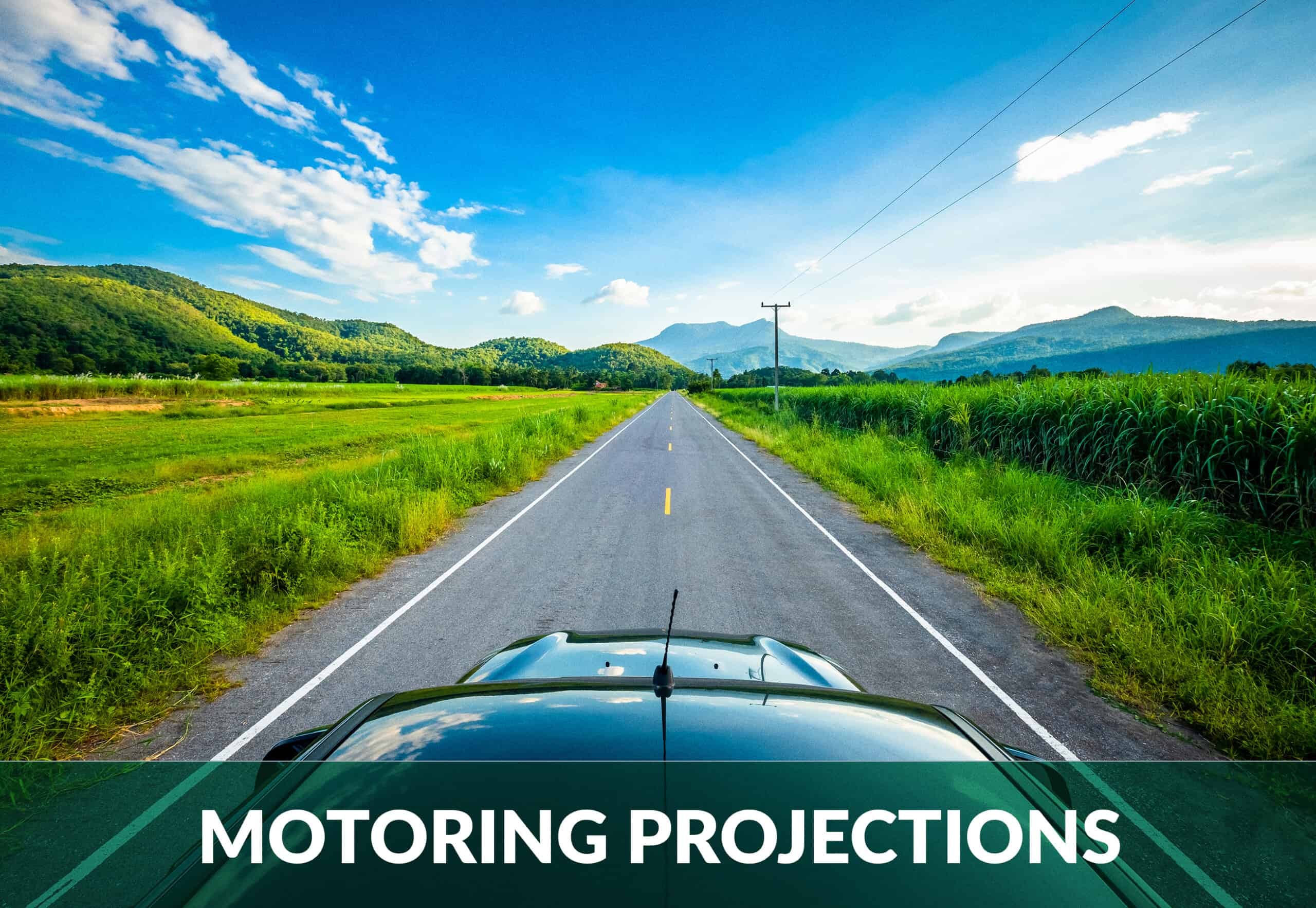 How much will it cost to own and run a new car in ten years’ time?

Predicting the future is never an exact science as anything could happen that we just can’t see coming, therefore we instead have to make educated guesses at how the future will look.

By taking into account the rising costs of owning and running a car in the United States, we have estimated the cost in ten years’ time. Furthermore, we have broken down the data by each individual state to see where the most expensive and cheapest places in the country will be to own and run a car.

Factors analyzed to determine owning and running a car:

The annual average mileage is 14,500 miles, and the F150 achieves an average 25 MPG, therefore you need to buy on average 580 gallons of fuel to run it for a year. Insurance costs per state were the third factor used to project the cost in each state.

To discover how the cost of car ownership has changed across the entire United States in the past ten years and how we predict it will change in the future, we have taken the costs in every state to discover a national average in depreciation, fuel and insurance costs.

Rising Cost of the Ford F150 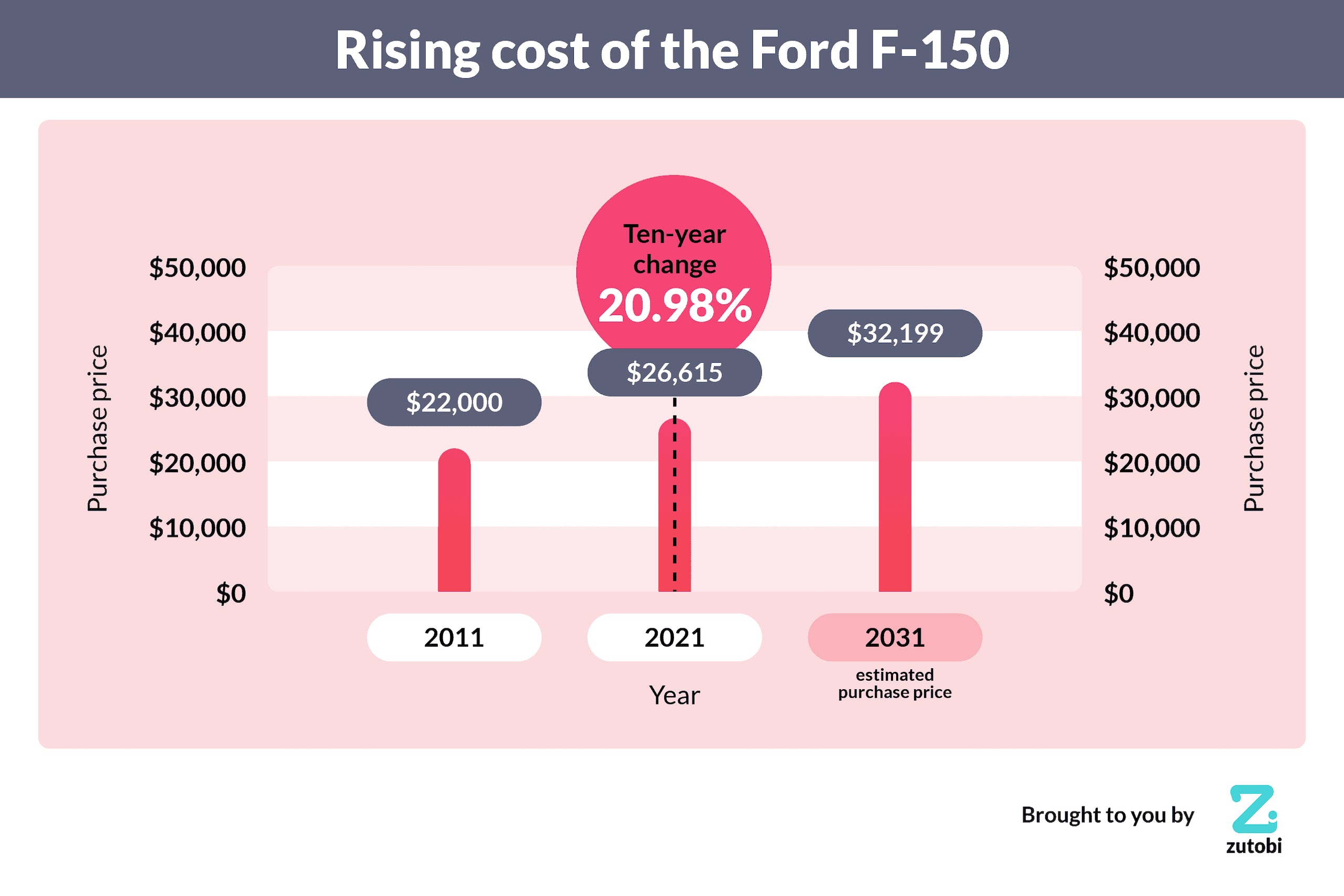 The best-selling car in the USA consistently over the past decades has been the Ford F-150 pickup truck, when it was introduced in 1948 it only cost $1,279. Since then it has become bigger and better, and in 2011 the twelfth generation of the vehicle cost $22,000 dollars when new. Today the price is $26,615, which shows a 20.98% price increase in the past decade. We therefore apply this to the cost going forward and we estimate that the cost will rise to $32,199 in 2031.

Prior to the oil crisis of the 1970s petrol prices in the USA remained stable at 30-40 cents per gallon on average across the country, this is a massive difference compared to the average of $3.03 today.

In 2011 the nationwide fuel price average was $2.90 meaning that in a decade prices had only risen by 13 cents per gallon, this equates to a 4.51% increase in costs. When applying this to our future projections we estimated that fuel costs will only rise to $3.23 per gallon in 2031 providing prices continue to rise at their current rate.

Whilst fuel prices are on the rise across the country, average insurance premiums are actually reducing in the United States. The average cost of insurance in 2011 was $1,550 per annum, which is $145 more than the average cost today of $1,404, when applying this to the future predictions we discover that there is a 9.4% decrease which would result in estimated costs of $1,317 in ten years time.

Back in 2011 California was the most expensive state to own and run a car, with annual costs of $5,785. However, since then, they have dropped to the second most expensive today, and by 2031 they will only be the third most expensive. 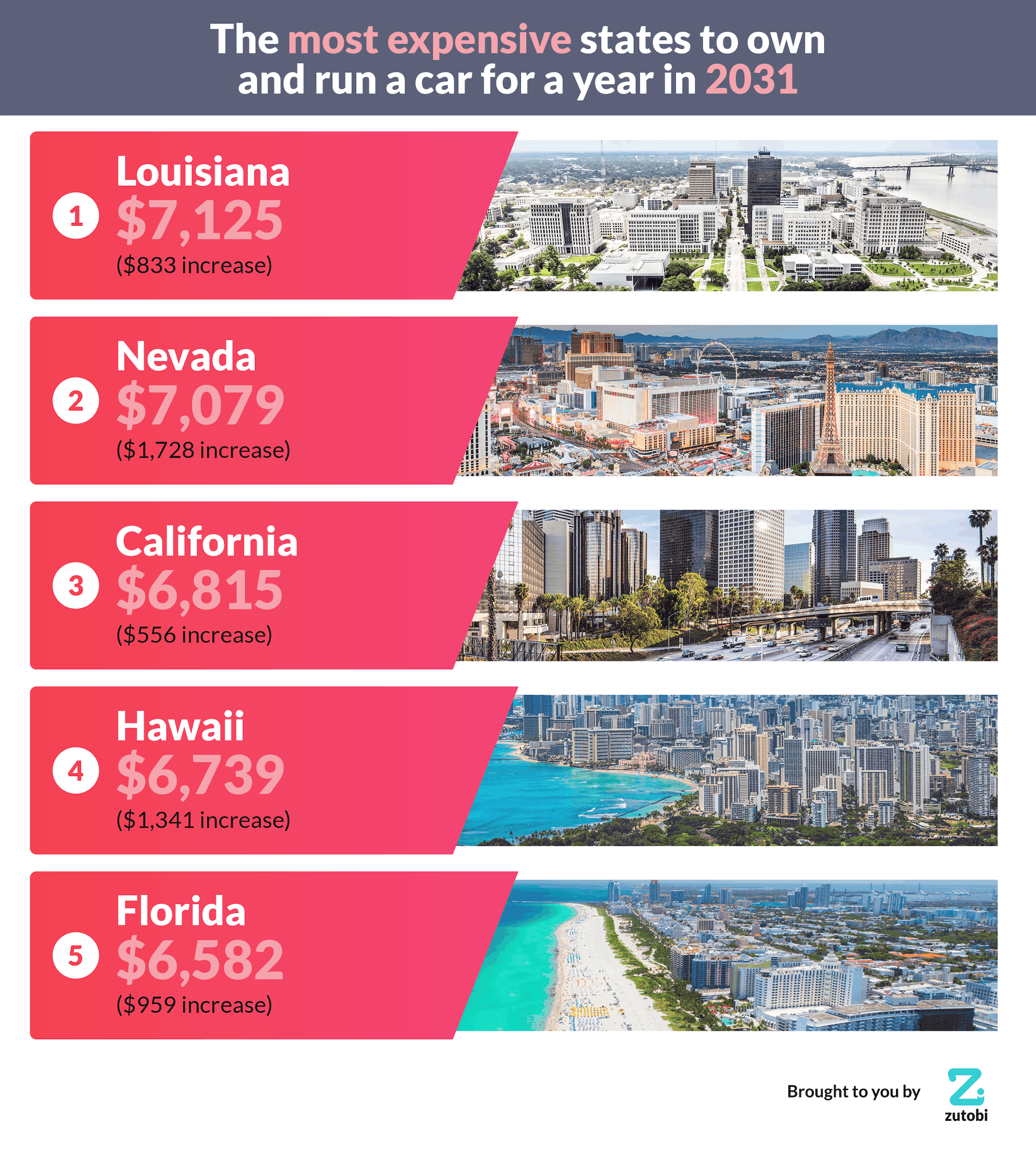 The state that will have usurped California and will be the most expensive place to own and run a car in 2031 will be the Southern coastal state of Louisiana. It will cost just over $7,000 which is over a $800 increase from the current costs of $6,292, Louisiana will also have the current highest average insurance rates, $3,286 in 2031.

Nevada is the state where the cost of owning and running a car for six years is increasing at the fastest rate, consequently, we estimate that the average cost will rise by over $1,700 in the state over the next decade. This estimated increase is largely due to the rapid rise in fuel prices that the state has experienced in the last decade; there has been a 59.6% rise in the price per gallon since 2011, and if this continues Nevada will become very expensive. Incredibly, Nevada was the second cheapest state in 2011, whereas in 2031 it will be the second most expensive.

Today in 2021 California is the second most expensive state to own and run a car for six years, but in the next decade, they will have dropped to third (although costs will still increase by over $500). The golden state is only around $300 cheaper than Louisiana but the gap is increasing.

The first state not on the mainland to feature in the rankings is Hawaii. By the year 2031, it will cost just over an estimated $6,700 to own and run a new F150. Like Nevada, Hawaii will see a large increase of 43% to move it from the 29th most expensive state in 2011 up to the fourth most expensive in 2031.

Florida will be the fifth most expensive state to own and run an F150 in 2031, with costs over $6,500 which is about $1,000 more than the national average is estimated to be. Fuel costs are decreasing by 17%, however, insurance is increasing at 41% (the highest anywhere in the country.

While living in some states will make it incredibly expensive to own and run a car in 2031, there are also some that are very cheap by comparison. Back in 2011, South Carolina was the cheapest state but by 2031 it will have shot all the way up to be in the top eleven most expensive. 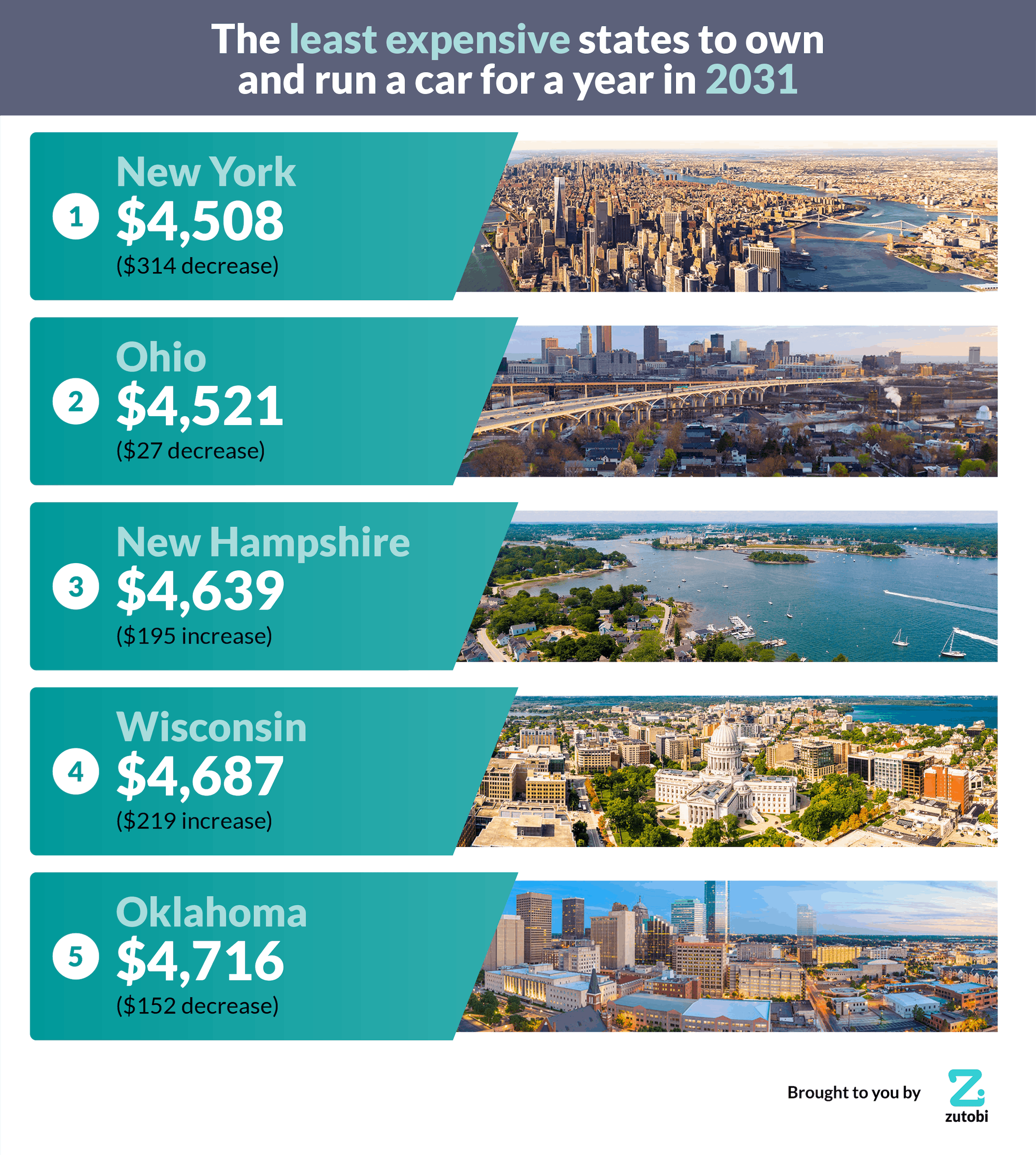 The estimated cheapest state to own and run a car on average will be New York in ten years time, the East Coast state will cost just over $4,500 dollars in 2031. In 2021 New York is only the 13th cheapest state, but low rises in insurance and fuel costs mean it will become cheaper by the start of the ’30s at this rate.

Wisconsin is estimated to be the fourth cheapest state to own and run a car, this is due to estimated average costs of slightly under $4,500. Wisconsin will see the third-lowest total increase in the next decade, as costs will rise by just over $200.

The final entry into the top five cheapest states in 2031 is Oklahoma, by 2031 estimated costs of running a car in Oklahoma will be over $4,700 which is only slightly more than Wisconsin. Although insurance and fuel costs have gone down in Oklahoma over the past decade it has happened at a lower rate than some of the cheaper states above it.

We used a number of factors to calculate the cost of owning and running a Ford F150 in every state today, these factors are: depreciation over a six-year period, insurance, and fuel costs.

We also found figures for these same factors from ten years ago to see the increase or decrease in costs in each state over the past decade.

By following these trends we were able to predict the value of owning and running a Ford F150 ten years from now if current trends continue.

The Ford F150 was chosen as it is the best-selling car in the United States of America.