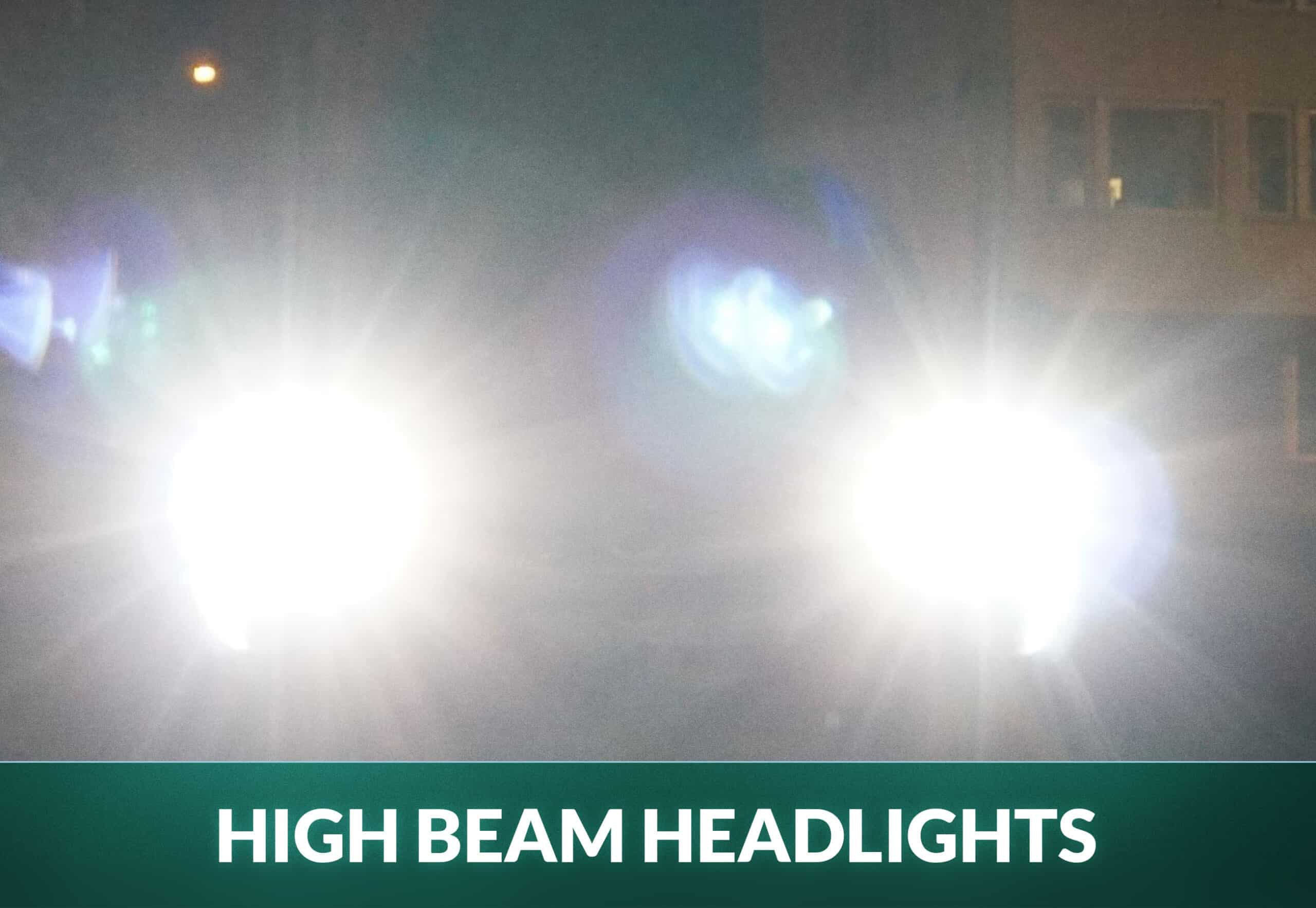 High-Beam Headlights 101: Everything You Need to Know to Be a Safe Driver

In this guide, we’ll cover everything about high-beam headlights and how you should use them.

What are High Beam Headlights?

Tip: You must be able to stop within the distance of your lights, or it will be too late to stop without hitting an object by the time you see it.

While high beam headlights provide more light than low beams, the light is strong enough to temporarily blind other drivers and pedestrians if used incorrectly. To prevent blinding other drivers, all states have specific requirements that regulate when you may use high beams and when to dip or switch them off (i.e. turn to low beams).

When to Use High Beam Headlights

High beams light up far more of the road than low beams and enable you to see much farther ahead when dark. They drastically increase the chance of you seeing an object or hazard on or near the road.

We’ll go through when you may legally use high beams below.

1 – In urban areas with low visibility

Even within urban areas, the roads can be dark with low visibility. You can use high beams to see further ahead if you are driving in an urban area without street lighting. Using high beams in those situations will make the roads safer for pedestrians and bicyclists on or near the road.

Be prepared to dip your headlights to avoid blinding other drivers.

On any country roads or rural areas with sparse street lighting, you should use high beams as often as you can. They will allow you to drive much safer and with more confidence. The additional light will allow you to see animals on or close to the road and, more importantly, pedestrians and bicyclists walking on the edge of the road.

Use high beams when suitable on interstate highways but be prepared to dim when necessary to avoid blinding other drivers.

When To Dip Your High Beam Headlights

As high-beam headlights can also blind other drivers, you need to dip your them before you risk blinding other drivers. The exact distance to other vehicles will vary from state to state.

In general, high beam headlights must not be used within:

Oncoming drivers sometimes forget to dip their high-beam headlights when passing. To avoid being blinded, you can look toward the right edge of your lane and watch the position of the oncoming vehicle out of the corner of the eye.

How Far Will High Beams and Low Beams Let You See?

Don’t drive too fast at night as your stopping distance may be longer than your visibility!

Driver fatigue, or drowsy driving, is the feeling of being tired, sleepy, or exhausted when driving and is a major cause of crashes. It affects everyone regardless of driving experience, but experienced drivers are often better able to avoid fatigue by knowing when to take a break. Fatigue can slow your reflexes, affect your attention, […]

If you’ve been driving for any length of time, you’ve probably encountered dangerous drivers. Screaming, vulgar language, and even violence have become more frequent on the road in the last few years.  In this article, we’ll go through what causes road rage, if you’re susceptible to it, and how you can avoid it. What is […]

When you’re driving down the street, it’s hard not to notice the many road signs along US city and suburban streets. While a few of them are quite self-explanatory, the majority may require a bit of explanation to fully understand. Knowing your road signs is not only important for your knowledge of driving, but for […]